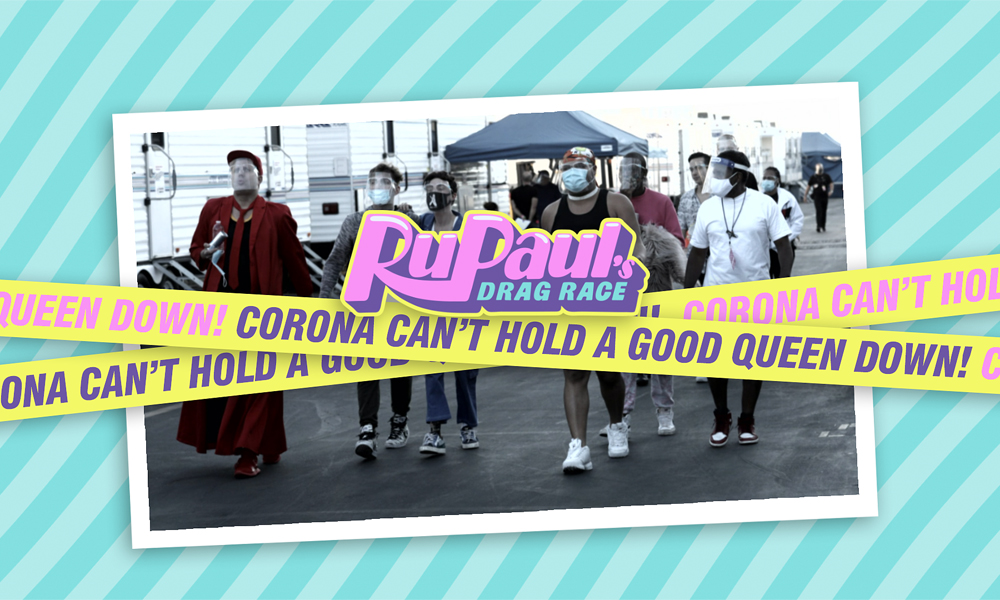 Category is: following Covid-19 safe protocols. What we learned about producing Drag Race during the age of masks and social distancing…

Under normal circumstances, producing a show like RuPaul’s Drag Race is a complex job. Between planning challenges, and securing iconic guest judges, there are so many moving parts to making sure this show happens. Producing a critically acclaimed, and highly anticipated 13th season of a reality show in the middle of the COVID-19 Pandemic provided both the crew, and the queens with unique challenges. Instead of a new episode this week, Drag Race fans were treated to a 40-minute documentary centred around the unique challenges the crew faced while filming the current season titled Corona Can’t Keep a Good Queen Down. After filming both the reunion episode, and the grand finale of season 12 remotely from each of the queen’s homes, the production crew had to work fast to figure out how to make season 13 happen. But there were a lot of new obstacles to work around to make sure the show was as close to normal as possible, while still following necessary protocols to keep everybody involved safe. Here are a few things we learned about the process of filming season 13 during a global pandemic.

The queens only had five weeks to prepare for the competition
The season 13 queens got the call about five weeks before production on the season began. Even if we weren’t in a global pandemic, five weeks isn’t a whole lot of time to prepare for the biggest race of their lives. There are dozens of looks to plan and prepare for. But getting everything together for Drag Race when everything is closed, and you can’t really leave your house presents a whole new set of challenges. The season 13 queens had to get really crafty while planning and constructing their looks. Utica took apart old looks to make new ones, Gottmik ventured to the only Santee Alley fabric store that was open in a DIY hazmat suit, and Rosè bought 10 pairs of the same shoe, and had to paint them to match outfits. On top of dealing with the regular obstacles of shopping during a global pandemic, there was also a global lace-front wig shortage. Despite all of these challenges, the queens made it work, and created sickening looks to wear on the runway. It also gave a lot of them a chance to get back to the roots of drag, giving them a new appreciation for what they do. 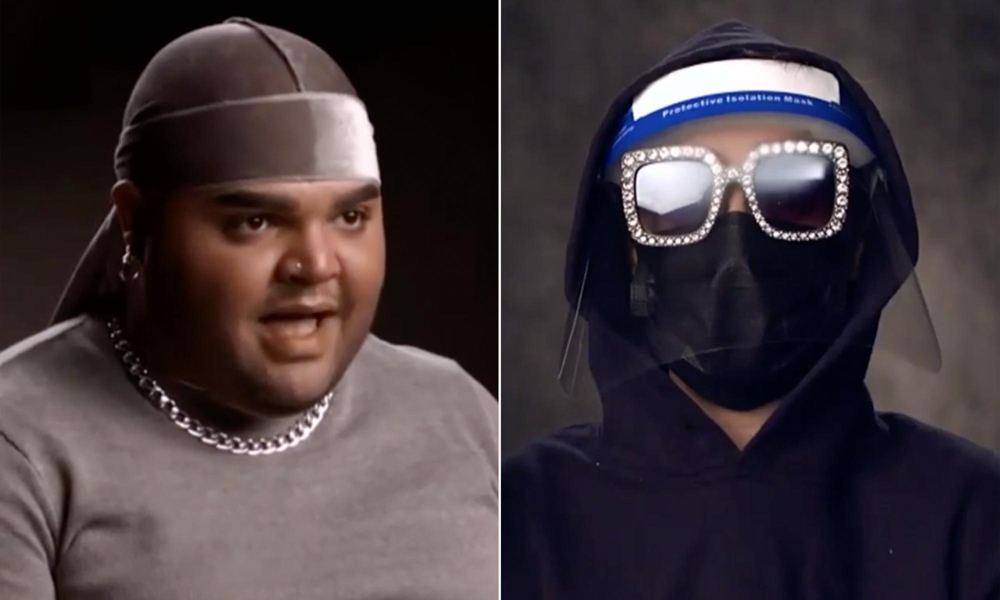 Some of the queens tested positive for Covid-19
As the world watched the virus spread in early March 2020, nobody could have imagined where it would take us. Some of the NYC queens described being eager to go out and perform that last weekend before the world went on lockdown because they knew it might be the last time they would be able to for a while. Queens Kandy Muse, and Olivia Lux both contracted Covid-19 while living in New York during those first few months of the pandemic (Kandy suspects she got sick from attending that last performance). Southern queen Tamisha Iman, who had been following the spread of the virus since the late fall of 2019, had been terrified of contracting the virus while in remission from her battle with cancer. Tamisha ended up testing positive for Covid-19 following the filming for the season, but said her symptoms were thankfully very minimal. It goes to show how vastly different, and scary this experience can be for everybody.

The Work Room set was modified to meet social distancing requirements
Olivia Lux described the feeling of walking into the work room for the first time as magical even before realizing that it had been completely overhauled in order to meet proper social distancing requirements. It was made larger by eliminating the separate Untucked set, to give the production team room to space tables, and workstations out properly. Not to worry though, the Untucked couches were moved into the main workroom. Fans of the show will also notice that other familiar elements of the competition had been altered in order to keep the cast and crew safe. There are plexiglass screens between each of the judges out on the main stage. The camera crew and production assistants are required to wear masks and face shields while filming (duh), but also stay six to twelve feet away from the queens, and behind plexiglass while filming. The queens said they were each tested 3 times a week, with almost 2600 total tests administered to both the cast and crew throughout the whole season. Confessionals were filmed with producers via iPads, and Jeffrey Bowyer Chapman was green screened in remotely for the RuPaulMark Channel challenge.

As we’re halfway through the season, fans will also have noticed that the usual weekly tradition of a new guest host has been traded out for a small rotation of guests. The queens explained that this gave the judging panel more of a family feel, and admitted it was nice to see the same judges multiple times throughout the competition. This allowed the guest judges to see the queen’s growth, which not only provided them with context, but also allowed them to give valuable critique on the panel. In addition to the guest judge pool shrinking, in an attempt to keep the amount of people on set as small and essential as possible, it also meant that the beloved pit crew would be sitting this season out. This of course made both the queens, and fans very upset. Hopefully they will make their triumphant return next season. 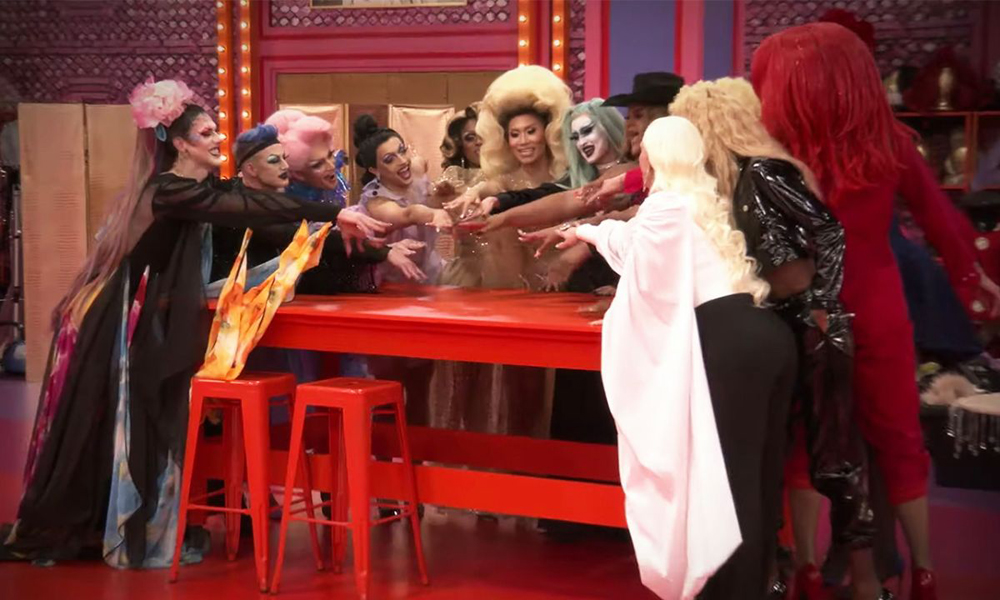 The hotel quarantine was tougher than past seasons
Even during filming past seasons of Drag Race, the queens are usually sequestered in hotel rooms between filming episodes without any contact to their friends and family on the outside. While being away from loved ones isn’t a new concept for anyone right now, it was especially hard for queens of season 13. Although they couldn’t contact anybody back home, they had access to the news. As they would watch the daily numbers rise on the news, they had no way of checking in with loved ones back home to make sure everybody was safe. As tough as it was to be away from family, the cast said there were a lot of perks to their strict quarantines too. Being under lockdown between episodes provided the queens with the opportunity to spend their time together filming without masks, and the ability to provide each other with human touch, which I think we’ve all been desperately craving of over the last year. Many of the queens said that the crew had done such a good job at keeping everybody safe, and making the queens feel comfortable that it was actually scary to go back to the uncertainty of the real world.

The queens knew how important using their platforms to advocate would be before filming
It’s no secret that once you’re a Ru girl, your life is changed forever. Even if you’re the first one voted off the island, the exposure you gain from being on the show can be life changing. The queens aren’t afraid to speak up about the causes close to their hearts. Following the death of George Floyd, and the Black Lives Matter protests all over the world in the summer of 2020, Olivia Lux knew that being on the show would give her a chance to use her platform to make a statement and get political. Olivia stated even the simple act of walking into a room in drag is a political statement, she knew how important it would be to speak up on specific issues before even stepping into the work room. It’s something a lot of the queens this season have done with their newfound fame. Kahmora Hall described the fear she had early on in the pandemic about the discrimination Asians were dealing with. This has become a major issue across North America with both Canada, and the United States reporting a large increase in xenophobic attacks and harassment against the Asian community over the last year. Kahmora has been using her platform to amplify, and uplift Asian voices in a time where it is more important than ever to do so.

Throughout the documentary, Drag Race was lauded with being an incredible escape during such a dark time of uncertainty. It served as an important reminder that we’re really all the same. When the world was shut down, our favourite queens were out of work. They embraced new technology as a way to perform and connect with others digitally. They were separated from loved ones that were essential workers, fighting on the frontlines. This break in regular programming reminds us that even the most famous person you can think of is also experiencing what you are right now. Joey Jay got an emergency alert on his phone while filming an interview. Tamisha Iman described how she would disinfect and dispose of grocery bags in an attempt to keep things clean, and LaLa Ri experienced frustrating technical difficulties while filming confessionals through an iPad screen. Every single queen expressed the fear they felt over the past year, and we all felt it too. Season 13 was one of the first major reality productions to go ahead during Covid-19, and although this experience was trailblazing and unique, according to the queens it was also very special. To be able to be a joyful escape for people during such a dark time is not lost on them. Eventually these times will hopefully be a distant memory, and we will get back to living our lives bringing everything we learned during this time with us. In the meantime, drag queens will continue to be that escape, and Drag Race will bring us a sliver of our Friday night normalcy. After all, Corona can’t keep a good queen down.