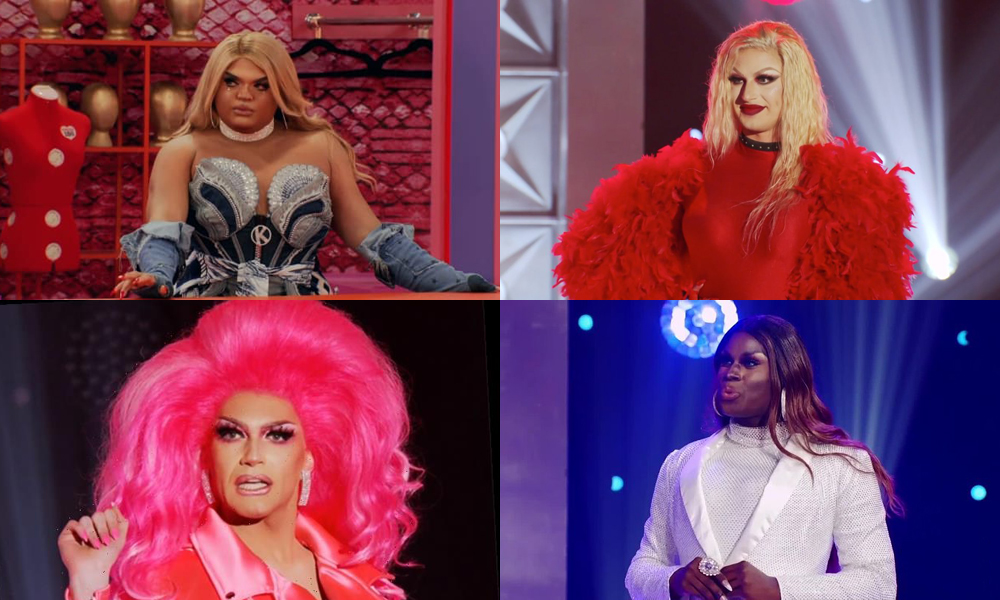 Happy Ru-Year! 2021 is here, and so is a new season of Drag Race! Start your engines, because season 13 starts with six lip syncs…

Happy Ru-Year! Last night we said goodbye to 2020, and hello to what will hopefully be a better year. Luckily for us, RuPaul’s Drag Race is back with a whole new season to kickstart the new year. It feels like it was just yesterday our reigning queen supreme Jaida Essence Hall was crowned during the season 12 finale, and I’m ready to see what this new season has in store for us. Along with a whole new season, we have 13 gorgeous new queens to get to know! Ru has promised fans this season has a lot of twists and turns, including not one, not two, but six lip syncs during tonight’s episode! Start your engines, and let’s get into it!

This week’s premiere episode opens where all of our episodes do, in the legendary werk room. First in the room is New York’s Kandy Muse. Kandy’s entrance look was drag New York streetwear denim fantasy, and we are eating it up. Kandy comes from the former house of Aja. Second in the werk room is Joey Jay. Joey’s all red look is show stopping and shedding all over the floor. Joey isn’t a full-time queen (yet), but I’m sure that won’t be for long. Following Joey’s entrance, the two queens are interrupted by a message from Ru. Kandy is confused. Joey is confused. I am also confused.

Out on the main stage, Ru makes her 2021 entrance, as well as the judges, and their Covid-safe plexiglass dividers. Bank teller realness. This can only mean one thing… the queens will be lip syncing as they come in pairs. Ru explains that some will stay in the competition, and some will sashay away. This could either be legendary, or a very short season. The judges get to know the queens quickly before lip syncing to Carly Rae Jepsen’s Call Me Maybe. The first lip sync of the season is off to a fun and colourful start. Following the performance Ru decides that Kandy Muse is the winner, while Joey Jay gets the “pork chop”, and exits the stage.

The first in the werk room of the next pair is Denali. When she’s not in drag she’s performing on the ice as a figure skater, which totally explains her choice to walk into the werk room on ice skates. Next up is LaLa Ri. This pair is matched exceptionally well in white. Once again, the new pair are called to the main stage for their lip sync. Out on the stage, the judges get to know Denali and LaLa Ri. Denali tells the judges she identifies with Tonya Harding (if you know what she means), and Denali explains the bodysuit/blazer combo she’s decided to wear. The pair lip sync to When I Grow Up by the Pussycat Dolls. Denali does her lip sync in her ice skates, which is the most impressive footwear I’ve seen in a lip sync since Robbie Turner performed one on roller skates in season 8. In the end LaLa Ri was declared the winner, while Denali was given the pork chop, and it was at this point that I knew something was up. Once she leaves the stage she meets up with Joey at the Porkchop Loading Dock, which is decorated beautifully with photos of all of the first queens to go home from previous seasons.

Back in the werk room Symone makes her first appearance, wearing one of my favourite entrance looks of all time (a mod mini dress made entirely of polaroid photos of herself). Next in to complete this pair is Tamisha Iman. She’s a mother figure for sure, but she came to slay. The two make their way to the runway to meet the judges, and lip sync. Ru may have dated Symone’s grandfather, and Tamisha tells the judges she’s been doing drag for 30 years! Not only has she been doing the thing for a minute, but she reveals she was originally cast on season 12, but she left the competition before it even started in order to receive treatment for colon cancer. Tamisha is here for season 13, and she is ready to show the world what she’s made of. The two queens lip sync to Janet Jackson’s The Pleasure Principal. And after an electric performance, Ru decides to keep Symone, and sends Tamisha Iman to the Porkchop Loading Dock.

Back in the werk room we are introduced to Gottmik, who along with being a walking piece of art is the show’s first transgender man to compete on the show. Next into the werk room to finish this pair is Utica Queen. She’s giving me lovechild of Thorgy Thor, Crystal Methyd, and Gigi Goode. The pair move out to the mainstage, where they lip sync to the iconic Rumours, by Lindsay Lohan. Following their performance Ru announces she’s keeping Gottmik and sending Utica Queen to the room with the other eliminated queens. We are once again transported back to the werk room where we meet comedy queen Rosé. Rosé explains that she is a singer (she’s in a band with last season’s Jan), and dancer, which should fare well for her if she makes it to the Rusical episode (lip sync pending). Next in the werk room to complete this pairing is Olivia Lux. She’s a diva, but a nice one. These two queens are once again surprised to have to head out to the main stage so soon. After getting to know the judges, the two lip sync to Elle King’s Ex’s and Oh’s. Rosé and Olivia put on a show, and following their lip sync Ru announces that Olivia Lux is “staying”, while Rosé is sent back to the Porkchop Loading Dock.

Following Rosé’s swift exit from the stage, we’re brought back to the werk room one last time to be introduced to our final pair. First in is New York’s own Tina Burner! Kahmora Hall is next to enter the werk room looking stunning in an orange gown. But it wouldn’t be Drag Race without one final twist though… this pair is actually a trio! Last to enter the room, and the final queen to round out the season 13 cast is Elliott with 2 Ts. Out on the main stage the judges get to know the queens. Tina Burner was in a boy band as a teen, Elliott loves an 80s throwback (not shocking), and Kahmora is wearing original Bob Mackie (wow), and is the younger sister of last season’s winner Jaida Essence Hall. The final three lip sync to Lady Marmalade, the Christina Aguilera version. After the trio is finished their performance, Ru announces that Tina Burner is staying, while Kahmora and Elliott are both getting the “pork chop”, sending them to the super-secret back room with all of the other confused eliminated queens. Back in the werk room all of the lip sync winners sip their victory cocktails and rejoice in their conquests of the week. The cast is split in half, but neither group knows what’s going on.

Back in the porkchop lounge, Ru’s voice comes over a speaker letting them know that a van will be picking them up shortly. Bummer. But it’s not over until it’s over and something is still up. After Michelle tells Ru she’s just eliminated half the cast, Ru comes back on the speaker to tell the queens they still have a chance to compete this season, but they have to first give one of their fellow queens the final chop. Which is exactly where the episode ends. So it looks like we’ll have to find out what happens next Friday.

Front runners of the week: We only saw our queens in one look, and we didn’t get to spend a lot of time with them. Going off first impressions I have to give it to Gottmik, Utica Queen, and Symone.
Most memorable catchphrase of the week: “The lady said… GO HOME” -Tamisha Iman on thinking she was actually being sent home, multiple times (expect more memorable quotes from Miss Tamisha Iman throughout her time on the season).
What we’ll see next week: The queens perform a group number, the queens eliminate one of their own, and more twists and turns ahead! See you next week!