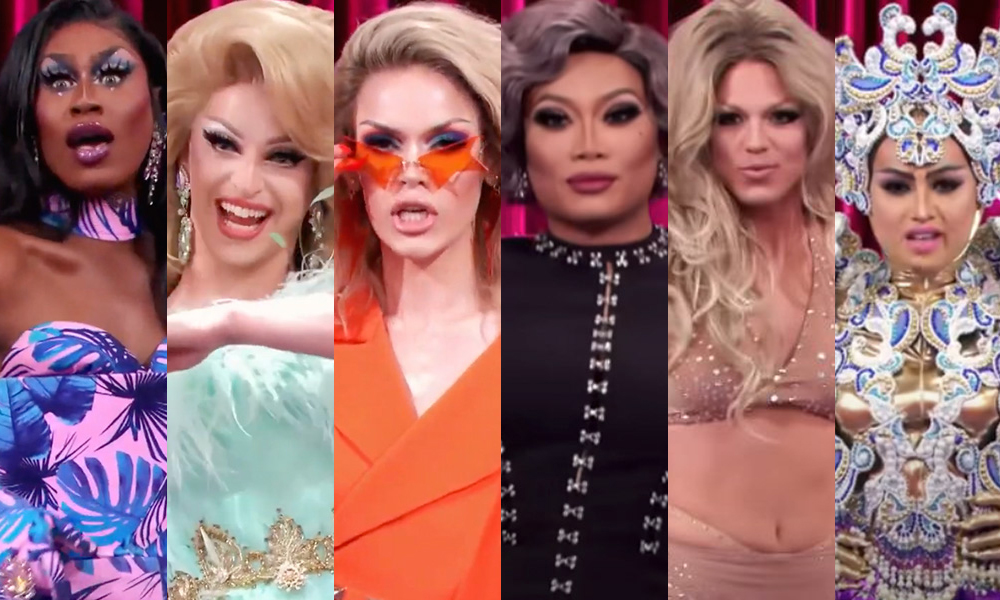 Welcome to the Ru-mocracy queens…

We’ve had a little bit of a break from All Stars since the last season where we saw Monét X Change, and Trinity the Tuck both winning a spot in the Hall of Fame. But we’re back with a whole new group of beloved queens from seasons past, and it’s time to see who the next inductee into the world famous Drag Hall of Fame will be. The episode starts with a reminder that Ru is a fan of switching things up, mainly how the all-star queens will be eliminated each week. You’ll remember that previously the top two queens each week would “lip sync for their LEGACY” and the chance to eliminate another queen. As always, it’s Ru’s world, and we’re all just living in it. Therefor the announcement that eliminations will go a little differently this time around is not a big surprise.

First in the werk room is Miss Shea Couleé, who is looking stunning in a matching co-ordinating set (you should know that I am bias towards matching sets). You’ll remember that Shea lost her chance at the season 9 crown after Sasha Velour did her now iconic rose petal reveal at the finale. Next in the werk room is season 10’s Miz Cracker, who most remember as the pickle queen. She was a favourite of mine in her season, and I can’t wait to see what she does on her All Stars journey. The next queen in the werk room is Alexis Mateo from Season 3, and All Stars 1. Alexis is not only an incredibly well-rounded queen, but she’s Vanjie’s mom so big big respect. Blair St Clair is back in the werk room, and she has finally gone through puberty, and looking absolutely sickening. Although her orange blazer dress is stunning, her most shocking accessory is her confidence (which Alexis things is leaning on the side of arrogance), will this make or break her All Stars journey? Next up Mariah Paris Balenciaga enters the werk room looking like a whole damn superhero. Season three’s Mariah is back, so prepare to gag on her eleganza queens. Also making a comeback from season three is India Ferrah. Hopefully none of the other queens pick her up during any lip syncs this season. Next up, Jujubee from season two and All Stars 1. Jujubee has made top three TWICE, and she is ready to finally take the crown. She’s a fan favourite, so she might just do it. Next in? It’s Derrick bitch. Derrick was so focused on being the world’s best Britney impersonator on her season, and she’s apparently not letting that get to her this time around (in a full Britney outfit, and Britney sweater in confessionals) cue rattlesnake sound effect. Derrick is excited to be here, but she’s especially NOT excited about having to be in the same room as India. Not even 10 minutes into the episode and there’s already tea (cue rattlesnake sound effect again). Mayhem Miller is here to break the tension though. Mayhem says she didn’t push herself enough in season 10, and she’s ready to not hold back. Last in the werk room is season 1 queen Ongina. She was one of the queens that started it all, so have some respect! It’s been 10 years since we’ve seen Ongina, and mama looks SICKENING. I’m so happy that she’s here.

For a lot of queens this is a shot at redemption, and they are not letting it slip away. Ru enters the room, and explains that this season we’re doing things a little differently. This time around, we’re not only giving the top two queens of the week the power to send queens home. This season we’re voting queens off SURVIVOR STYLE BABY. Because this is WHAT? A Ru-mocracy, and everybody’s voting. It’s time for the queens to compete in their first mini challenge of the season, and the library is open. When Ru calls for the pit crew, the only person to enter the room is none other than Ricky Martin. Much like myself, Alexis is losing her mind, probably because Ricky looks the same as he did in 1999. I guess good things do still happen to some people. Just like that the library is open and the reading is exceptionally good today. Derrick and India have some words for each other, and poor Ongina sounds like she’s never had to read a queen in her life. The winners of the mini challenge are Jujubee, and Blair St Clair.

This week’s maxi challenge is no surprise if you’ve watched a season of All Stars before. Of course it’s a variety show challenge. Each queen will perform their own act. As the queens get out of drag the tea between India and Derrick comes to light. And surely as more queens know that there’s beef, the more we are finding out about this feud. It doesn’t take long for shit to hit the werk room fan. As much as I would love to sit here and watch more of this story unfold, we have a whole variety show to get through. Out on the judges panel is of course staples Michelle, Carson, Ross, Ru, and this week’s guest judge Ricky Martin. 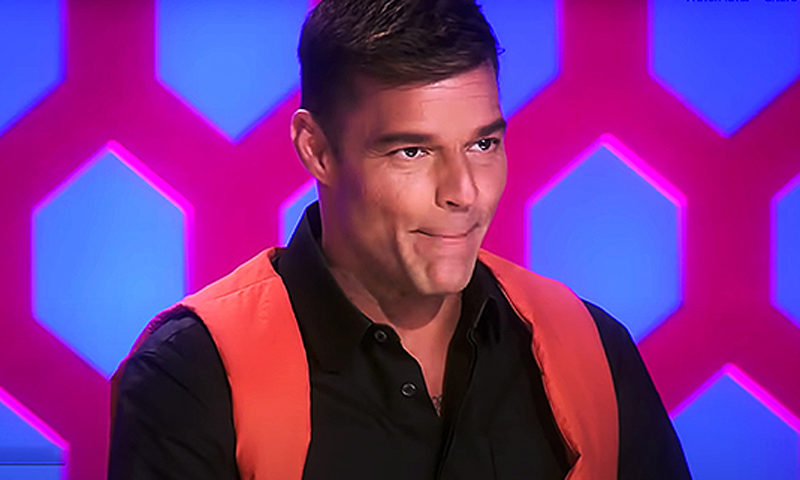 First up in the variety show is Alexis Mateo who is for sure getting bonus points from Ricky with her Spanish showgirl number. Next up is Shea, who is performing what I can only describe as lyrical pole dancing, werk. Mayhem Miller who performs original song/slam poetry. Nobody is sure. Mariah chooses to perform a powerful spoken word piece that has Ru gasping for air. Cracker is up next and puts some classic Cracker pep back onto the stage. Blair gives us full pop star with her dance ballad performance, and Ongina wows in a series of outfit reveals. Derrick’s 1000 impersonations in 10 seconds was a big flop. Sorry. It’s ok because Jujubee is here to save it with her passionate power ballad. As far as the singing goes, she’s the best on this cast vocally. India’s routine is last, and it was all about telling her fellow queens that drag is not a contact sport. Honestly, it was everything, but I got a concussion watching her routine. Girl, are you ok?

Following the variety show, it’s time for Ru to tell us what is going on with the eliminations this season. Basically there will only be one top queen a week. She will pick a lipstick, and the rest of the queens will vote for who they believe should go home. However, the top queen will still lip sync for her legacy against a secret lip sync assassin each week. If the top queen wins the lip sync, the queen she chose on the lip sync will go home. If the lip sync assassin wins, the group vote will go home. Ru announces that Shea, Blair, Mariah, and Jujubee are all safe this week. It’s time for critiques. The judges all love Miz Cracker, and Alexa’s performances. They praised India’s return to drag, and her performance this night. Derrick’s act was not received well. Once again, Derrick was read for relying on impersonating celebrities in a time when she should be showing us what Derrick is all about. The judges agree that they couldn’t really understand Mayhem’s lyrics. The judges say that Ongina’s performance was cute, but didn’t really go anywhere, and I have to agree. Ru decides that India is the first top all-star of the week. Derrick, and Mayhem are the bottom two of the week, meaning the safe queens decide which of the two are going home this week.

Backstage the queens decide that they all need to talk to each other to make their decisions. The conversation between India and Derrick is surprisingly calm and civilized. However, her conversation with the voting queens goes a little differently. They tell her she’s once again relying on Britney, and they’re not lying. Mayhem’s conversation with India is filled with a little more passion, and an alliance is presented. However, I don’t know if India will want to get rid of Derrick right away? Or keep her around to battle it out a little longer? As the voting queens drop their lipsticks in the box, and India picks hers, it’s time to find out who this week’s lip sync assassin. India will be battling for her legacy against season 11 winner Yvie Oddly. 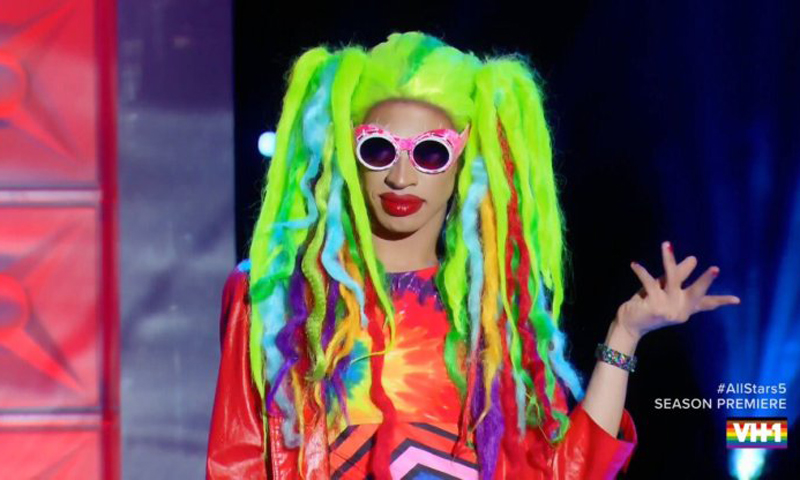 The two lip sync to “Livin La Vida Loca” by Ricky Martin obviously. These two queens are PERFORMING. Between the drops, slides, and reveals it could be either queen’s game. Ru decides that the winner of the lip sync is Yvie Oddly. This means that the $10,000 cash tip will roll over into next week’s prize. The game just keeps getting more interesting. Yvie reveals that the queen that the group has chosen to get the chop is Derrick Barry. Although Derrick’s journey as an all-star is over, she remains a superstar. It’s been an eventful week! I’m going to go listen to Britney’s greatest hits. Byeeeee!

What we’ll see next week: The queens write their own verses for a song, potential tea between Blair and Miz Cracker, and another lip sync assassin will reveal themselves.