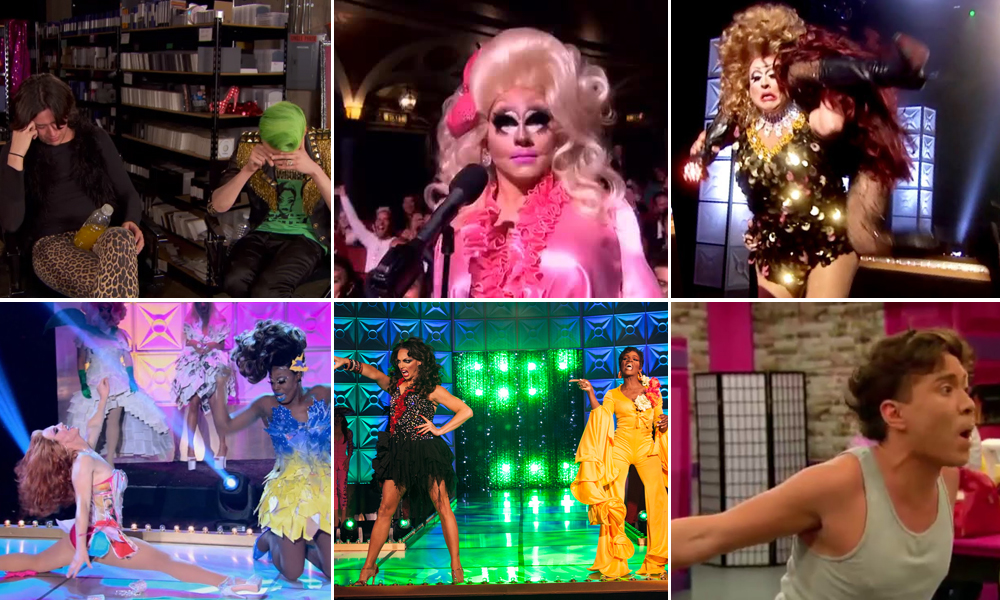 Go back to Party City where you belong…

No Tea, no shade, no pink lemonade, but I think we can all agree that Drag Race wouldn’t be nearly as exciting, or iconic if it weren’t for all the tea being spilled. Feuds aren’t something we’re treated to every season, but when we are we’re given weeks, and weeks of iconic television. Some feuds are born on the show, and some have deep roots that have started before the queens ever step into the werk room. Judies will come and go, but feuds, feuds are forever. Here are some of the most memorable feuds and Drag Race herstory.

Laganja and Adore
Laganja and Adore spent most of Season 6 as best friends, but when Laganja started getting read for not being genuine, she felt that Adore should have stood up for her. Adore, never one for uncomfortable confrontation (remember her self-elimination in AS2?) This resulted in more than a few arguments backstage on I that eventually ended the friendship when Laganja was sent packing. The two recorded a very uncomfortable “make up” video for the reunion that obviously ended in tears, and we’re still unsure if these two are friends or not.

Acid Betty and Trixie Mattel
This feud is special, and different from the rest on this list because Acid Betty and Trixie didn’t compete on the same season, and the extent of their feud only lasted a couple of seconds during a finale, also it was mostly one-sided. It all started when Acid Betty made a remark about Trixie in an Untucked episode. During the Season 8 finale, while the queens were taking questions from the audience, Trixie stepped up to the microphone to offer Betty the chance to fight her in the parking lot after the taping. Trixie’s half joking tone, mixed with the sheer look of horror on Betty’s face was enough to make any Drag Race fan feel uncomfortable. This may have been a tiny feud in the Drag Race universe, but it had a lasting impression.

Mimi Imfurst and India Ferrah
Whether you’re a diehard Drag Race fan who’s been watching from the beginning, or you’re new to the show, you have likely heard the phrase “drag is not a contact sport” at least once on the show. We mostly have Mimi and India to thank for that. During a Season 3 lip sync these two became involved in a physical altercation (I know, I still can’t believe this tom foolery either) when in a bid to stay in the spotlight, Mimi picked up India and threw her over her shoulders. The whole thing is a huge cringe-fest to watch. India continuously screams “Get her off of me”, while the camera flashes back to Ru, who is blissfully still head bopping to Don’t Leave me This Way. Its moments like this that made Drag Race the show we all know and love. Lip Syncs are hard, but by all means, please keep your hands, and acrylic nails to yourself.

Bob the Drag Queen and Derrick Barry
This feud may be a bit more fresh in our minds than the others, and although it was the least explosive on this list, it certainly get points for being the most passive-aggressive. It all started with Derrick being annoyed with Bob’s over-the-top personality. Bob, being Bob, took it a step further and started doing and saying things to deliberately annoy Derrick through the season. The two had a few fights in the werk room, but ended up making nice before the end of the season. At some point we’ve all been a Derrick, and we’ve also been a Bob. So yes, this feud wasn’t the juiciest in Drag Race herstory, but it might be the most relatable, and that’s why it’s on the list.

Coco Montrese and Alyssa Edwards
This was a feud that started way before the cameras started rolling on Season 5. Coco and Alyssa went way back. First they were good friends, and after Alyssa got dethroned following a pageant, and Coco was crowned instead. Thus started the war that would be remembered forever. Alyssa’s face when Coco walked into the werk room will forever be etched into my brain, along with the sound effect, and aggressive zooming. After the two shared some heated exchanges, they eventually made up and were friends again when them competed against each other in All Stars 2. But who could ever forget the iconic “Girl! Look how ORANGE you look girl!” Coco and Alyssa’s feud will forever be legendary, and frequently quoted among groups of friends doing their makeup before a night out.

Sharon Needles and Phi Phi O’Hara
This was a feud so powerful, that not even I could look past the fight to appreciate each of the queens individually. But I simply cannot, and will not ever get over the fight that transpired in the werk room during the season 4 episode that shook the drag world. Sharon, the resident, and undefeated reining queen of spook, was blasted by Phi Phi O’Hara after Sharon suggested Phi Phi was a “tired ass showgirl”, to which Phi Phi responded by telling Sharon to “go back to Party City where you belong”. Not only did Sharon’s drag stand out more than Phi Phi’s but she was also way more likeable. Sure, Phi Phi was so young during her first appearance on the show, but when she came back to All Stars and played the exact same game, she was cancelled in my book. Just for the record, I love all things spooky, and Party City, so I will always be #TeamSharon.

Sure, we don’t wish to see any of our favourite queens fighting, but we’re also not going to deny that these feuds have been some of the most iconic, and memorable moments in all of Drag Race herstory. They get better, and better with age because everybody loves a good feud, and that’s just the tea kitty girls.