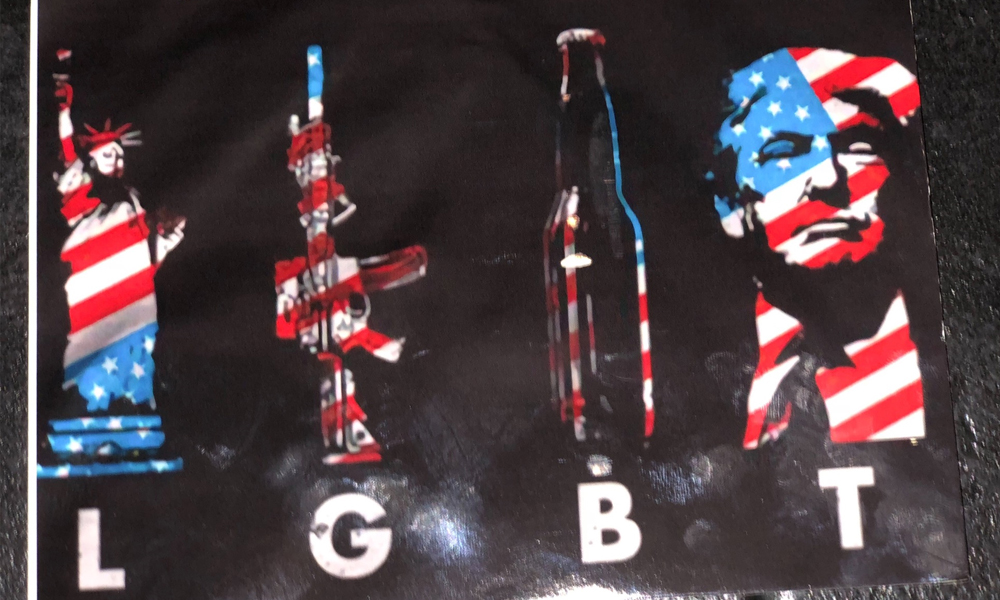 At least four gay bars in Nashville, Tennessee reported receiving flyers containing images, which can only be interpreted as ‘hate mail.’

The pamphlets have the letters ‘LGBT’ written in bold, white letters, with images of the Statue of Liberty (L), a beer bottle (B), a gun (G) and President Donald Trump (T); all tinted with the colours of the American flag. All the pamphlets were marked with a ‘MAGA’ stamp on the back, which makes a direct reference to the POTUS’ slogan “Make America Great Again.”

The image of the assault rifle is particularly disturbing as it seems to resemble the weapon used in the 2016 Pulse nightclub shooting in Orlando, Florida.

Melvin Brown, the owner of Stirrup Sports Bar, states that he found the flyer in the mailbox on Thursday, and feels the images are sending a deliberate threat. In an interview with NBC news, he said:

“To see somebody send a postcard that had a picture of the weapon used in one of the deadliest assaults in this nation’s history, and one that happened at an LGBTQ bar, and to send that image to LGBTQ bars, to me is not a coincidence.”

All of the pamphlets had a return address tracing back to an empty parking lot in downtown Nashville.

Chris Sanders, the executive director of the LGBT group Tennessee Equality Project, said he feels the targeted locations may also have been selected due to the up-coming midterm elections on November 6. He mentions that some of the bars have previously held voter registration drives.

Despite the potentially political message of the flyers, Sanders states that the images are certainly threatening and aggressive. He mentions that although the community is shocked, they will still vote in a few weeks.

While the police are not currently investigating the act, the Metropolitan Nashville Police Department will have an increased presence in the area.

Clothing company, American As F*CK, told Metro Weekly that the images used were originally from the brand. Their CEO, Shawn Wylde, said the images are intended to be funny and hopes the images were not used for ‘hateful intent.’

“I have always supported traditional marriage. Despite this decision, no one can overrule the truth about what marriage actually is; a sacred institution between a man and a woman.”