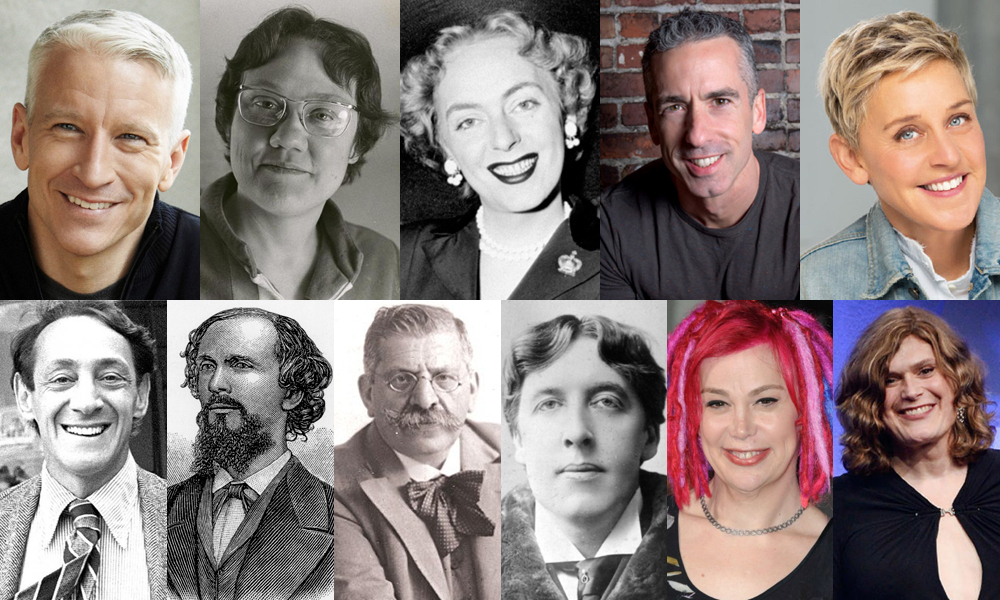 “Changing the world” is no easy feat. It means connecting with people in a way that few of us are capable of, and doing it on an enormous scale. These days, social media makes “going viral” seem like a piece of cake, but that’s because people can share their opinion with a click. A cause can spread across the country—and the world—like wild re thanks to hashtags, vloggers with millions of followers, and a 24/7 news
cycle that never sleeps.

There has been a lot of change for the LGBT community in the past couple of decades, and social media has undoubtedly been a huge part of that. More people are able to share their stories, start conversations, and demand more from the world. As acceptance grows, it’s important to remember some of the iconic LGBT people who have done so much for not only their community, but also the world as a whole.

Here are just a few of the LGBT individuals who have made history for their contributions.

ANDERSON COOPER
Anderson Cooper is probably the most prominent openly gay journalist and anchor in American television today, with his show Anderson Cooper 360° airing on CNN since 2008. It wasn’t until 2012 that he came out as gay, saying, “It’s become clear to me that by remaining silent on certain aspects of my personal life for so long, I have given some the mistaken impression that I am trying to hide something—something that makes me uncomfortable, ashamed or even afraid. This is distressing because it is simply not true…. The fact is, I’m gay, always have been, always will be, and I couldn’t be any more happy, comfortable with myself, and proud.” In 2013, Cooper was awarded the GLAAD Vito Russo Award, which is presented to an openly LGBT media professional who has made a significant difference in promoting equality for the LGBT community.

BARBARA GITTINGS
Barbara Gittings was a prominent American activist for LGBT equality from the 1950s until her death in 2007. She brought attention to a wide range of different causes that affected the LGBT community, from picketing against the US government’s ban on the employment of gay people to ghting to get the American Psychiatric Association to drop homosexuality as a mental illness. Because of her devotion to promoting positive literature about homosexuality in libraries, the American Library Association created the Barbara Gittings Award, an annual award for the best gay or lesbian novel. As well, GLAAD named an activist award after her.

CHRISTINE JORGENSEN
Although she wasn’t the first in the world, Christine Jorgensen was the first person in the US to become widely known for having sex reassignment surgery. After serving in the US Army during World War II, she heard about sex reassignment surgery and travelled to Europe to seek out the operations for herself. Her transition was the subject of a New York Daily News feature story, and she used her newfound platform to become an advocate for transgender people. Her openness helped bring attention to gender identity, and influenced other transgender people to change their names and the sex on their birth certificates. She sparked the notion that gender was not a set binary and inspired more discussion around gender norms.

DAN SAVAGE
Dan Savage started writing his relationship and sex advice column “Savage Love” in 1991 as a way to provide mocking advice to heterosexuals, because he said straight columnists were “clueless” when it came to responding to letters from gay people. The column, along with his podcast, Savage Lovecast, made him a household name—and he has used his platform to bring different types of love, sex and relationships into the spotlight, shut down stereotypes and fight for LGBT rights. In 2010, Savage and his husband, Terry Miller, started the It Gets Better Project, a non-profit that aims to prevent suicide in bullied LGBT teens by letting them know that things will get better. Savage always encourages his readers and listeners to get involved in any way they can.

ELLEN DEGENERES
After working as a stand-up comic for years, Ellen DeGeneres starred in two popular sitcoms: Ellen from 1994 to 1998 and The Ellen Show from 2001 to 2002. It was during the fourth season of Ellen in 1997 that she (and her character) came out as a lesbian, making her the first openly lesbian actress to play an openly lesbian character on TV. The show went on to explore a number of LGBT issues including the process of coming out, which was something no other sitcom had ever done. DeGeneres has been hosting her daytime talk show, The Ellen DeGeneres Show, since 2003; as well, she has her own music label and production company, has won 30 Emmys and 20 People’s Choice Awards, and received the Presidential Medal of Freedom in 2016 for her contributions to shaping television and the media today.

HARVEY MILK
As the first openly gay elected official in the history of California, Harvey Milk made history when he was elected to the San Francisco Board of Supervisors as a city supervisor in 1978. His speeches were high energy and amboyant, which attracted a lot of media attention and support from San Francisco’s gay community. Milk served as a city official for only 11 months before he was assassinated, along with the mayor of San Francisco, by a former co-worker. He has since been called “the most famous and most significantly open LGBT official ever elected in the United States” and was posthumously awarded the Presidential Medal of Freedom in 2009.

KARL HEINRICH ULRICHS
German writer Karl Heinrich Ulrichs grew up in the mid-1800s preferring to wear dresses and feeling like he’d much rather be a girl. In 1862, when he was 37, he told his family and friends that he was an “urning,” which he described as “a female psyche in a male body who is sexually attracted to men.” He began writing under a pseudonym, coining a number of terms to describe different sexual orientations. He eventually started using his real name, which is considered to be the first public “coming out” in modern society. Ulrichs was also the first homosexual to speak out against anti-homosexual laws. He is now considered an icon and pioneer, even being called the “first gay man in world history.”

MAGNUS HIRSCHFELD
A physician and sexologist from Germany, Magnus Hirschfeld was also an outspoken advocate for sexual minorities. He founded the Scientific Humanitarian Committee, which has since been credited with having carried out the “first advocacy for homosexual and transgender rights.” His 1914 book The Homosexuality of Men and Women attempted to prove that homosexuality existed all over the world regardless of culture and upbringing. Hirschfeld, who was gay himself, believed that proving the existence of gay high-ranking of cials would help legitimize homosexuality. He even testified in a high-profile trial that “homosexuality was part of the plan of nature and creation just like normal love.” During a tour of the US in 1931, Hirschfeld developed a system where he categorized 64 possible types of sexual orientations, which today might be similar to what we consider the “spectrum.”

OSCAR WILDE
An Irish poet and playwright, Oscar Wilde is known for his play The Importance of Being Earnest, for his novel The Picture of Dorian Gray—and for the persecution he faced for being gay. In 1895, Wilde sued the father of his lover for libel, but the lawsuit back red on him and he ended up being charged with “gross indecency”—or homosexuality— and was sentenced to two years’ hard labour. During his trial and in his writing, Wilde eloquently defended his right to his sexuality. He believed in the right to be yourself, writing, “To regret one’s own experiences is to arrest one’s own development. To deny one’s own experiences is to put a lie into the lips of one’s own life. It is no less than a denial of the soul.”

LANA AND LILLY WACHOWSKI
Originally known as the Wachowski brothers (Larry and Andy), Lana and Lilly are a directing, writing and producing team for movies such as The Matrix Trilogy, V for Vendetta and Cloud Atlas, as well as the Netflix series Sense8. In early 2000 it was reported that Larry was transgender and beginning her transition, and by 2010 she was no longer Larry, but Lana. At the time, she was the first major Hollywood director to come out as transgender. She received the Human Rights Campaign’s Visibility Award in 2012 and said: “I am here because when I was young, I wanted very badly to be a writer, I wanted to be a filmmaker, but I couldn’t find anyone like me in the world, and it felt like my dreams were foreclosed simply because my gender was less typical than others. If I can be that person for someone else, then the sacrifice of my private civic life may have value.” In 2016, Lana’s brother Andy also came out as a transgender woman and is now named Lilly.

I’m sorry to say this , but the article name is too exaggerated don’t you think (article writer) ?!
See the article headline is (LGBT people that CHANGED THE WORLD ) !!!
Like wow , i though i would enter this article an drew read about doctors that cured diseases, scientists that spent their whole life trying to fix world issues , people like Einstein , Gandhi , nelson mandela …ETC
But no , all what i see are succeed LGBT people , and LGBT people that defeanded the LGBT community and helped them (not the whole world, because a lot of people don’t give a shit really) .
They are successful people , good for them , and for me and the rest of the world ?

Moral of the comment : Dont exaggerate headlines to get more clicks .