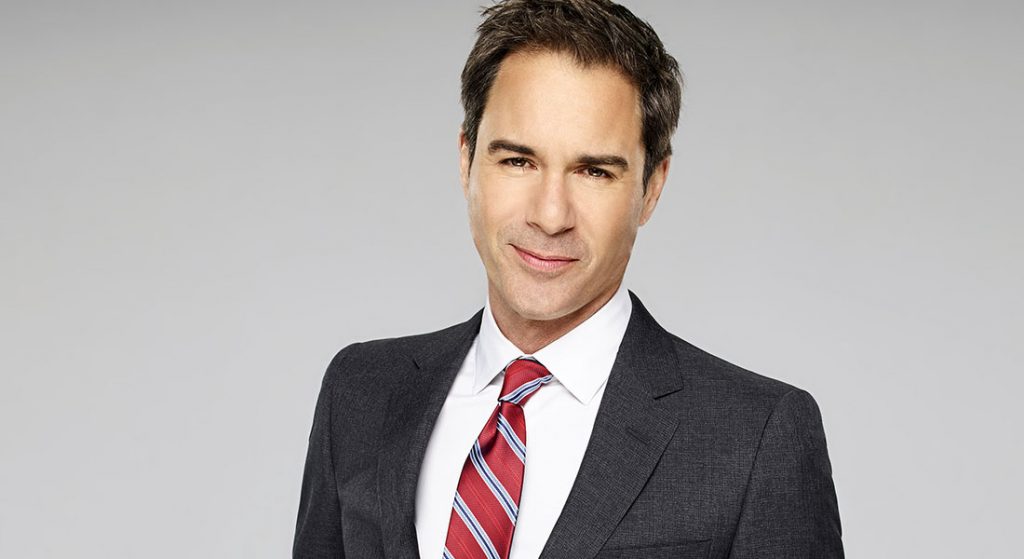 Will & Grace is returning to tackle social media, sexuality and politics—and no one’s happier than Eric McCormack
By Nelson Branco

“Honey… What is this? What’s going on? What’s happening?”
– Karen Walker in almost every scene in Will & Grace

Just like everything else in the world, you can blame Hillary Clinton.

If the former US first lady, senator and secretary of state hadn’t been in danger of losing the coveted presidency of the United States last year, our favourite gays and their kooky queen magnets wouldn’t be returning to reclaim what is rightfully theirs on TV this fall.

As most know, the much-missed and adored Will & Grace is making a very big gay comeback, which was inspired after the Emmywinning team reunited for a get-out-the-vote video last September. With nearly eight million views at press time, the hilarious and topical 10-minute vignette reunited the dysfunctional but lovable Will Truman, Grace Adler, Jack McFarland and Karen Walker.

It was surreal yet comforting to see our beloved old friends tackle modern hot topics. It was akin to seeing Carrie Bradshaw and company in a Sex and the City movie—except Will & Grace’s writing didn’t suck!

Enter NBC, a network that is staging a comeback of sorts lately after a decade of failures. It was immediately inspired to reboot Max Mutchnick and David Kohan’s Emmy-winning and groundbreaking sitcom, which aired between the impressionable years of 1998 to 2006, when TV was just beginning a renaissance by becoming more sophisticated and diverse. In fact, expectations are so high that NBC increased its 10-episode order to 12 shows, and then 16 shows following the outpouring of support for the continuation.

And that’s because, if there was ever a time we needed Will, Grace, Jack and Karen, it’s now.

So much has changed since the show went off the air 11 years ago: same-sex marriage is now federally legal south of the border (for now); transgender rights have been embraced by the majority; and Barack Obama became the first black US president.

However, the world isn’t all rainbows and unicorns: it’s currently in danger of being dismantled by myriad power structures and dictators due to a fear of globalization and terrorism. Add the mercurial impact of climate change, technology, AI and smartphones (just imagine Jack on Grindr!), and no one is worried lightning won’t strike twice with Will & Grace 2.0.

But Will & Grace was much more than a Greek chorus for the gay community. (How much do you miss the ’90s right about now?!)

If it weren’t for the quirky yet trailblazing LOL-funny situational comedy, there wouldn’t have been a Queer As Folk, The L Word or Looking. Nor the LGBTQ+ diversity we see in almost every narrative and medium today.

But it wasn’t a bona fide hit out of the gate. Debra Messing reminded E! recently that the cast is still surprised the original series even lasted past the first season. The Emmy winner said, “When we filmed the pilot, we knew that it was risky. But we all looked around and said, ‘We could be cancelled after three episodes…[because] America may not be ready for this show. As you know, Ellen DeGeneres’ [titular sitcom] had just gone off the air. We just didn’t know.”

Will & Grace producers were also slammed during the first season for not making Will “gay enough” and eschewing homosexual romantic situations.

But that all soon changed, and Will & Grace became untouchable and a cultural phenomenon. Having scored 16 Emmys and 83 nominations during its run, the show has been called the most successful network series featuring leading gay characters and one of the top 10 best NBC sitcoms ever, and it has been inducted into the National Museum of American History.

Will & Grace was such a vanguard for the industry that, during an interview with Meet the Press, former US vice-president Joe Biden said, “I think Will & Grace did more to educate the American public than almost anything anybody has ever done. People fear that which is different. Now they’re beginning to understand.” Biden added he was “absolutely comfortable” with same-sex marriage, which prompted then President Barack Obama to echo his sentiments.

Will & Grace was the catalyst for a lot of the strides the LGBTQ+ community made. And that’s not going to change for the Justice League of sitcoms. Messing tells expectant viewers to expect the same W&G but with modern storylines and situations. 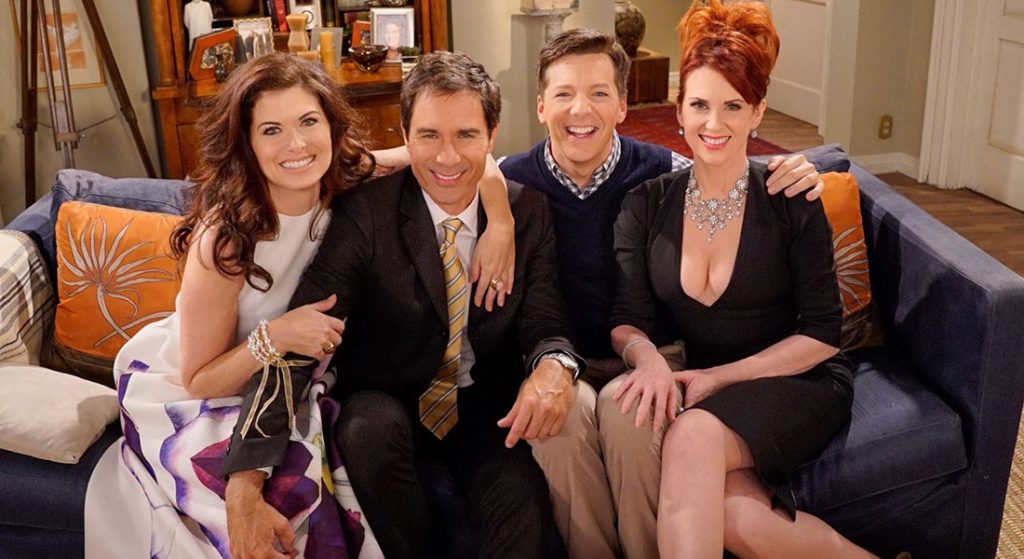 In an interview with E.T. Canada, she promised, “It’s gonna be truthful. In every episode, we’re gonna be addressing what’s happening in real time. Always our number one priority is to make people laugh, but there’s lots of comedy to be mined from the chaos that’s happening in our world. There’s also an opportunity to now celebrate all the other initials of LGBTQ. We know that [the writers are] coming up with a very quick and clever way of addressing the time that’s past. I have heard some storylines and I’m just very excited. It’s not going to disappoint.”

IN spoke with 54-year-old Emmy winner Eric McCormack—who is pulling double duty as he also stars on Showcase’s Travelers, which tapes in Vancouver—about reprising his iconic role.

I began rewatching Will & Grace out of the blue earlier this spring, before NBC’s announcement, and I can’t believe, in hindsight, how groundbreaking the show was—its humour, sex references, subtext and stories. Will the continuation of Will & Grace still boast that courageous cheeky wink to the audience despite the fact that nothing is sacred anymore?!
On a sexual level, I said to Max, our producer, I hope we’re not going to be stifled in any way. We have to be as much as Will & Grace as we were—if not more. I mean, I made out with Taye Diggs at 9 pm on a Thursday night on network TV. Over a decade later, we can’t back away from that. We can only go forward. Luckily, everyone at NBC agrees that the show has to be more Will & Grace than it ever was. So, on a sexual, political and cultural level, we’ll continue to push the envelope.

Was the US election video that reunited the cast an attempt to gauge viewer interest regarding a reboot? Or was this all a happy accident?
It certainly wasn’t my intent. But I think it was Max’s. I think he knew if we did these videos right, it could easily result in a season pickup for us. We had access to the sets—which still existed—and we wanted to help Hillary Clinton’s campaign. But, for me, I never thought Will & Grace would go beyond that. It was exciting to see the response. I never thought it would turn into this. And it happened so quickly, right after the September debates. Within a week, there were Will & Grace reboot rumours. Meanwhile, I had finished shooting Travelers and was waiting for that to air, so I wasn’t even in the mindset of Will & Grace returning to TV. It took a bit of time to figure all the logistics out, but we got the two shows to work together. 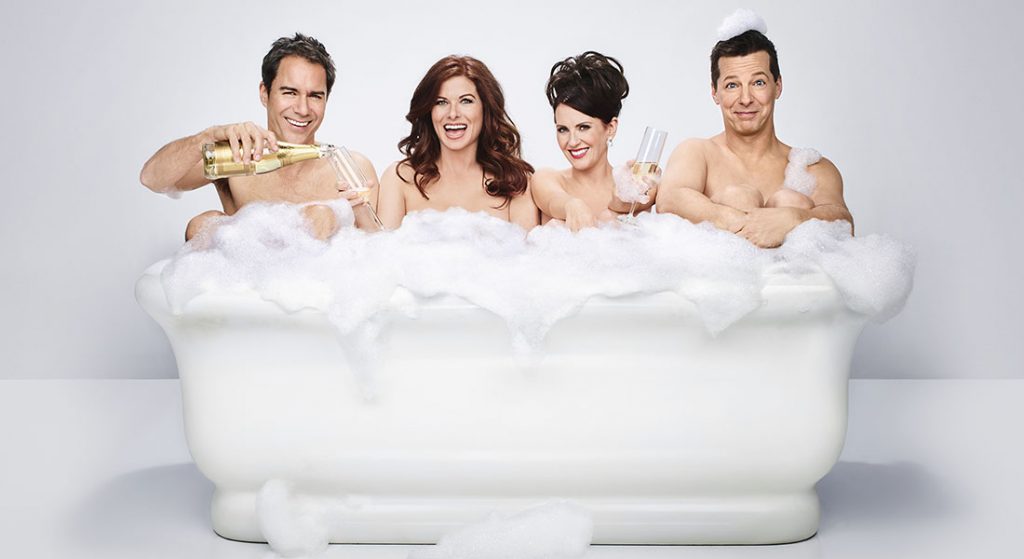 Was there anyone on the cast who was hesitant to do this? We’re always hearing about the few actors from Friends who never want to reprise their iconic roles for a variety of reasons.
It was an easy decision. And it’s not because we would meet up at our own Central Perk week after week. We had seen a lot of each other, but all of us went on with our careers and tackled other roles. Debra Messing’s had other shows (Smash and The Mysteries of Laura), and so have Megan and Sean.

Resurrecting Will & Grace wasn’t born of any need, you know? It was born out of love. If we do this right and don’t hurt the show, nor its memory and legacy of this beloved series…I think it’ll be a success. And that’s because we all loved the way the series ended. You remember, we were all sent into the future and Will’s and Grace’s kids fell in love. We realized we don’t have to be defined by the series finale. We can just put Will and Grace back into that apartment and tackle modern life. I don’t think the audience needs an explanation to the finale. Will, Grace, Jack and Karen just need to exist.

So we should thank US President Trump for ‘Just Jack!’ coming back to our screens?!
If Hillary were elected, I don’t think Will & Grace would need to exist again. Yes, we would be fun to be around. I think right now we need these characters to say what they say. And I include Karen in that. There’s always a debate Karen can tackle in a funny way. That tone of discourse is important.

You must be proud of how Will & Grace’s legacy impacted the human freedoms we enjoy today—especially in Canada.
Between [former US vice-president Joe] Biden and Obama, they flew that rainbow flag with pride. They did incredible things: they took our sitcom fire and brought it to the mainstream and put it in context. And it’s so pressing right now because, in a few months, we could be put back so far with Trump. Certainly, during the ’00s, we were all surprised how Joe Biden put it, but we couldn’t deny that we always had an agenda with Will & Grace to slowly and surely normalize things for the average American that they weren’t used to. I get younger guys, like 18 years old, telling me, ‘I came out to my parents because of Will & Grace.’ I’m like, ‘What? You’re 18!’ They’ve been watching the reruns. The show continues to have a voice for gay men and women for all generations.

Even more so now that it’s coming back to TV. What are your thoughts on Pride in general since you’re a part of our gay history?
Anything that is positive is good now. Especially now because we’re living in a very cynical and negative time. Pride came out of wanting to be heard and accepted but now it’s a celebration that must continue. Pride encompasses more than ‘we’re here, we’re queer—get used to it.’ It’s more about celebrating the lives gay men and women have created with children and everyone else in their lives.

Will & Grace premieres Thursday, September 28 at 9 pm ET/PT on Global.

NELSON BRANCO is the editor of 24 Hours Toronto newspaper. As a contributing editor, he’s penned pieces for magazines like Hello Canada, People and TV Guide, and online sites like Huffington Post. He’s also worked as a TV producer for Breakfast TV, The Marilyn Denis Show, CTV News and the Sun News Network. You can follow him at @nelliebranco.