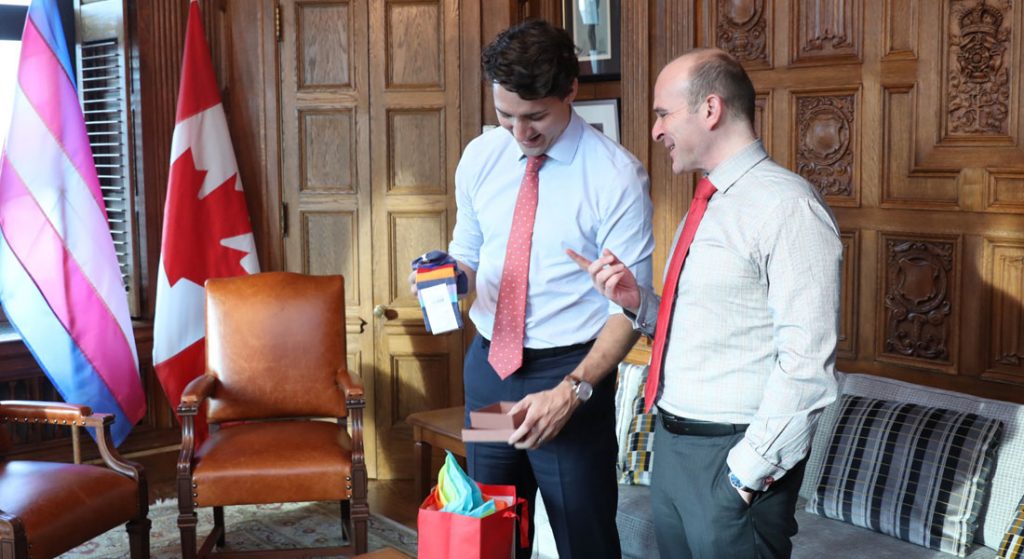 CANADA'S NEW LGBTQ2 SPECIAL ADVISOR IS ON THE MOVE

Edmonton Centre MP Randy Boissonnault has a plan—and, like the country, it’s broad, far-reaching and ambitious

When you speak with Randy Boissonnault, Canada’s new LGBTQ2 Special Advisor to the federal Liberal government, the first thing you notice is that he’s very enthusiastic. He speaks quickly, as if he’s afraid he’ll run out of time to tell you about his plans. That’s good, because he has a lot he wants to accomplish in the next three years.

Boissonnault represents Edmonton Centre as a Liberal member of the House of Commons. He is one of six openly gay MPs who serve in the current Parliament, and has been in the Special Advisor role since November 2016.

“I continue to be honoured and humbled by the appointment,” he says when asked how he felt when named to the post by Prime Minister Justin Trudeau. He says the appointment was a surprise and he was “speechless on the phone with the Prime Minister,” but he’s been busy since then reaching out to organizations and communities across the country to hear their concerns.

That’s a pretty full plate, but there’s more. When assigned this piece, I reached out to friends who might be affected by the government’s decisions, and asked them what they wanted me to ask Boissonnault. It’s a long list.

Transgender rights
While Canada is moving in the right direction with trans rights, transgender people still have problems when it comes to identification when travelling. Bill C-16, which would amend the Canadian Human Rights Act to add gender identity and gender expression to the list of prohibited grounds of discrimination, is now with the Senate. “We’re waiting to see how and when the Senate is going to be able to come to a vote on that,” Boissonnault says.

Increase in homo- and transphobia
Boissonnault says part of his new role is to learn from other countries with good LGBTQ2 records. “[Canada is] sharing human rights around the world but we’re not leaders in this space.” He says Germany, Austria and Australia are doing good work, and we should listen to them.

Countries with poor LGBTQ2 records
Boissonnault says the Liberal government stands up for human rights and the Canadian values of pluralism. “That’s why we’re re-engaging with the world, so we can champion those values. Trade is one of the best ways to open a dialogue and share those values. It does change hearts and minds over time.” He hopes to use Canada’s soft power (everyone loves us!) to influence trading partners and change minds. This includes working closely with the Minister of Immigration, Citizenship and Refugees as well as the Global Affairs team.

Blood donation
Boissonnault is oblique on the whole topic of the current blood donation deferral period (one year for gay men who are abstinent, reduced from five years). “We ran on five to zero, we’re at one, we’re not done, I’m not happy,” he says. But “some things in government are third-party,” he adds. “You can’t send out edicts, so we’re working with our colleagues in the Canadian Blood Services and Héma-Québec. We’re going to keep pushing and follow the science.”

In 2017, Boissonnault will be sharing his road map with communities, individuals and organizations. He also plans to reach out to Canadians—those in the LGBTQ2community and allies—who are already asking how they can help. He plans on using technology and engagement approaches to help people understand the issues in a way that’s going to stick with people and help them see why LGBTQ2 concerns matter. “I came into politics to help. I’m not going to have a basket of announcements to make. When we deliver on something, we announce it.”

RENÉE SYLVESTRE-WILLIAMS is a Toronto-based journalist. She has been published in Forbes, Canadian Living and The Globe and Mail.