Home / Life  / Behind The Spotlight
Life 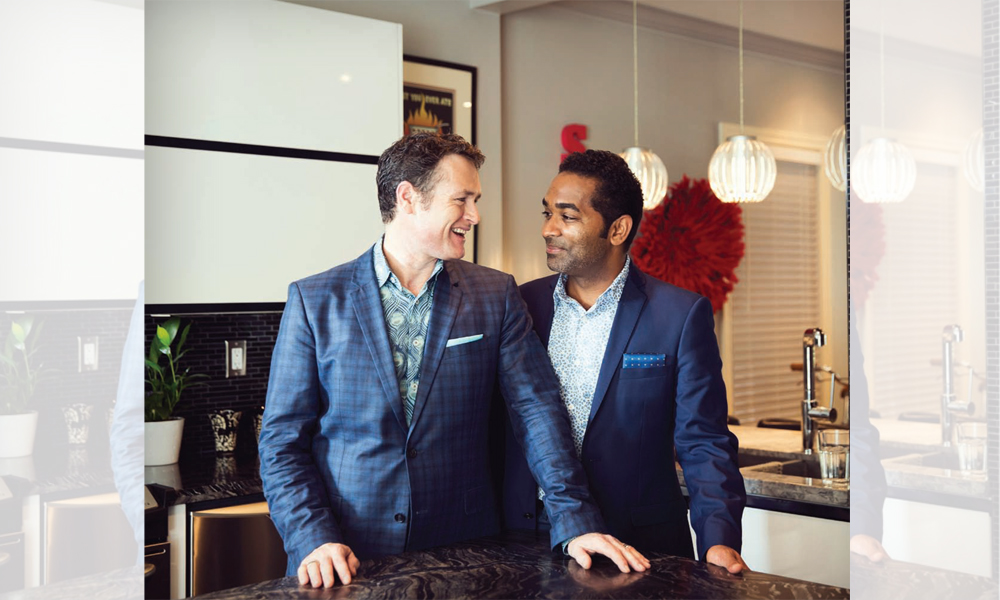 The name Glen Peloso might not be recognizable, but his face is everywhere. Whether on CTV’s Marilyn Denis Show or in reruns in 82 countries on Restaurant Makeover, or as a columnist in myriad magazines and newspapers too numerous to mention, the interior designer has spent the better part of 20 years bringing beauty and purpose to living spaces. Chances are your neighbour has a new bathroom or kitchen by Glen Peloso Interiors. But when it comes to his own Riverdale home, which he shares with his partner Sheldon Mahabir, he’s as down to earth and low-key as they come. “When I bought it,” says Peloso, “it was owned by a lovely Portuguese couple. It was much more closed off and bright pink—Pepto-Bismol pink.”

An easy fix for a man of Peloso’s skill set. But as we’ve seen on any one of the other reality series he’s starred in, Take This House and Sell It, and Renovate My Wardrobe, no job comes without a few challenges. “Originally, the kitchen was going to be completely open,” he says. “Never did I anticipate a chimney would run through the middle of the house. I could have taken it out, but it would have affected the whole house, structurally.” Ever the problem solver, the design dilemma was tackled simply by covering it with the same tile he used for the kitchen backsplash, pulling the whole room together.

The  couple’s home is warm and inviting—and ironically, minimally decorated—adorned with charming accent pieces like a bicycle, which rides on the road and sits pretty in the house, as well as a hand-cast, stainless steel chair by Philippe Starck (pictured bottom right). Says Peloso: “It was one of those stupidly expensive things that I probably shouldn’t have bought. But I thought it was extraordinary.”

The rooms aren’t cluttered with colour either. Not a trace of pink in sight. “It’s essentially black, white and grey with little splashes of orange and red,” says Peloso of his choice to stick with neutral tones. “[My work is] colour, all day, every day. So coming home, I wanted it to be a palette cleanser; I want to get that out of my head and have a sort of nothingness.” 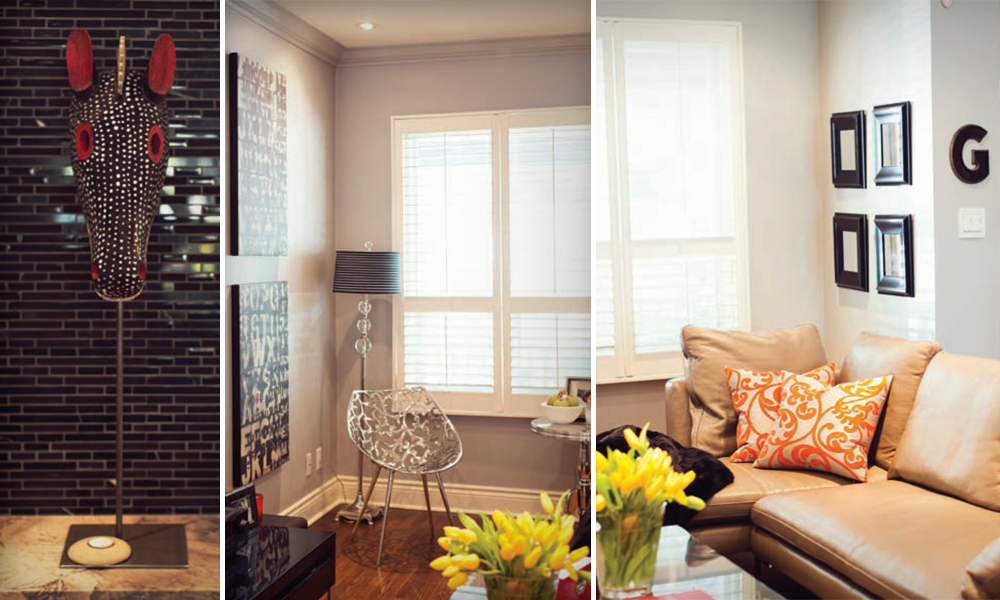 Because behind closed doors the focus is on time with Mahabir, who Peloso joyfully admits is often making dinner by the time he arrives home. “Sheldon is a fantastic cook. It’s really good food and good for you. By the time we sit down for dinner and spend time talking about our day, it’s time to go to bed.”

The neighbourhood is another source of solace for the couple after a long and tiring work week. Mahabir, who works in corporate governance, placing board members at corporations across Canada, doesn’t hesitate to gush about the charms of Riverdale: “I like the fact that it’s close to downtown, but feels as if you’re far removed from it all,” he says. “I don’t feel as if I’m living on top of someone else. I like the openness and the fact that I can walk into the backyard and there’s grass. Living downtown, you walk outside and you’re in it. Here, there are people walking their kids to school. It has a real neighbourhood feel.”

The pair have lived here together for four years. Naturally, they met at a tile store. Though it was hardly love at first sight. “Often, what happens to me when I go to places where people are buying home decor, people stop and say, ‘Can you tell me what you think about this?’ I say, ‘Sure,’” Peloso explains with just the slightest of eye rolls. Mahabir asked for his opinion on tiles for his parents’ foyer, but, unlike the others, Mahabir doesn’t watch TV and had absolutely no idea who Peloso was. As usual, the designer shared his wealth of knowledge. Putting it a bit more flowery, says Peloso, “He probably thought, ‘What a f*cking know-it-all.’”

That fateful meeting led to several dates, though Peloso’s career in the media spotlight wouldn’t come up until one night when a bottle of wine showed up at their table, courtesy of the restaurateur. But Mahabir wasn’t impressed: “In my head, I thought, ‘Oh my God, he brings everyone here. How did I get myself in the middle of this? I’m smarter than that. I can read through this,’” he recalls.

Until that point they’d kept career chatter out of the blossoming romance. “I had it in my head that he was an accountant,” Mahabir says, laughing. A breath of fresh air for the designer who was thrilled to finally meet someone who didn’t want to date the edited version of Peloso’s on-screen TV persona. “That is who I am,” says Peloso, “but that’s me at work, which isn’t me all the time. Having someone who didn’t know me like that was actually kind of endearing.”

But what really keeps Peloso grounded is his 11-year-old daughter Elix, who for 10 months of the year lives a world away with her mother in Dubai, something that, in an off-camera moment, makes the on-air veteran visibly emotional about missing his little girl. The story of Elix’s conception is something out of a movie, like one of those puppy love promises we all make but never actually keep: “Her mother and I went to high school together. We made this deal that if we got to be 35 and neither us were married or had kids, we would have a child.” Incredibly, they did. But time zones have always been a factor. “It’s evening and time to go to bed for her when it’s 10 in the morning here.But when she comes to town for those two months, Peloso ensures Elix has a space to call her own. “For her, having a bedroom gave her a sense of permanence or a sense of place. It feels like home to her.” 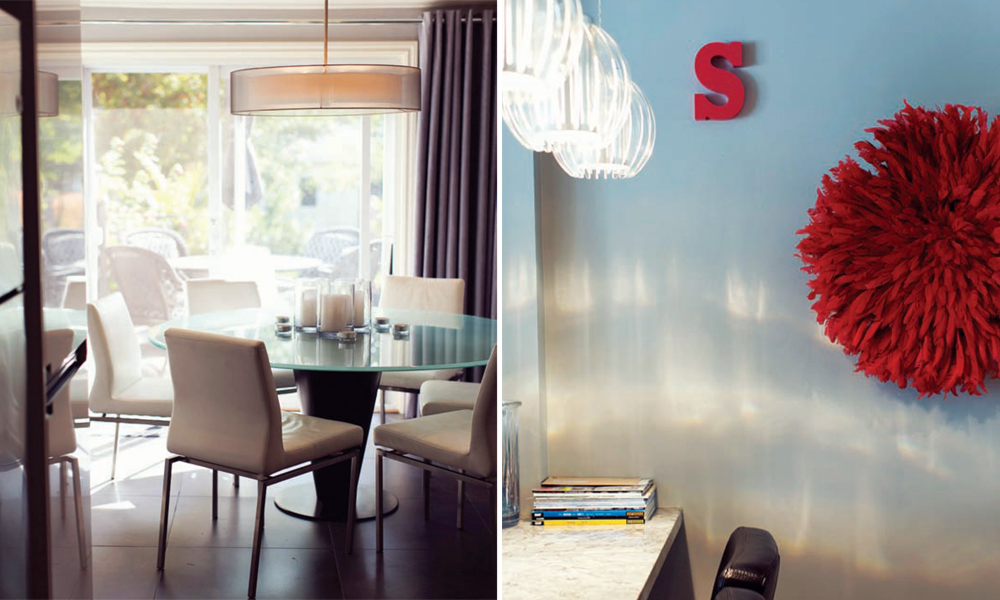 With nearly two decades of décor industry experience, the design veteran’s career continues to evolve. He recently joined forces with another designer dynamo, Jamie Alexander, to form Peloso Alexander Interiors. Now the duo tackles both commercial and residential projects, building on Peloso’s international portfolio. “My background is fine art. I’m a creative guy,” says Peloso, recognizing that his own shortcomings made the merger a no-brainer. “Jamie’s background is business, so he has that organizational skill. He’s also a very capable designer. Plus we have a very similar aesthetic.”

Their team works with up to a dozen clients at a time, including a current project converting a funeral home into a loft space for a law firm. They’re also looking to launch their own furniture line. But when you ask Peloso about his professional bucket list, he goes far beyond designing a new line of chairs with his name on it. “It’s reasonable now to build a pop-up, a restaurant or an event space where you can digitally change the entire thing,” he says, going off on a tangent that’s indicative of his passion to forever refresh and reinvent spaces. “We could start the evening at the pyramids and end up in New York City. We can digitally project anything and change what happens on every wall. Your environment can continually change. We’re in a place where our attention span is Twitter. So does space have to adapt to keep us interested?” And don’t get him started on 3D printers that will soon be able to spit out entire buildings. “One day soon, instead of going to the hardware store to buy a screw, we’ll simply print one out. How long will it be until we’re able to say, “I’m having a party and I’d rather have 10 chairs than a sofa. Print. A lot of people will say we can’t do that. And you’ll say, ‘Why?’”

*This article originally appeared in IN Magazine’s November 2013 issue.