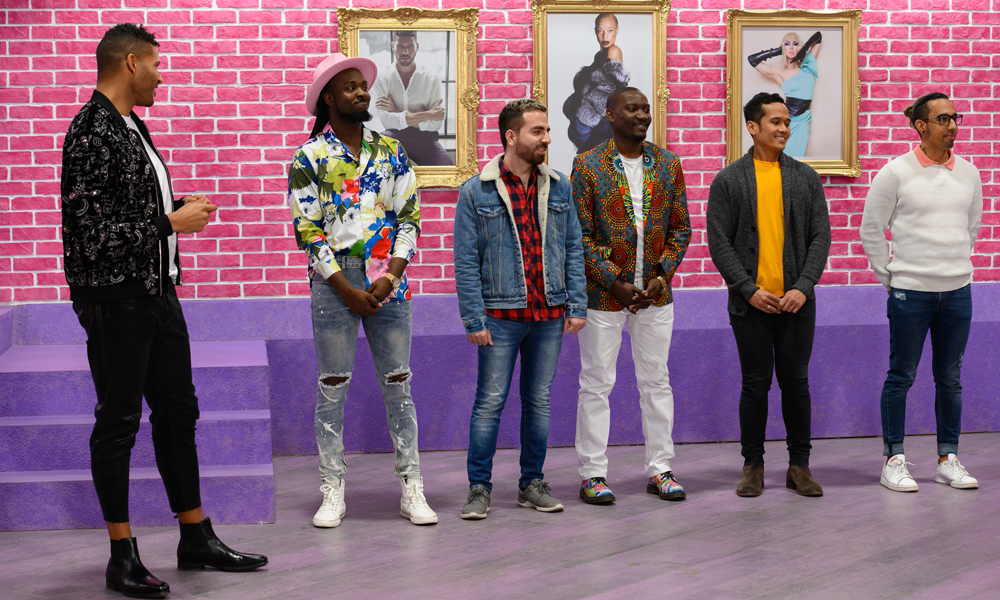 Newcomers to Canada werk the runway, meet their drag mothers, and are welcomed home on Canada’s Drag Race…

Aside from the legendary Snatch Game episode, when you ask any Drag Race superfan what their favourite episode of each season is, it will undoubtedly also be the episode with the most heart. Over their 12 seasons Rupaul’s Drag Race has given drag makeovers to veterans, the cast of Little Women LA, superfans, and even the queen’s own family members… Canada’s Drag Race is giving makeovers to a group of people with a message, and an incredible platform that needs our attention now more than ever. The five individuals who received drag makeovers during this special episode are all newcomers to Canada, thanks to Rainbow Railroad.

Executive Director Kimahli Powell says Rainbow Railroad’s mission is to help persecuted LGBTQ+ people find new homes when it becomes unsafe for them to be themselves in their home countries. “Right now, in over 70 countries around the world there are laws that criminalize same sex intimacy and those laws and the persecution they bring sometimes puts lives at risk” says Powell. Rainbow Railroad exists to help facilitate those lifechanging journeys for people seeking new homes where they will feel safe and supported. Powell says that while we are working towards the goal of having everyone live in countries where they are safe, sometimes being able to flee is the difference between life and death. 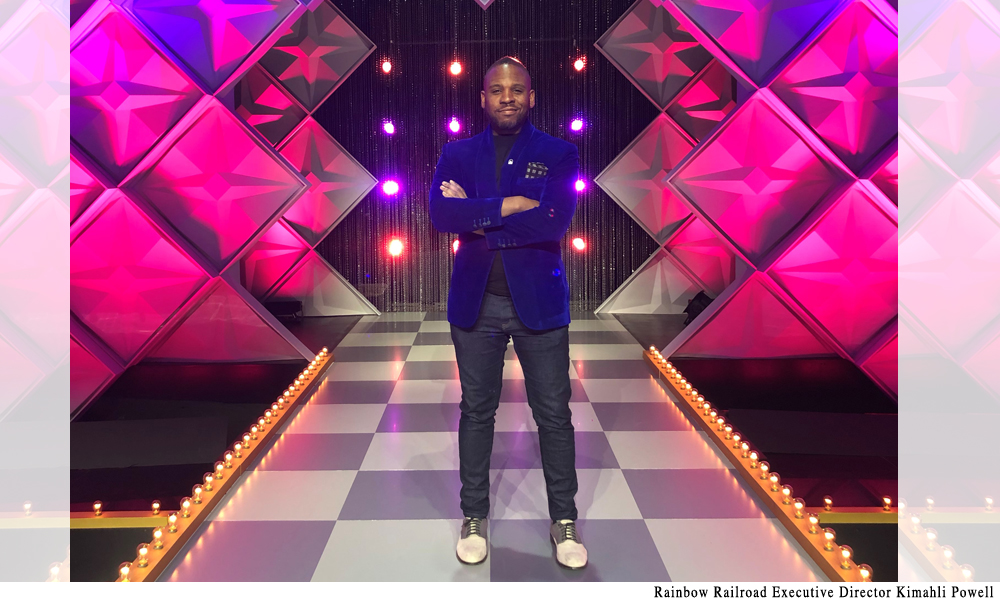 One of the participants in this very special makeover episode is Rainer Oktovianus, who along with his spouse (who is also a featured participant in this episode), moved to Vancouver from their home in Jakarta, Indonesia in March of 2016. “Back in 2016 it was a very horrible time in Indonesia, especially for the human rights conditions” he says. Rainer and his husband Eka Nasution browsed online for places to live where they would be accepted before discovering Rainbow Railroad. They sent out letters asking how they could apply to be refugees and explained that this process is not as easy as some people may think. “It’s important to know how much work that the people at risk do on their own. How much bravery it is for them to make this incredible journey.” says Powell. Rainbow Railroad exists because sometimes the wait can take too long, and Rainbow Railroad works by finding as many pathways for people seeking a new home as possible. And while Canada has accepted the largest number of refugees in recent years, Rainbow Railroad helps people relocate all over the world. Powell explained that the majority of people they help end up relocating to various European countries, where it is a little easier to facilitate asylum.

Rainer and Eka got married in Ottawa in 2014 during a two-week vacation. Oktovianus says after they returned to Indonesia from their vacation, they realized things were getting worse. Their sights weren’t specifically set on Canada though. He says they initially were just trying to make a logical decision on where to go, based on countries that accepted same-sex couples to live openly, and freely. After a long process, which included letters, and interviews over Skype, Rainer and Eka decided that Canada would be the place for their new home. The two have been living in Canada for almost five years, and as Oktovianus explains, life has been very different for them since moving. “All the things that I can do with my spouse here, are forbidden there, and it’s punishable by law. For instance, just holding hands in public, it’s a big no-no.” He is continually thankful for Rainbow Railroad, for being able to live freely. “I am thankful. I should say that I am blessed to say that I was able to find a new home where I can express my freedom and having a new family” he says. Oktovianus says he is still in contact with some people back in Indonesia, and things there have continued to worsen since his move in 2016. They are actively continuing to pass anti-LGBTQ+ laws, including laws that condemn males from dressing or acting “feminine”. Meanwhile, in Canada that very same thing is celebrated on a mainstream television show no less.

Aside from Rainer, and Eka, there are three other incredible individuals who participated in this episode that Rainbow Railroad has helped bring to Canada. “Each of us have different stories of course, but we have one similarity is this escape from I would say, life in hell. It’s really unthinkable what people can do to other people just because they have a different gender, or sexual orientation” he says. Oktovianus hopes that the audience will realize and be thankful for the human rights that are upheld in Canada. Powell agrees. “It’s been 15 years now since Canada has had marriage equality, which is remarkable. And we still have a lot of work to do here in Canada to ensure that everyone who is part of the LGBTQI community including black, brown, indigenous, people of colour, trans folks, and youth are also feeling equal here in Canada” he says. Powell explains that one of the remarkable things about shows like Drag Race is that they are a symbol of how far we have come.  “We are embracing playing with gender, we’re embracing people’s stories, and that is not the case in so many places around the world” he says.
r
Before moving to Canada, Oktovianus had never heard of shows like Drag Race. The closest he’s gotten to being in drag prior to being on the show was walking in heels for a charity event in Vancouver. To get to participate in a once in a lifetime experience like this was special, and to do it with his spouse made it that much more interesting. “People thought we would help each other since we live under the same roof but, no. I told him even though he is my husband, in this episode we are enemies, we are competitors”, he jokes. Drag was harder than he expected from watching it on television though. Oktovianus explained that he was in the makeup chair for hours, and in drag for even longer, but the hardest part? Walking in heels. “I couldn’t feel my toes for about two weeks!” he says. The most memorable part for Rainer was of course meeting the queens, the queen of the north herself Brooke Lynn Hytes, as well as the other fabulous judges. 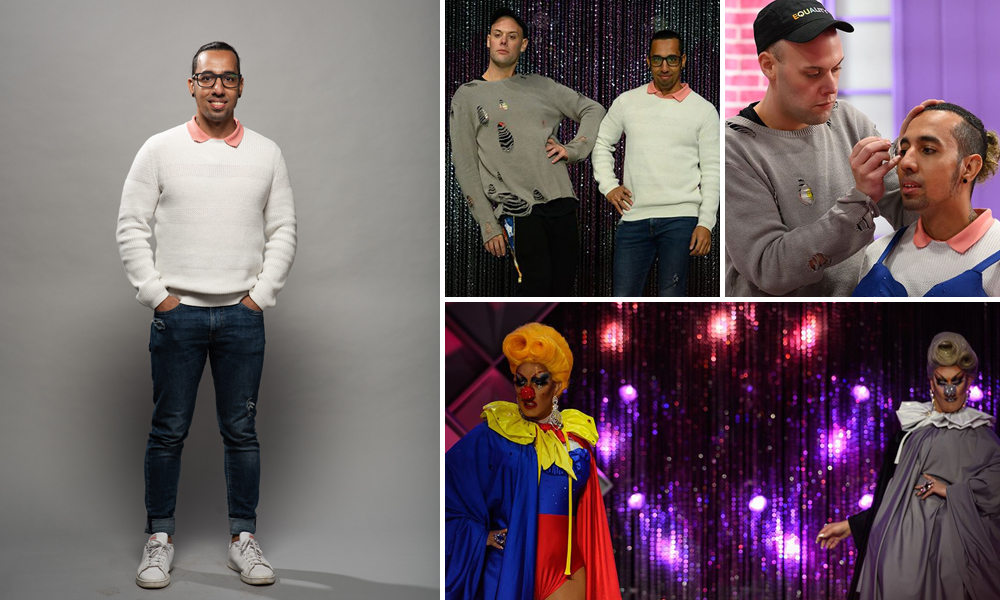 Oktovianus is an activist, and says he continues to try and help people in the same situation that he was in connect with organizations like Rainbow Railroad to start new lives. Powell mentions that not everybody in this country has the same rights. And we need to fight to make sure that people in Canada, and around the world are protected. Rainbow Railroad provides lifelines for people that need them. “It’s important to know is that life is not perfect for newcomers in this country. It can actually be quite challenging, especially now during COVID-19. So while we want to celebrate the positive stories, we also need to understand that being a newcomer in Canada is challenging” Powell says. He explains that not only is there not enough resources for newcomers, but as LGBTQ+ folks we should also be doing more to support charities and organizations who protect LGBTQ+ refugees. Oktovianus says the message he hopes people would take from this extraordinary episode is to just express your love, and express your freedom of being you, whoever you are. “You don’t have to hide; you don’t have to be anyone else. And I’m really, really grateful to be able to have this new home, and this chosen family here”.