The Lost History Of The Leather Harness 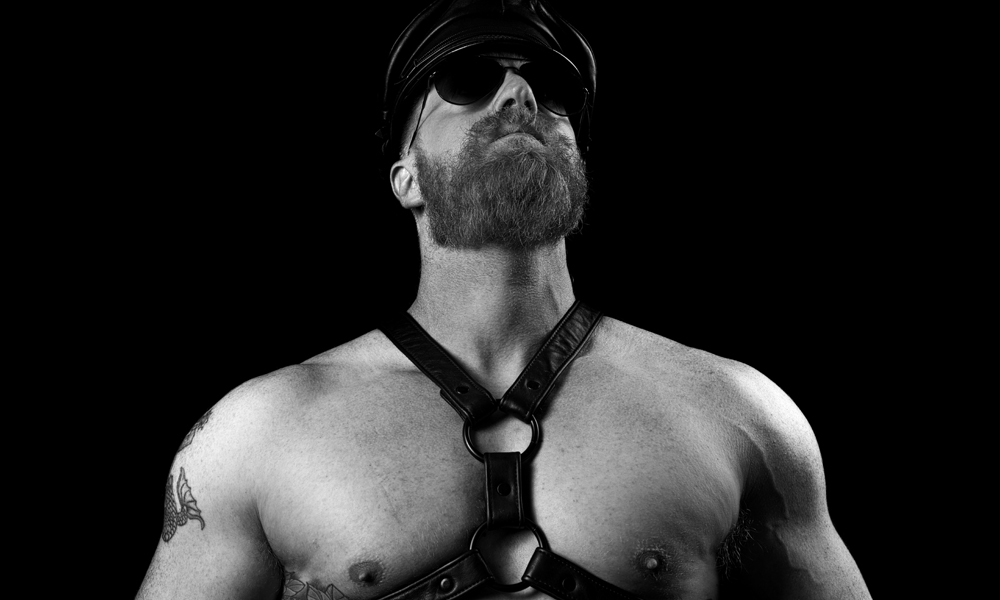 It has no documented history, so IN spoke with experts and consulted the archives to trace the lineage of one of gay culture’s most popular garments…

When I burst through the closet doors, my first expensive purchase was a leather harness. I wanted to fit in, and knew the harness was a staple garment for gay men. But how did we get here? How has the leather harness become such a coveted and symbolic garment among gay men?

Unfortunately, the harness, like much of leather history, is one of myth and legend, and very little is concretely recorded.

“I had someone researching this over a year ago and we weren’t able to find an origin,” Mel Leverich, archivist and collections librarian at the Leather Archives & Museum in Chicago, shares over email. After carefully sifting through the archives, Leverich tells INthat leather harnesses appear in their earliest bar photos, dating back to the mid 1970s, and notice increased frequency into the ’80s.

With this information, we can estimate the leather harness originated somewhere between 1972 and 1976.

“As far as I know, there is no history of harnesses,” Gayle Rubin, a leather historian and anthropology professor, writes me, adding that there were harnesses around the time IML, an annual leatherman contest and conference, began in 1979. This further validates the Leather Archive’s timeline. “You might also look through Tom of Finland’s work and see when he draws harnesses and how he depicts them.”

Tom of Finland
The leather community first emerged after the Second World War, when servicemen often had difficulty assimilating back into mainstream society. For many, military service allowed them to explore their same-sex desires. So when the war ended, they sought sanctuary inmotorcycle clubs where they met others who shared a like-minded disaffection with the conformist culture of post-WW2 America.In these spaces,leather clothing was everywhere, signalling a masculinity alluring to gay men who were weary of being depicted as effeminate.

This hyper-masculine image was further popularized by artist Touko Valio Laaksonen, better known as Tom of Finland. His highly masculinized, homoerotic art went hand in hand with the emergence of the gay leather scene.

Among leather enthusiast groups, many credit Tom of Finland for the popularization of the harness. During a Leather Archives & Museum presentation at IML back in the early 2000s, Scott Erickson, founder of The Leather Journal (“the BDSM/Fetish/Leather community publication of record”), says his understanding was that Tom of Finland couldn’t draw pictures of men having sex due to censorship laws.

To get around this, the artist drew men as historical depictions (which were legal in the interest of historical writings) and often depicted gladiators strapped in harnesses. “Gay men just copied what they saw,” Erickson explained to IN. “When someone wears a harness, they are wearing a symbol of censorship.”

Others believe the harness was born from Japanese bondage. In the early 20th century, kabuki theatre introduced bondage-style rope ties into its highly stylized performances, and many of these ties resemble the harnesses worn today.

These days, the harness is more popular than ever – even recently having a moment on the red carpet, when Michael B. Jordan wore one to the 2019 SAG Awards– but it has lost its meaning within the community; so too has it lost its history. What we know for certain is the harness has longevity, outliving many other leather items that were customary in leather bars.

When speaking about this with people in various leather groups, it becomes clear that the reason why isn’t all that complex. Harnesses are sexy to wear and to look at. They hug our muscles in all the right places. They are great to flag colours if you’re into certain sexual acts. They are all these things, but most of all, they feel personal to each of us, and to the community as a whole.