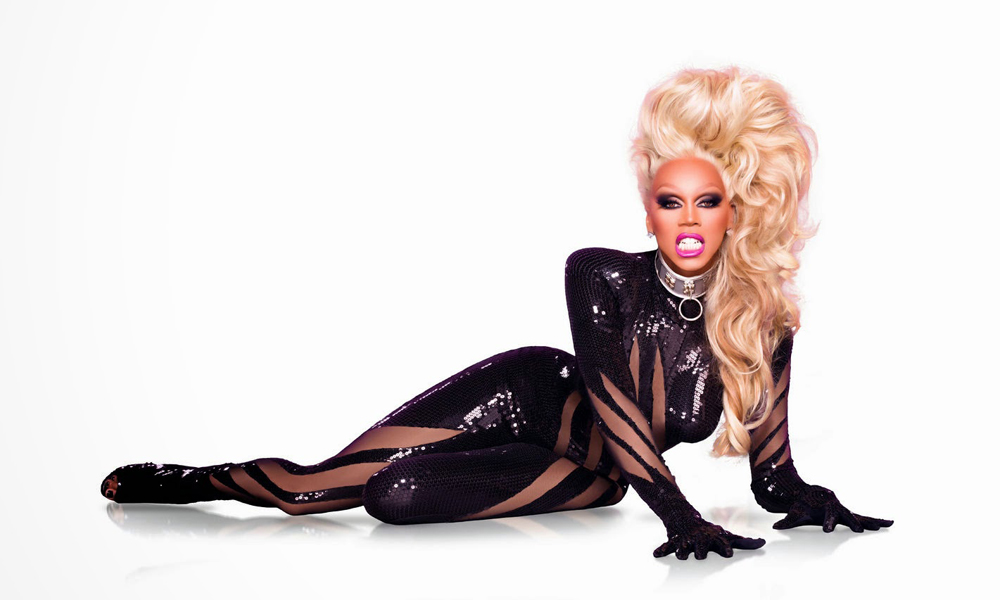 RuPaul needs no introduction. Google “drag queen” and the first search result is her perfect brows and heaven-high hair.

Whether you’re a diehard fan of RuPaul’s Drag Race or just loved her as Jan Brady’s guidance counselor in The Brady Bunch Movie, or still work out to her anthemic ‘90s hit “Supermodel (You Better Work),” we can all pretty much safely agree that she is indisputably the doyenne of drag.

And interviewing RuPaul is a sickening experience—in drag speak, a good thing. But with so many questions and so little time, editing it all down was harder than mastering the perfect tuck. Research included everything from watching a variety of music videos from any of her five studio albums to flipping through repeats of Untucked, her behind-the-scenes spin-off show.

Before the call, I’m given a top secret number. I’m told to ask for Ru. While on hold, Ru’s Glamazon plays in the background. I hum along all the while imagining Ru sitting in her L.A. office, a leopard print rug on the floor and huge windows overlooking the Hollywood sign. On her right is a desk calendar with daily inspirational quotes; on her left, a bedazzled phone with a flashing pink light (me!).

With a new album on the way, as well as the launch of her sixth TV season of Drag Race, Ru was ready to talk about everything from wigs and witches to her greatest hits and drag queen fits.

Hello Ru! What do you think of Toronto, and when was the last time you were here?
RuPaul: Let’s see… it’s been way too long. I think I was there in 2008. It’s one of my favourite cities in the world. When I got my MAC cosmetics contract [in 1994], they flew me up to Toronto to go through the plant, where everything was made. I love the people. I’ve made movies up there and have had great experiences. And if you noticed, I do say, “Torono.”

Spoken like a true Torontonian! Congratulations on all of your success with RuPaul’s Drag Race!
Now, don’t you mean “Con-drag-ulations”?

Yes! “Con-drag-ulations!” Fans are really, really excited about this season.
And they have reason to be. This season is just off the hook. The kids are all so skilled. They’re so talented and it makes for a great competition.

We see a lot of drag queens stand up on stage and pour their hearts out to you on the show. The stakes are really high for them and there can be a lot of tears. What goes through your mind when the contestants cry in front of you?
I love seeing people’s honest and true emotions and feelings. It’s beautiful to have that juxtaposition of all of the artifice and then having the humanity there at the exact same time.

The queens can get quite loose-lipped on your spin-off show, Untucked. How much Absolut Vodka does it take to film one episode?
It’s un-measurable. Gallons! (Laughs) The truth is we had to limit the amount that the girls could have. I think they can only have one drink back there.

Breakout star of season five, Alyssa Edwards, recently called your show, “The RuPaul Hunger Games.” Is season six really that cutthroat?
(Laughs) I love it! This is the Olympics [of drag]. This season especially. Because our show has been on the air for so long, they all know how to play the game and they come prepared to win. They’ve worked their whole lives [to be here]. It’s very exciting.

Speaking of Alyssa Edwards, it was announced that you were producing a spin-off show for her. Can you give us an update on that?
Well it has a pilot, and we have to wait to see if anybody’s going to buy it. As of right now, it hasn’t been bought. It’s unfortunate.

I think it’s safe to say that you’re the world’s most famous drag queen. Out of curiosity, what does RuPaul’s bathroom look like? Is it a jungle of wigs and lashes, or are you a neat freak?
No, I’m not a neat freak, but it is all clean because I have people who help clean everything up. (Laughs) I like the bathroom to be a clinical place. It’s almost like an operating room.

That’s where I put everything together. I have to see really clearly. The lighting has to be perfect and bright.

Your latest album, “Born Naked” is out now. What do you want people to know about it?
It’s my third album with [producer] Lucian Piane, who is a genius. We have so much fun recording together. This album, it’s got the pop/dance storyline, but we also go a little bit more naked in a sense… a little more into my own vulnerability.

Lady Gaga once said that drag queens are the ones who taught her how to “serve.” She tweeted at you during production, asking to be a guest judge this season. What happened there?
Well, we wanted her, but scheduling people during that time is hard. That’s a whole other show. People have no idea how much we have to go through to get the people that we do get. But this season we have great guests. Paula Abdul, Adam Lambert, Neil Patrick Harris… the list goes on.

Who’s your dream celebrity judge, dead or alive?
Oh please, it would be Cher, Judge Judy, Diana Ross, David Bowie and Boy George. All of them!

You’ve been in the public eye as a drag queen for more than 20 years. You’ve watched perceptions and acceptance of drag change over time. What’s the most interesting thing you’ve noticed?
I’ve been in “the life” as we used to say, for a long time, and the pendulum swings and it’s all cyclical. Everything comes and everything goes. The current trend, which is pure acceptance of drag, is lovely. I love it for my girls because they get to work around the world. They are ruling the club scene. But don’t get it twisted, it will change. It always does. I was in my teens in the ‘70s and I got to see ideas, morals and trends change. Then in the ‘80s, it regressed completely backwards.

And you think that will happen again?
It always has. That’s what this world is.

You’re such a positive influence on your show, and even more so on Twitter. You always deliver great, inspirational anecdotes. Were you always this way?
There are times when I’m not that way. But I wouldn’t behave that way in public. I understand what my role is. I’m in show business. My audience is my audience. They’re not my therapist. I save that shit for my shrink. So if I’m going to say something and I have an audience, I’m going to say something of value, whether it makes you laugh, or it’s some takeaway that you can use in your life.

You have one of the most recognizable and contagious laughs out there. Who makes you laugh the most?
Probably me! (Laughs) You have to. It’s my favourite thing to do on this planet. When I was in high school, I was around a lot of hippie-dippie kids and this one girl who professed to be a witch. She always said, “The greatest spell you could cast is to laugh.” I’ve never forgotten that.

We asked RuPaul what was the first thing that came to mind when we threw a series of random topics at her:
TOM DALEY: “Yummy!”
TO WONG FOO, THANKS FOR EVERYTHING, JULIE NEWMAR: “Breakthrough.”
BRITNEY’S “WORK B*TCH”: “… coulda been more.”
TWERKING: “Bring it.”
THE SURPRISE “BEYONCÉ” ALBUM: “Conceptual.”
KHLOE KARDASHIAN: “Lovely.”
LADY BUNNY: “Funniest person I’ve ever met.”