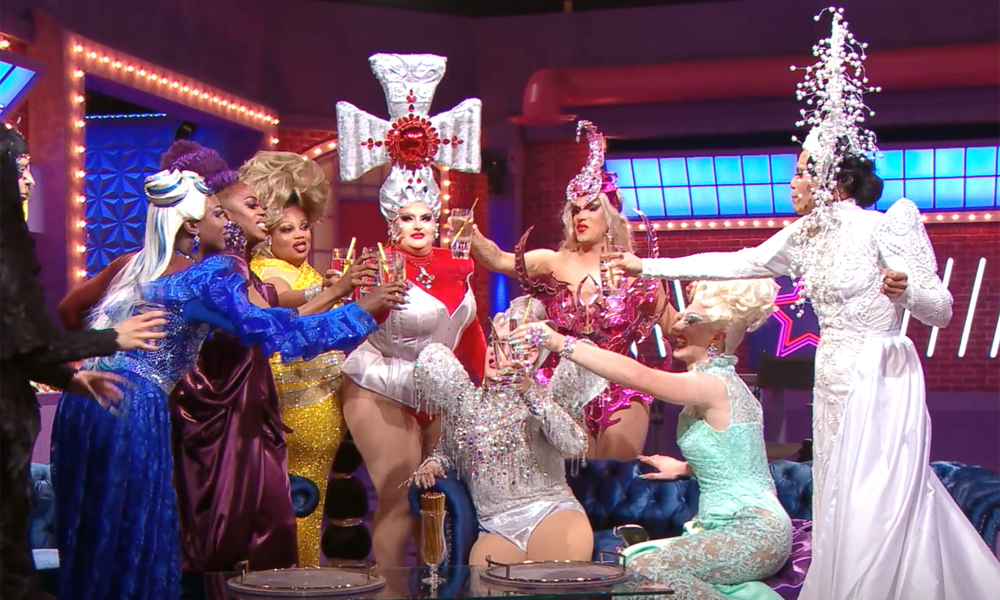 The final four queens have an intergalactic photoshoot, one final runway, and a lip sync smackdown before a new queen of the world is crowned…

Last week we said “au revoir” to UK queen Vanity Milan after the queens over-acted in a spy themed movie. Victoria Scone and Rita Baga earned top spots for the week but it was Rita that won the lip sync. This week the final four will compete in a lip sync smackdown for the crown. Who will be our new global reigning champ? Let’s get into it.

The episode begins with the top four entering the werk room following Vanity’s elimination. They read her lipstick message before heading over to the couches to debrief on the elimination. Rita lets the group know why she chose Vanity and Victoria reveals that she also chose Vanity to go home. Ra’Jah tells the others she respects how everyone chose to play the game and that it really has been a sisterhood from the jump of the season. It’s a new day and the fierce final four enter the werk room excited that they’ve made it to the finale. They’re interrupted by one last video from Ru reminding them that this is their last chance to prove they deserve the global title. Traci enters the room to tell the queens that they will be competing in a lip sync smackdown FOR THE CROWN. But first, they’ll take part in a photoshoot that’ll spread their eleganza across the universe. Who is waiting for the queens at their final photoshoot? Drag Race icon Monét X Change. Monét gives each of the queens a little pep talk and helps direct each of their interstellar photoshoots.

It’s coronation day and the queens make their way into the werk room for one last time. Around the work table they talk about who they personally want to lip sync against. They get ready for their smackdown battle royale and chat about their time in Canada and highlights from the competition including meeting the Prime Minister.

Out on the main stage Brooke introduces the final panel of judges, Brad, Traci, and this week’s extra special guest Monét X Change. On the runway the category is “Coronation Eleganza Extravaganza”. All of the eliminated queens make their way down the runway one last time with their showstopping looks before the final four strut in their regal lewks.

Following the runway, the remaining four get final critiques from the judges. They tell Silky that she’s really stepped into her spotlight and saved the best for last with her final look. They show her the best photo from her photoshoot and SIlky talks about what the competition means to her, which is feeling truly beautiful and competing with her sister Ra’Jah. Brad tells Ra’Jah she is a powerhouse and a runway assassin. Traci tells her she represents black excellence. They show her the best photo from her shoot, and Ra’Jah talks about how her Drag Race journey became a full circle moment. Traci tells Victoria she is forever impressed by her and that once she opened up there was no stopping her in the competition. Brooke shows her stellar photo and Victoria tells the judges she felt like she really belonged in the competition and how this season has made her realize she is more than worthy when she steps into a room. Victoria uses her time to propose to her girlfriend at home which has also become the first proposal on Drag Race herstory. Brooke tells Rita she has really polished her drag since her first run on the show. Traci tells her she captivates audiences and that she always gives every challenge her all. She takes a look at her best photo. Rita talks about how hard it was for her after her original season and how coming back to compete has brought her confidence back.

Backstage all of the queens from this season have a drink and chat. Ra’Jah and SIlky give Icesis a sweet and supportive pep talk. Kendall asks for the tea this season and the rest of the queens deliver. Rita finally reveals that she had an alliance with Silky. They cheers to a season filled with sisterhood, but it’s time to crown a winner.

Back on the main stage the final four (now in more comfortable clothes) will select songs from boxes to see who will face each other in the first two lip syncs of the night. Since Rita is the winner of last week’s lip sync she picks first, and she picks box number two. She chooses “Broken Bones.” Victoria chooses box number three which is “Do It.” Ra’Jah chooses “Do It.” Which means Ra’Jah will face off with Victoria in round one. They take their spots on the stage and get right into it with their lip sync to “Do It” by Nelly Furtado ft. Missy Elliot. After a bouncy performance Brooke announces the winner of the first lip sync is Ra’Jah who will move onto the final lip sync. This means that Victoria’s time in the competition is over but she doesn’t leave empty handed…she has a fiance now! Next up Silky and Rita face off to “Broken Bones” by Love Inc. Brooke and the judges choose Silky as the winner of the second lip sync. The final Canadian queen in the competition Rita, is officially out of the running for the global crown.

We’ve made it to the final lip sync… Silky and Ra’Jah compete one last time. The two finalists lip sync to “River Deep, Mountain High” by Céline Dion. These queens did not come to play. After a passion-filled performance Brooke announces that the winner of Canada’s Drag Race Canada Vs The World and the queen of the mother-pucking world is… Ra’Jah O’Hara! Condragulations to our newest global superstar!

Join us in two weeks for recaps of an all new season of RuPaul’s Drag Race on January 6.