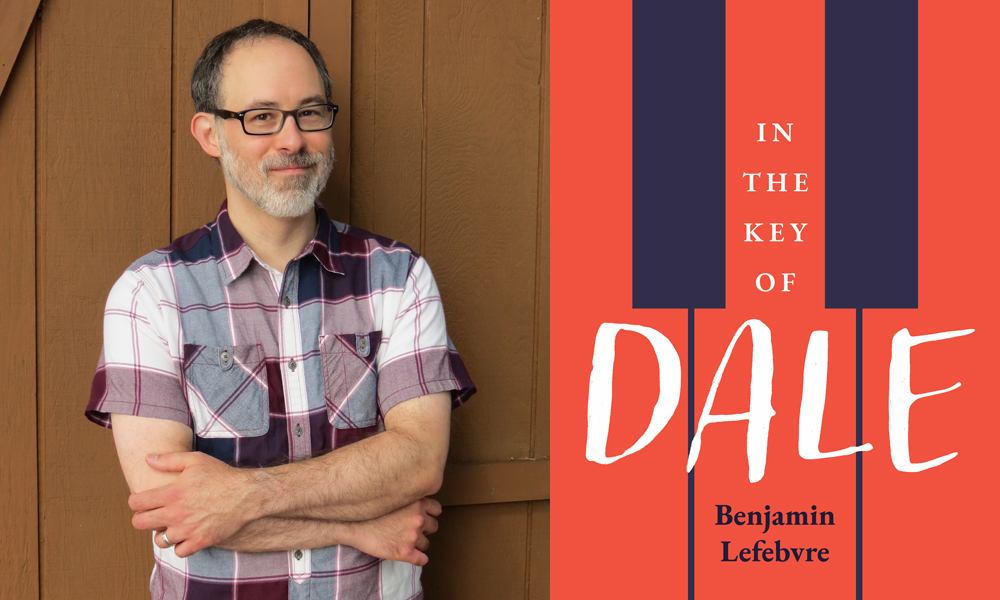 We talk to Lefebvre all about his inspiration behind his book, why he chose to structure the novel as a collection of letters, and what he’s reading this fall…

Benjamin Lefebvre’s new book is one of those YA novels that can be enjoyed by teens or adults alike. In the Key of Dale is a relateable, moving, and enjoyable read all about growing up, fitting in, and going from a place of grief to healing.

Told in the epistolary form through letters written to his late father, the novel follows 16-year-old Dale (who, until now, has been quite content to remain a “loner” and spend all his time alone singing and playing music, eagerly awaiting adulthood when real life will begin) and his unexpected friendship with a classmate that begins to take a turn for the romantic.

Make sure to grab a copy of the book here and add it to your reading list. But in the meantime, read on as we chat with Lefebvre all about his inspiration behind his book, why he chose to structure the novel as a collection of letters, and what he’s reading this fall.

Tell us about Dale and what this story is about, in your own words.

In the Key of Dale is about a queer and introverted teen music prodigy who doesn’t feel any need to come out to anyone, even though his mother seemingly wants him to. Most of the time he’s happy being invisible at school and enjoys singing and playing music the rest of the time, but at the start of the novel, an argument with his mother prompts him to write a letter to his father, who died when Dale was nine. And when Dale discovers how much he enjoys writing his thoughts down, he keeps going with more letters, especially after he bumps into one of his classmates at their mutual friends’ wedding. To his surprise, he starts to feel closer to his father, and since the remaining adults in his life seem so keen to offer him unsolicited advice, he discovers the benefit of addressing his problems to someone who can’t talk back.

What inspired you to write this book?

I started writing this book about four years after my own father died, when I was 31. Even though the novel isn’t autobiographical, I used my father’s death as a starting point in thinking about the longer-term stages of grief after the loss of a parent. I started to wonder how someone like Dale might reconnect to the father he lost as a child through the form of letters and how that reconnection might be complicated if new information about his father came to light. I also was interested in writing a book that featured a queer teen character but wasn’t centrally about coming out. Coming out can certainly be a major turning point in the life of any queer, trans, or gender-variant person, but that’s not where the story ends by any means.

Dale is only 16, but I think coming-of-age stories like this can be appreciated by readers of any age.

I definitely agree with this! Adolescence is a stage of life that everyone goes through, even though the way adolescence is lived is obviously unique to each individual. While the primary goal of teen fiction is to offer relatable and engaging stories to teen readers, lots of adult readers enjoy reading books in this genre too—either because they feel nostalgic for their own adolescence or because they’re relieved that their teen years are behind them! There’s also such a variety of books within young adult fiction—literary and mainstream, realistic or speculative, historical or futuristic, comedy or drama—so there’s something for every taste.

Why did you choose to write an epistolary novel, told in letters?

I wanted to capture the immediacy of a sixteen-year-old character’s perspective—most narrators tell their stories sometime after the events have happened, but narrators of epistolary novels don’t have the luxury of hindsight: they write in the immediate aftermath of the events that happened and have no way of knowing what will happen next. In most works of fiction, a first-person narrator simply tells the story, and there’s no real indication that the narrator is addressing anyone in particular. It occurred to me that if I wanted to explore Dale’s long-term grief for his father, having him address his father directly in his letters would be a good way to do so.

What message do you want to leave readers with?

I don’t want to give too much of the plot away, but at one point Dale overhears one adult character telling another that Dale’s behaviour isn’t “normal.” And Dale’s response reveals everything you need to know about his perspective: “Who the hell wants to be normal?” I hope readers will be inspired by Dale’s strong sense of self and will find ways to feel good about themselves as they are—whatever that means for them.

What are you reading this fall? Any must-reads to recommend?

I just finished reading two amazing YA novels that I highly recommend: Malinda Lo’s A Scatter of Light and Tanya Boteju’s Bruised. Each book is about a queer young woman of colour having an unexpectedly transformative experience within a community of strong women and through a new activity: visual art in the case of A Scatter of Light and roller derby in the case of Bruised. And for readers of the recent Netflix series Heartstopper, I highly recommend the original graphic novels by Alice Oseman, which I devoured in two days. All of these books centre queer characters and focus on self-discovery, love, and community—themes that will resonate with readers of all sexual and gender identities.