Skip to Content
Home / Entertainment / Queer Little Nightmares: Get In The Halloween Spirit With This Must-Read Fiction & Poetry Anthology 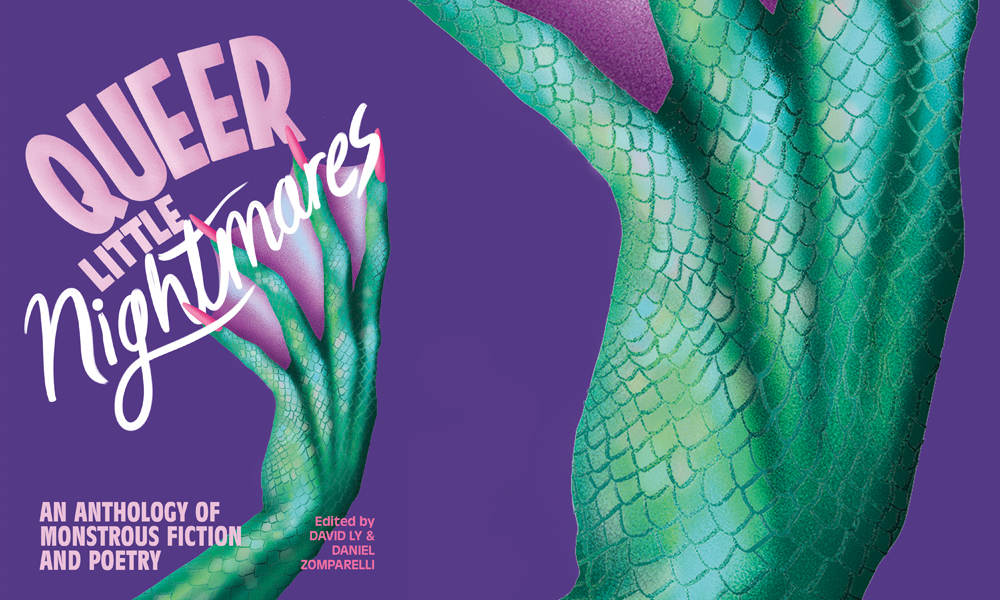 Queer Little Nightmares: Get In The Halloween Spirit With This Must-Read Fiction & Poetry Anthology

Move over pumpkins and witches. We have just the thing to get you into the Halloween mood: this new book all about monsters. Described as “deliciously dark and charmingly camp,” Queer Little Nightmares is a literary anthology that includes submissions by writers and poets that reimagine classic monsters (like Godzilla, Dr. Jekyll, and Eve) and subverts their reputation as objects of fear, and instead celebrates them through a queer perspective. The book explores how the LGBTQ+ community came to identify with monsters–non-conforming characters that were traditionally marginalized and pushed into the shadows—through stories and poems that are playful, emotional, and thought-provoking.

Grab yourself a copy of Queer Little Nightmares: An Anthology of Monstrous Fiction and Poetry here, and in the meantime, read on as we chat with co-editors David Ly and Daniel Zomparelli all about their inspiration behind the book, which monsters they loved seeing reimagined, and what they think it means to be (and to love) a monster.

What was your inspiration behind this book?

Daniel Zomparelli: For me, it was just the general love of horror movie villains. I grew up obsessed with Freddy Krueger and Pennywise the clown and we noticed it was pretty common within the LGBTQ+ community, so we wanted to see what writers would do with a general theme of monsters.

David Ly: I was the same way, just having always loved monsters–creatures that are larger-than-life scary but really awe-inspiring as well. After talking with Daniel for a while about horror movies, villains, and monsters, we decided that maybe it was a good idea to see what others thought about them too.

Why did you want to create this anthology now?

DZ: I think once we had this idea for the anthology, we just pitched it immediately. It felt like it was a concept that was floating around already, so we wanted to move quickly.

DL: And luckily the first publisher we pitched to, Arsenal Pulp Press, was on board with our whacky idea. We wanted to create a book that just spotlighted monsters, and to really have them be the focus of the book and be written directly about.

What was the process like creating this anthology? How did you go about selecting the poets and authors to include?

DZ: We spent a lot of time figuring out who would be a great fit for this anthology and asking them if they would be interested in writing something. Then we opened it to the public because we knew there were so many who would love to take this theme on, and we were right; it was an amazing response to our open call. Selecting from the submissions was difficult because there were so many great submissions and we could only choose a handful. We tried to focus on making sure we had a variety of monsters and different approaches to the theme.

DL: Yeah, at one point we had so many pieces that we liked through the submissions that we ended up having to make a list of monsters that were being written about. And, I think, from there we whittled it down to the collection of monsters we wanted to feature.

Is there a particular monster that you were excited to see re-imagined through a queer lens?

DZ: It wasn’t something I was even thinking of, but I loved reading the re-imagined version of Dr. Jekyll and Mr. Hyde by Eddie Boudel Tan. He really dug deep into that narrative and pulled it off spectacularly.

DL: Same here with the poetry: I wasn’t focused on seeing which single monster could be re-imagined in a poem, I just kept an open mind about what could stand out to me. Kelly Rose Pflug-Back’s poem “The Kyrkøgrim” was just the case. That poem is so haunting and the pull of emotion it has is spectacular. All around a monster I did not know about!

What do you want readers to take away from this anthology?

DZ: I hope they have fun! I know that sounds simple, but that’s what horror is for me and I think the contributors, even when dealing with complex and dark themes, really made it exciting and new.

DL: Likewise! The pieces inside are a celebration of queerness as much as they are love letters to the monsters that resonate with the writers. Even at their scariest, the monsters have had their humanity so finely crystallized in these poems and stories that I hope readers will recognize and have fun reading about.

What do you think it means to be and to love a monster?

DZ: For me, it’s always about what makes someone or thing a monster, that is the lovable aspect. The monster is supposed to be this terrifying thing, but when you reverse it, it’s the monster vs. the rest of the world, which can be a relatable feeling.

DL: What is a monster if not to be loved bravely? It’s a sheer act of courage to love the monster(s) that everyone else is seemingly terrified by, and I think oftentimes, that kind of love can be the strongest kind.