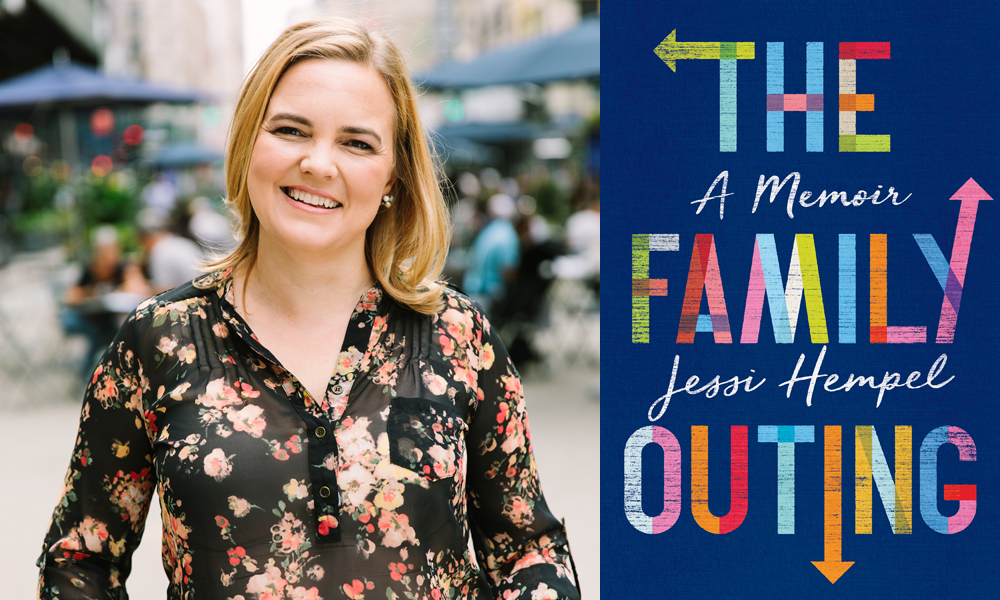 ‘A Family Outing’ Shows How Diverse Coming Out Stories Can Be

Sharing your truth can be a struggle, but Jessi Hempel’s new book argues it’s always worth it…

After her article in Time magazine about her now-brother’s pregnancy journey went viral, Hempel started to realize her family had a unique story to tell. In her new book, A Family Outing (released by Harper Collins earlier this fall), Hempel explores how coming out started a chain reaction of other personal revelations and reckonings that caused each member of the Hempel family to question their place in the world in new, and ultimately liberating, ways.

We talked to Hempel about her book, why she wanted to share her family’s story and how she thinks it can help other people in their own coming out journeys.

What made you want to tell your family’s story?

In the spring of 2020, much of North America was hunkered down in quarantine. For a couple of weeks, I was energetically Zooming with old friends, planning Zoom trivia and attending Zoom yoga. But then my energy went away. I was depressed, depleted, the days suddenly quiet. And in those quiet days, the people with whom I spoke most were my family. Quarantining in five different houses in four different states, we spoke nearly every day. I began to reflect on how odd this was. We had had a very tumultuous childhood. We’d had long periods of strained relationships. And, in the space of five years, we had all come out. I was first, coming out as a lesbian. Then my dad came out as gay. My sister revealed she was bi. My brother announced he was transgender. And through it all, my mom came out as a survivor. So I began to wonder: what happened in our family that allowed us to navigate these massive identity shifts and wind up growing closer to each other? How did our closets affect us?

Why do you think your story resonates with people?

I think there is a universal aspect to coming out, and people can sometimes see aspects of their own life experience in our family’s story, even if they don’t identify as LGBTQ+. We are all born into a set of expectations about who we will become. Our parents have dreams for us. Our communities have cultures that shape us. Then we grow and, inevitably, the most authentic expression of ourselves runs into conflict with these ideas. Coming out involves travelling the distance between other people’s expectations of us and who we know ourselves to be. And I think everyone takes this journey in one form or another. I hope this book gives people, queer or not, courage to live the most truthful versions of their own lives.

Your whole family has come out in their own way. Have you noticed any similarities between each of your experiences?

For each of us, there was a sense of alienation – before we came out, we felt there were things about us that were unknowable, that were shameful. Looking back, I wish I knew how to erase that alienation. We all stumbled into different truths about ourselves, but for each of us, finding a path to those truths helped us be more vulnerable with each other and ultimately feel more connected to each other.

How was your personal coming out experience unique?

I was the first person to come out in my family. Before I found my way out, we never spoke about gay people. In retrospect, one of our church organists was gay. My mother had a friend who was gay. But no one ever spoke about this, so I didn’t know it. This was also before Ellen DeGeneres came out on television, when I didn’t see out gay people in the media. I think this meant that it took me longer to come out than it might have otherwise. I certainly knew by the time I was in middle school that I liked girls, but I didn’t meet people who had lives that I could imagine for myself until I was in college.

Has sharing your coming out experiences brought you closer as a family? In what ways?

Yes, the conversations we had for the book definitely brought us closer to each other. There were many things we had never really talked about. My mom and I had a difficult relationship in my adolescence. We’d never seen the need to revisit it. She always knew I was upset by some things that had happened, but never really understood what had upset me. Through the process of interviewing her for the book, I also shared with her what I remembered. At the end of one particularly difficult conversation, I remember she said, “I’m so relieved!” I was kind of surprised, and asked her why. “Well, I always knew you were angry but I didn’t know what your story was. Now I do.” I think there’s a certain relief that comes from honesty. We don’t want to share things because we are afraid of how people will react, but when we finally just say the hard things, there is relief.

How do you think your mother’s experience compares to the rest of your family?

I think her experience is unique. I thought a lot while writing the book about how my dad, upon coming out, had a community that offered him support and, in time, a new social life. But there was no similar community for my mom. Perhaps she could have connected more with survivors’ groups. There were certainly no groups that she knew about for people whose spouses had come out. It was lonely for her, I think.

What kind of response did you get from the Time article about your brother’s pregnancy?

How do you think your parents’ secrets affected you and your siblings while you were growing up?

I think my parents were both unhappy. I don’t know that they even knew why. But their unhappiness had an impact on us. Dad reacted to it by travelling, and even when home, felt distant. Mom grew depressed and unpredictable. These states shaped the way we understood our own feelings as we grew, and we had to unlearn some bad patterns before we could thrive in our adulthood.

How do you think keeping secrets affects a family or relationships in general?

Not all secrets are meant to be shared. Not everyone must come out. I believe this. But many of the things that we keep secret hold power over us, and that power can be toxic. Often, we keep secrets because we are ashamed of things. And these secrets, even and maybe especially when they go unacknowledged, shape our relationships with each other.

Consider my father. He was so deeply ashamed of his homosexuality that he kept it secret even from himself. But the work of keeping that secret made him retreat from us, so he always felt distant and unreachable. Once he let go of it and began to accept himself, he showed up differently in his relationships with us. He was more emotionally present, and a lot more fun.

What does your family think about the book and their stories (and former secrets) being so public?

My family put an incredible amount of faith in me when each person gave me permission to embark upon the Project, which is what we called this book in its earliest form. After all, I’m not just sharing their stories. I’m sharing my perceptions of their stories – my point of view. Had any of the four of them written this book instead, it would have been a very different book. Everyone did this because they love me, and they knew it was important to me to try to tell this story. And I wrote this story because I believe it has the potential to help other people who are coming out, or have family members who are coming out.

It’s scary to put faith in strangers – readers – and to ask them to treat this story with the love and tenderness I have for its characters. But also, this is not a recounting of every last detail of our lives. This is one book with some important things about us that we have all chosen to share.