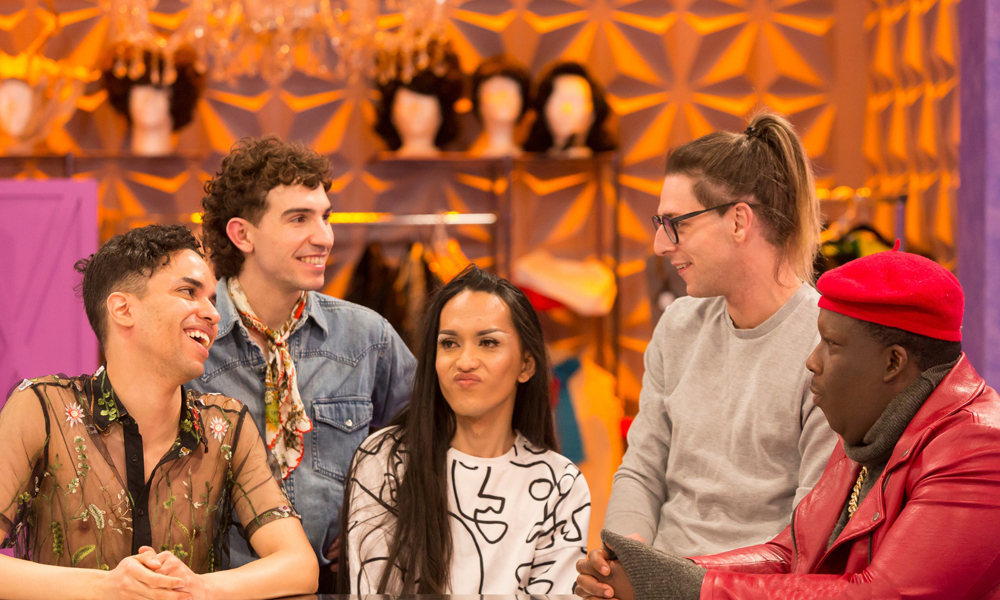 Last week we said goodbye to east coast queen Irma Gerd after the queens made their Rusical debut in Squirrel’s Trip. Irma was in the bottom two with Gisèle Lullaby and after a passionate lip sync Brooke and the other judges chose to give Gisèle another chance. Vivian Vanderpuss was named the top queen of the week for her breakout performance on the stage. This week the remaining five queens are throwing a ball on the mainstage, which means another sewing challenge, which also means there will inevitably be one or two gowns held together with hot glue. Let’s get into it!

This week’s episode begins in the werk room following Irma’s elimination. Vivian is feeling bittersweet about her win when her good sis has been eliminated. Over on the couches the queens tell Gisèle that she killed her lip sync and everyone congratulates Vivian on winning the challenge. Vivian tells the other queens that she’s the only queen left who hasn’t had to lip sync. It’s a new day in the werk room and Gisèle is feeling…exhausted. Around the table all of the queens are feeling the pain from Hollywood Jade’s intense choreography from the Rusical. Ru interrupts with a video message about drag revealing who we really are.

Brad enters the room and gives the queens some video messages from loved ones back home and everybody gets emotional. After the video messages Brad tells the queens that for this week’s maxi challenge there will be a masquerade BALL. The categories are Masc For Mascara, In-Cog-SHEdo, and finally the queens will have to design and construct an elegant garment to go with masks. Since Vivian won the main challenge last week, she will get to assign the masks to the queens.

Everybody gets to designing their outfits. Gisèle and Vivian are the only seamstresses left, while the remaining three are all hot glue gun girlies. Kimmy is feeling optimistic since she was in the top with a glued-together look during the last sewing challenge. Fierce and Jada are trying their very best with the sewing machine, and Gisèle is helping just about everyone. Brad comes back into the werk room to check on everybody’s progress. Gisèle accidentally melts the lining of her gown with a steamer, and Jada accidentally sews the top of her dress closed.

It’s elimination day and the queens get ready while putting the finishing touches on their lewks. Over at the makeup mirrors everybody talks about the importance of learning queer culture and queer history. The queens move onto an important conversation about consent and Kimmy opens up to the other queens about her history with sexually assault. All of the queens listen to her and a few even talk about their own similar experiences. Out on the main stage Brooke introduces this week’s panel of judges Traci, Brad, and this week’s extra special guest fashion designer and model Lesley Hampton.

On the runway the first category is Masc for Mascara and the queens strut down the runway while they butch it up with gender-bending lewks. The next category is In-Cog-Shedo and the queens wow in transformative reveal looks. And finally, the queens show off their designing skills with their masquerade looks. Even the hot glue gun girls did a great job with their gowns. Critiques begin with Gisèle. The judges love that she gave three different lewks on the runway this week, and love her designed look but clock her on the unfinished hem. Brad tells Kimmy she was proud of her for wearing pants in her first lewk and give her props for wearing a beard in the first category but her second lewk fell short and they didn’t love her paper feathers. Brad tells Fierce that she gave true versatility, and all of the judges are impressed with her attention to detail with her final dress. Traci tells Vivian that she loves her fusion of vintage and modern, and Brooke tells her that she’d love to see her be a little more serious on the runway. The judges appreciated the construction of her pants on her final look, but wished there was a little more. Finally, the judges tell Jada she showed three different sides of her this week. Brad tells her she did a really good job with her final look. Brooke tells the queens that this is the final challenge before the finale. WHAT?

The queens untuck backstage and while Giséle congratulates Jada and Fierce on their looks, Jada and Fierce get into a bit of a fight. Vivian thinks she’s for sure in the bottom this week, and Kimmy is also not feeling great about her critiques, too. Following deliberations, Brooke announces that the winner of this week’s challenge is Miss Fiercalicious. Gisèle and Jada Shada Hudson are both safe for the week, which leaves Kimmy Couture and Vivian Vanderpuss to lip sync for their lives. The two bottom queens lip sync to “Ctrl+Alt+Delete” by Rêve. Both queens give high-energy performances. In the end Brooke and the judges choose to send Kimmy Couture to the finale, and it’s the end of the road for Vivian.

Next week on Canada’s Drag Race: It’s the finale! The queens will write and record their own verses, learn even more choreography with Hollywood Jade, and a new queen of the north is crowned.