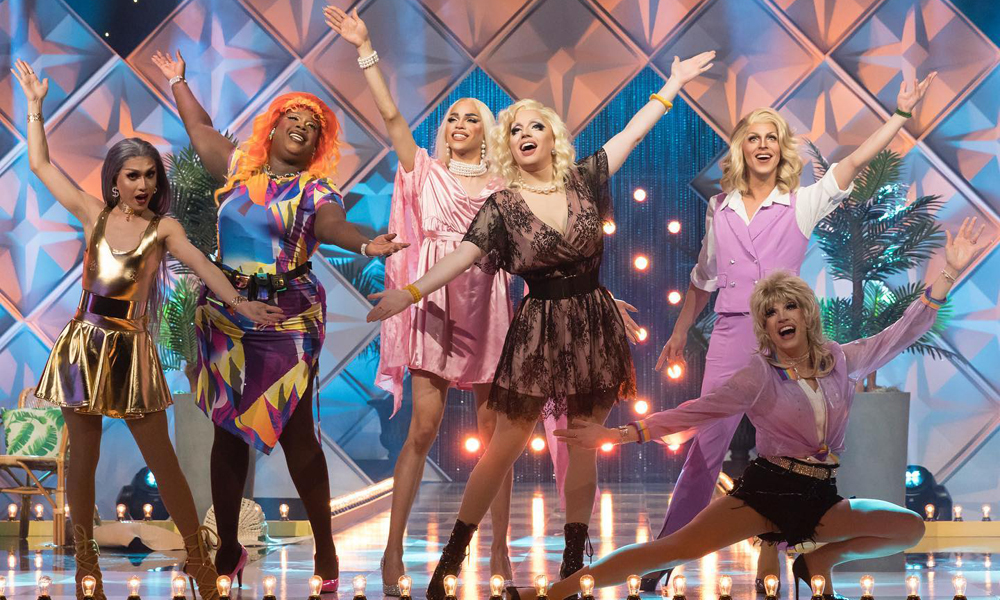 Last week we said goodbye to Bombae after a creative marketing challenge saw the queens making their own eyeshadow palettes and filming commercials for them. Top queen of the week went to Miss Fiercalicious who had the challenge in the bag right from the start. This week the remaining queens will make their Rusical debuts! Let’s jump in.

This week’s episode begins in the werk room following Bombae’s elimination. Irma is feeling good about winning the lip sync for her life. She reads Bombae’s message on the mirror and wipes it away. Over on the couches the other queens lightly roast Irma’s dancing in the lip sync. The queens congratulate Fierce on her win, but nobody is singing Fierce’s praise as much as Fierce. Vivian is disappointed that she has yet to secure a win. Will it be her week?

It’s a new day in the werk room and the remaining six queens make their way to the table. They take a quick tally on how many wins everyone has. Irma and Vivian are the last two without a win. Ru interrupts with a video message and Brad enters the werk room to deliver this weeks challenges. For this week’s mini challenge the queens will get into “actress quick drag” and memorize a script and audition for a role in a new superhero movie Superqueens. After some truly moving performances Brad announces the winner of the mini challenge is Kimmy Couture. Brad tells the queens that for this week’s maxi challenge the queens will be performing in Girls Trip: The Rusical! The queens will record vocals with Brad, learn choreography with Hollywood Jade, but it’s up to the queens to assign the roles. They gather on the couches to listen to the tracks and read the script together before deciding roles. A couple of the queens battle it out for the lead role, but the parts are all assigned without any drama. They divide into groups with their scene partners and learn their songs and scripts. Then they head out to the main stage which has turned into a makeshift music studio to record their vocals with Brad. For the most part the recording goes pretty well, even with the queens who aren’t strong singers.

Following the recording session the queens get down to business for dance rehearsals with Hollywood Jade who did not come to play with the choreography. Some of the queens pick up the steps fast while others have a tougher time.

It’s elimination day and the queens are busy getting ready for their Rusical debuts. They talk about high school experiences and sex with ghosts (it came out of nowhere). Out on the main stage Brooke introduces this week’s panel of judges Brad, Traci and this week’s extra special guest Jeremy Dutcher.

It’s time for the Rusical. It goes pretty well and all of the queens perform their songs and dances without any major missteps. Following the Rusical the category on the runway is “Dystopian Drag” and the queens turn up and turn out in their best apocalyptic and futuristic lewks. After the runway it’s time for critiques which start with Jada. Brad tells her she was smart to choose that role and that she did a good job opening the show but the judges agreed she could have gone bigger. The judges loved Fierce’s performance in the musical and runway look. Traci tells Vivian her choreo was incredible and Brooke tells her she nailed her look (which includes some of her real baby teeth). The judges tell Kimmy her look is great but it is once again another bra and panty set. But they did like her Rusical performance a lot. The judges clock Irma on her unnecessary reveal on the runway and say her performance in the musical fell a little short. Finally, the judges call Gisèle’s look “to die for, but Brooke says she kind of faded into the background of the Rusical.

Backstage while the queens untuck they talk about who they think might be lip syncing this week. Following the judges deliberations Brooke announces that Vivian is this week’s winner! Kimmy, Miss Fiercalicious, and Jada Shada Hudson are all safe for the week. In the bottom this week are Irma Gerd and Gisèle Lullaby. The two bottoms lip sync for their lives to “Love Is” by Allanah Myles. Both queens give the lip sync their all and it’s clear neither one of them are ready to go home yet. After the lip sync Brooke chooses to save Gisèle to slay another day, while Irma Gerd sashays away as it’s the end of the road for her.

Next week on Canada’s Drag Race: It’s finally time for the queens to throw A BALL.