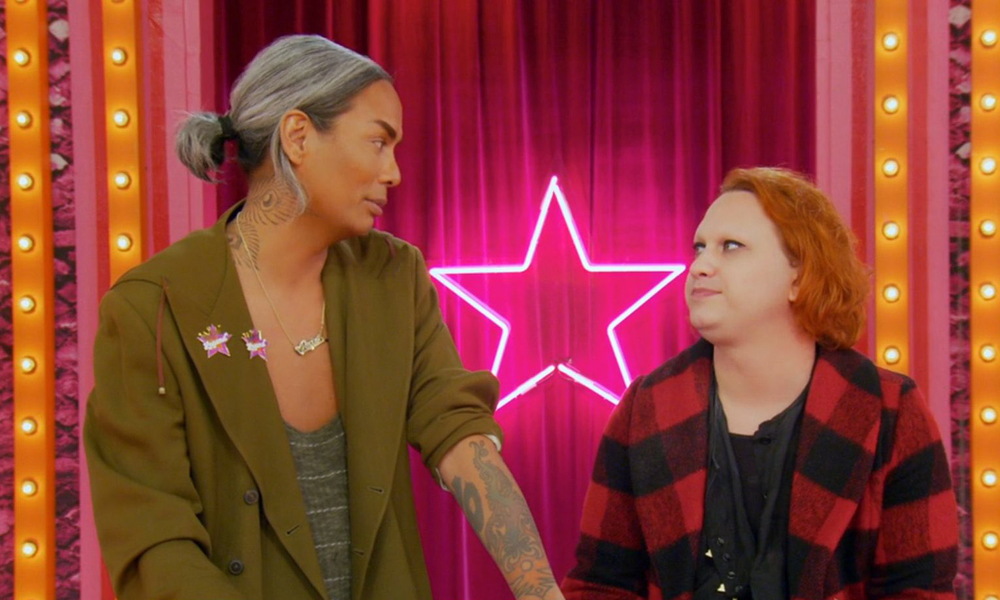 Last week the queens competed in an over-acting challenge with a cult-classic holiday slasher. After all of them delivered bone-chilling performances, Ru announced that the top two queens of the week were The Vivienne and Raja. After their lip sync, the winner of the week was Raja, and she chose to use her plunger power to block Jaida Essence Hall (who currently has three stars). This week the queens will be creating their own viral social media dance challenges. Let’s get into it.

This week’s episode begins with all of the queens walking into the werk room following Jaida’s blocking. Raja and Viv are both feeling good about coming out on top. Over on the couches, the rest of the queens congratulate them on their lip sync and star pins. Jaida enters the room with the platinum plunger looking sad. Raja says she chose Jaida because she has the most stars. Jaida says being blocked feels shitty, but she decides to keep the plunger gag going. At this point everybody BUT Raja has been blocked, meaning everybody BUT Raja knows that there’s not actually a secret power that comes with the plunger, but it’s fun to keep the joke alive. The queens take a quick tally of stars. Monét and Shea are the only queens who have a single star. The finish line is quickly approaching and the pressure to get to the finale is getting more intense.

The next day in the werk room everybody enters and gathers around the table and are quickly interrupted. Ru announces that this week’s maxi challenge is a masterclass in branding. The queens will have to create their own viral dance routines to a song from Ru’s legendary library. The queens sit together on the couches to brainstorm their dances. They’re all kind of helping each other out with ideas and what their individual brands are. Some of the queens are admittedly not strong dancers, but they’re taking what they do well to put into their dance. Yvie who isn’t familiar with TikTok dance trends, is struggling a little to come up with a concept. On the other side of the werk room Jinkx stuffs an entire sandwich into her mouth and cannot stop giggling which has Raja confused but it’s all part of her peanut butter and jelly plan. Ru wanders back into the werk room to check on what everybody has been working on. Most of the queens already have a solid brand which makes coming up with their ideas easy.

After some careful planning, the queens head over to a studio to film their viral videos. It’s runway day, and as everybody is getting ready to walk the runway and see their dance challenges for the first time. Jinkx is a little worried that her video didn’t have much of a dance, but feels confident that people will like it. She and Trinity privately talk about what winning this week’s challenge will mean for the star count. Out on the main stage Ru introduces this week’s judges Michelle, Carson, and this week’s extra special guest judge, actor and singer Ben Platt.

On the runway the category is “what lies beneath”, and the queens strut down the runway in stunning looks with reveal after reveal. The critiques start with Shea. Michelle thought her dance was fun and wanted to learn how to do it. Carson loved her reveal look. Michelle loved how funny her dance was. Carson and Ben both loved that all four of her reveals were full length gowns. The judges tell The Vivienne she did a great job branding. Ben loves her musical-inspired reveal outfits. Carson loved how on-brand Rajas dance was and Michelle applauded how beautiful her runway reveal was. Ben appreciated all of the references in Yvie’s dance video and Carson and Michelle both love her runway look and makeup. Jinkx’s peanut butter scheme came through and all of the judges loved how comedic her video was as well as the artfulness of her reveal looks. Michelle says Monéts dance could totallybecome a real thing, and everybody applauds her runway concept with a powerful message. Finally the judges say Trinity’s video was so funny and totally her. Michelle loves her burlesque-inspired runway look.

Following deliberations, Ru announces that the top two all stars of the week are Jinkx and Monét who have also both earned a legendary legend star. The two top queens lip sync for their legacy to a monologue from a Designing Women scene (A Drag Race first).

After both queens give their all to a spoken word piece and Ru decides that the top all star of the week is Monét X Change. Monét has won a cash tip and the power to block. Monét uses the platinum plunger to block Raja from earning a legendary legend star. Raja is the last queen to receive the plunger, which also means she will soon know all of the secrets the plunger holds.

On the next episode of All Stars: The queens will take turns roasting each other and the competition heats up as the finale inches closer.