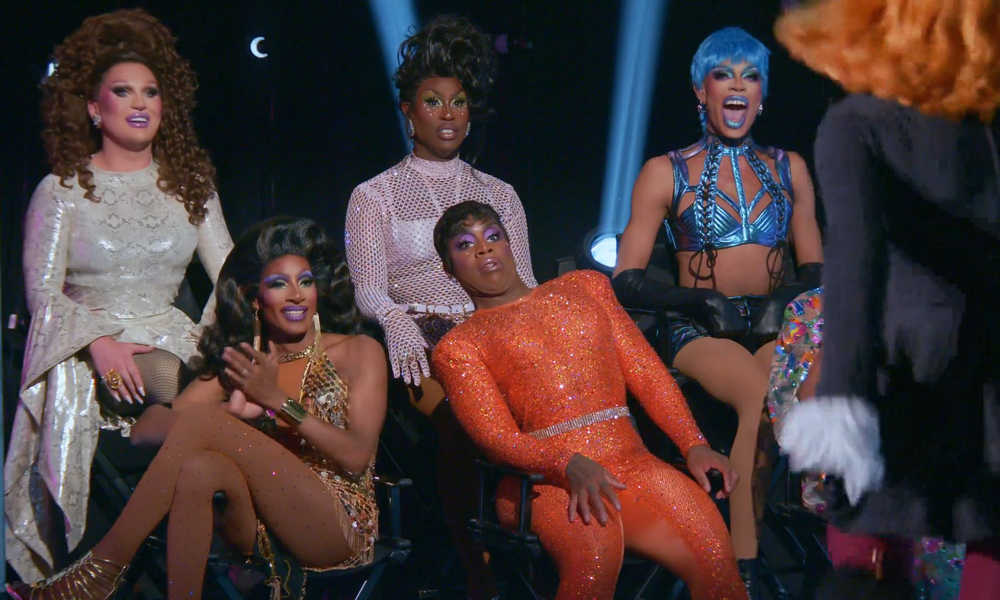 The queens roast each other on the main stage before showing us how far they can glow with light-up lewks on the runway. Author and journalist Rownan Farrow is a guest judge

Last week the queens created their own signature social media dance challenge, and the race was on for another star pin. Jinkx and Monét came out on top with their dances, but Monét took the top spot after a spoken word lip sync. After the lip sync Monét passed the golden plunger to Raja. This week everyone will deliver a roasty toasty speech and Raja will finally know the secret of the platinum plunger.

This week’s episode begins in the werk room following Raja’s blocking. Monét is thrilled to have joined the multiple star club and the rest of the queens congratulate her over on the couches. Raja enters the room with her plunger and no secret. Raja tells the other queens that she’s so mad at them for fooling her into thinking there was a secret power that came with it. Trinity brings up that there are two queens with three stars (Jada and Jinkx), though Jinkx has won four challenges. Shea is feeling lonely at the bottom with her singular star, but there is still two challenges for her to catch up before the finale.

It’s a new day and the queens enter the werk room antsy to snatch another star. Ru’s video message is interrupted by one Miss Kennedy Davenport who says the inductees are being announced for this year’s Kennedy Davenport Center Honors ceremony. Ru enters the room and announces that each of the queens have been selected as inductees and will take turns roasting each other on the main stage. To decide the performing order of the roast the queens will put their thrust and trust into the hands of a drag god. The queens will pick a balloon and pop it against a pit crew member. The confetti inside the balloon will indicate what order they go in. After all of the balloons have been popped and the order has been decided the queens get down to writing their roasts and jokes. Jinkx isn’t nervous at all since this is what she does best. The Vivienne has already proven she’s a comedienne supreme, but is still a little worried that her sense of humour might be “too British” for Americans. Jaida is struggling a little to write her jokes, and Shea is feeling the pressure to get another star and get to the finale. Yvie and Jaida both haven’t done roasts before. Monét won the roast on AS4, so she’s feeling good about this one, but Trinity is worried since she hasn’t performed well in roast challenges in the past, and although she’s off-the-cuff funny, she fears it won’t translate to a punchline. Jinkx tells Trinity she’d like to return the favour from the first sewing challenge and offers to help workshop her jokes. The queens head out to the main stage to workshop their roasts with Ross and comedian Soloman Georgio. Most of the queens are already killing it with their roast jokes (and some of them are downright harsh). Some queens need a little help from Ross and Soloman, but it doesn’t sound like any of them will bomb.

It’s roast day and as the queens get ready they’re excited to see what shady jokes the other queens have come up with. Twinners Trinity and Monét take a moment in the corner to discuss blocking strategy, which isn’t much of a secret to literally any of the other queens. Out on the main stage Ru introduces this week’s panel of judges Michelle, Ross, and this week’s extra special guest, author and journalist Ronan Farrow.

It’s time for the roast, and Wintergreen (Peppermint’s drag daughter and RPDR camera operator) opens the show. Raja is the first honoree, and lands some pretty good jokes right out of the gate. Yvie is next and she also does a great job. Shea follows Yvie and she also lands all of her jokes. Jinkx is next and gets a bunch of laughs right away and continues to get them too. Trinity goes next and the judges all love her jokes, so she broke her curse from the last two roasts she did. Monét goes next and, as expected, she does well. Jaida Essence Hall, she stumbles a little through her joke, but she roasts herself a little which gets some laughs. Finally, The Viv closes out the roast and kills all of her jokes. After the roast the category on the runway is “All Glowed Up ” and the queens make their way down the runway in show stopping light-up looks.

Before the critiques begin Ru tells the queens that the All Stars All Winners rules are about to be revised. Tonight Ru will announce the top two queens of the week and they’ll get a star (unless they’re blocked) as usual. Changing this week, the platinum plunger will no longer be used to block other queens. The critiques begin with Raja. Michelle tells her she was probably the meanest, but her jokes were funny. Michelle tells Yvie she was lower key but she really liked the vibe she brought to the roast. Ross loves her mushroom gown. The judges tell Shea that they loved how she carried herself in the roast in her power suit. Ross loves her light-up sunflower look on the runway. Michelle tells Jinkx she had really funny jokes and that she did not disappoint. Ronan loves her witches burned at the stake lewk. Michelle tells Trinity her look is glowy and fun, and tells her that her roast was freaking hilarious. Ru tells her that she’s in her element. Ross tells her she was fun to watch because she’s so confident on stage. The judges love Jaida’s mermaid gown, but tell her that even though she struggled she really came to life when she went off-book during the roast. Finally, the judges tell Viv they always feel her confidence when she performs and that her runway look was absolutely stunning.

Following deliberations Ru announces that the top two queens of the week are Trinity the Tuck and Jinkx Monsoon! The two top queens have earned another legendary legend star and are one step closer to the grand finale lip sync smackdown. But first they need to get through this one lip sync for their legacy. Jinkx and Trinity give it their all to Kings and Queens by Ava Max. After an electric performance Ru gives the top spot of the week to Jinkx Monsoon.

Next week on All Stars: It’s the final challenge before the grand finale and the last chance to score a legendary legend star in a variety show extravaganza.