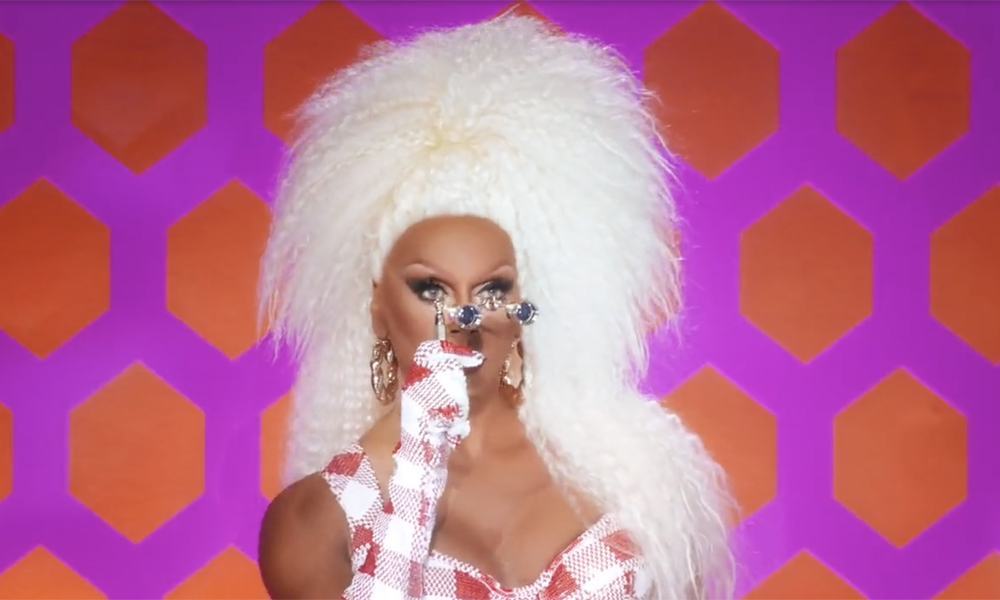 We’ve finally made it to the last episode of All Stars 7 before the lip sync showdown for the crown. Last week the queens wrote roasty speeches for the Kennedy Davenport Center Honor Awards.Jinkx Monsoon and Trinity the Tuck came out on top with their performances. Last week Ru also retired the blocking rule for the remainder of the season. Jinkx won the lip sync, but both queens walked away with an additional Legendary Legend star. This week the queens will have one last chance to get their stars o earn a spot in tnext week’s finale lip sync extravaganza. Let’s get into it!

This week’s episode begins in the werk room Jinkx is feeling good about winning her fifth challenge of the season and the rest of the queens congratulate her and Trinity on their roast win. Trinity is feeling proud of herself for winning a roast and the rest of the queens talk about how everyone has an (almost) fair chance at getting to the finale (even the girlies with one star *wink*). Shea is feeling the pressure to make sure she has a spot in the finale, but it’s Drag Race and as  we know… anything can still happen. It’s a new day in the werk room and the queens are feeling ready to take on their last maxi challenge of the season. Ru enters and tells the queens that they’re all winners no matter what happens next. HOWEVER, this week’s challenge will determine which four queens make it to the finale. The queens will have to use every last ounce of their charisma, uniqueness, nerve, and talent to put on an epic performance in a charitable variety show. This week the winner of the lip sync will also receive a $30,000 donation to the charity of their choice as well as THREE LEGENDARY LEGEND STARS. Later on the queens will sit down with Michelle and Ru for a Tic Tac chat.

The queens get to work on their lewks and talents. Shea is finally feeling hopeful that she might still be able to make it to the finale. Trinity is the first queen to sit down with Ru and Michelle. She talks about how Drag Race has changed her life and how blown away she is competing with so many legends. Trinity has chosen Planned Parenthood as her charity, which is so important especially now. The Vivenne is next and talks about how it’s been being around all of the American queens she watched on the telly. Viv feels proud of what she’s accomplished on the show, and has chosen Trans Lifeline as her charity. Back in the werk room Monét tells the other queens she’s performing opera. Out on the main stage with Ru and Michelle she talks about how much her confidence has changed since being on the show. Monét has chosen Color of Change as her charity. Yvie is out next and Michelle tells her she is so thankful she got to see what else she had up her sleeve this season. Yvie has chosen the National Coalition Against Domestic Violence as the charity she is performing for. Yvie gives an update on her health condition and says it’s hard to notice the skills she’s starting to lose, like being able to stand in heels for example.

Shea is up next and tells Ru and Michelle she was energized by the triple star announcement. Shea has Period Poverty Project as her charity of choice. Raja tells Michelle and Ru that she still has the real Tic Tac from their chat on season three. She talks about her youth growing up in the church and how much her family’s support means to her. Raja has chosen the National Center for Trans Equality as her charity. Jinkx is next and Ru compliments her on how well she’s done this time around. Jinkx says she’s proud of her performance in every challenge. Jinkx talks about how being sober has helped her come out of her shell and excel as an artist. Jinkx has chosen the Black Visions Collective as her charity for the variety show. Finally Jaida is on the main stage and tells Ru and Michelle that coming back so soon has been a gift because she didn’t have to take everything so seriously which has taught her so much about what she can do. Jaida has chosen Free Black Therapy as her charity.

It’s runway day and the queens enter the werk room ready to slay their last maxi challenge of the competition. As everyone prepares for their performance and everyone is ready to pull out all of the stops to guarantee a spot in the finale. Out on the main stage Ru introduces this week’s panel of judges Michelle, Carson, and from Hacks, actress  Hannah Einbinder. The first variety show performer is Trinity the Tuck performing an original song all about her southern charm that ended with a sweet tea shower. Yvie Oddly is next and lets her body do all of the talking. Jaida Essence Hall also performs an original song. Jinkx too performs a song that’s also part comedy routine, but she’s actually singing it live and all of the judges get a kick out of it. Shea Coulee performs an original song that was good enough for mainstream radio play, and Raja takes to the stage to perform a traditional Balinese dance. It’s different from all of the other performances which will for sure make it stand out. The Vivienne performs an original song that Ru seems to get really into. Finally, Monét sings opera and blows everyone away.

After the judges deliberate Ru announces that the top two all stars of the week are Monét X Change and Shea Couleé. They’ve both earned three legendary legend stars. Ru asks Monét, Jinkx, and Shea, and tells them that they have qualified for the finale lip sync smackdown. BUT there’s a tie for the fourth spot between Jaida Essence Hall and Trinity the Tuck. Monét has earned the most starts (five). Ru tells her to break the tie, she must decide which one of them will be going to the lip sync. Monét of course picks her twinner Trinity the Tuck. The top two all stars of the week lip sync for charity to “Supernova” by Kylie Minogue. Both queens give it their all in an electric performance.

Ru chooses Shea Couleé as the winner, meaning $30,000 will be donated to the Period Povery Project. Ru also announces that everyone else’s charities will receive a donation of $10,000. All of the queens join Monét and Shea on the main stage. The Vivienne, Raja, Yvie, and Jaida did not qualify for the final lip sync for the crown. Next week they will compete in a separate lip sync smackdown for the chance to win $50,000. Not bad for the runners up.

Next week on All Stars: Not one, but TWO winners will be crowned after a lip sync extravaganza.