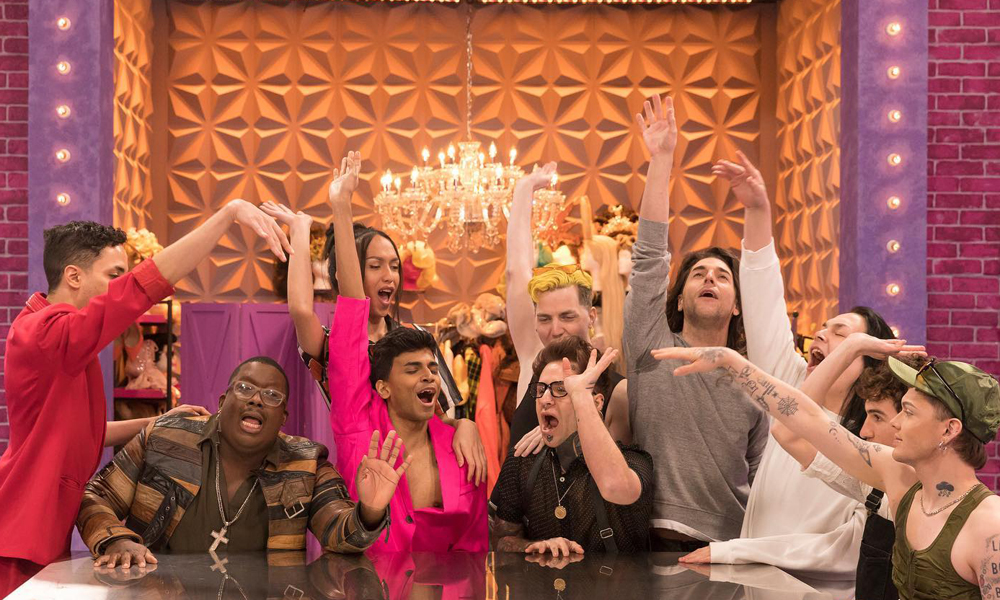 The queens lip sync for their lives in pairs to iconic RuPaul duets. Vanessa Vanjie Mateo and Hollywood Jade are guest judges…

Last week we said goodbye to Toronto’s own Miss Moço after the queens lightly roasted each other at a totally made up awards show which landed her and Jada Shada Hudson in the bottom. After Miss Fiercalicious and Kimmy Couture had a rocky start to their partnership in the werk room, their banter came out on top and Kimmy won the main challenge. This week the queens will lip sync in pairs with not one, but two extra special guests on the judging panel. Let’s get into it!

This week’s episode begins in the werk room following Miss Moço’s elimination. The queens read her goodbye message on the mirror before Jada wipes it away. The queens gather on the couches and discuss the fact that two Toronto queens have already gone home. Everyone congratulates Kimmy on her win and get out of drag. The competition is heating up and none of the other Toronto queens want to be the next to go home. It’s a new day in the werk room and the remaining queens enter ready to take on a new challenge. Fierce is feeling confident and Kaos is feeling…burpy. Ru’s video message interrupts their conversation with riddles about being a dynamic duo. Brooke enters the werk room and starts talking about how tough dating can be because for this week’s mini challenge the queens have to get into quick daddy drag and go on a candlelit date with Brooke with the goal of making her laugh. The dates are all nightmares but most of them made her laugh. Brooke announces the winner of the mini challenge is Vivian Vanderpuss (who was absolutely hilarious).

Brooke then announces the main challenge of the week. This week the queens will have to lip sync for their lives… in PAIRS. They’ll have to work together to create dynamic routines to duets by Rupaul. The queens pair up and since Vivian is the winner of the mini challenge she gets to choose the songs for each pair. Over on the couches the group tries to distribute the songs as fairly as possible. Miss Fiercalicious and Bombae get the “worst” song of the group AND THEY ARE PISSED. The pairs disperse to work on their performances. Kimmy and Boom Boom are feeling good about their connection. Jada and Irma are playing on their opposite energy to make their performance funny. Kaos and Chelazon both want to get out of their heads and have fun with their lip sync. The two of them bond over their shared Indigenous heritage. Gisèle and Vivian are vibing but Viv can feel Fierce’s daggers shooting her way (which Bombae isn’t loving). Out on the main stage the queens are met with Brooke who welcomes her “Ruet partner forever” Vanessa Vanjie Mateo #Branjie4Ever. All of the pairs rehearse for Brooke and Vanjie and get some constructive feedback from the both of them.

It’s elimination day in the werk room and the queens are ready and feeling confident about their performances. They talk about their partners back home. Fierce apologizes to Viv for being “a little bit dramatic”, but Gisèle GOES OFF and says she won’t tolerate bullying in their sisterhood. Out on the main stage Brooke introduces this week’s judging panel Traci, and this week’s extra special guests choreographer Hollywood Jade, and Vanjie. The first pair out on the stage are Chelazon and Kaos with Adrenaline. they have good chemistry but the performance was on the basic side and lacked a little bit of energy. Next up is Kimmy and Lady Boom Boom who come out with a bang. Their performance is full of energy and it’s clear they work really well with each other. Next is Bombae and Fierce who make the most of their slow jam and turn it out with a story. Jada and Irma are out next with their Peanut Butter performance. It’s full of energy and character. Finally Gisèle and Vivian who give a funky disco inspired routine. Following the performances the category on the runway is “sleeves” and the queens take turns strutting in their best and most dramatic sleeved lewks.

Based on the performances and runway Brooke calls Jada, Irma, Kimmy, and Lady Boom Boom forward and tellsl them that they all represent the tops this week. Jada is the winner of this week’s maxi challenge. Critiques begin with Fierce. Brooke says some moments were really enjoyable but others that were just not fun to watch. Brooke tells Bombae that there were good moments, but Hollywood Jade says they stopped lip syncing during parts of their song. The judges tell Chelazon that she ended stronger in her performance, but there just wasn’t a lot of adrenaline. And the judges tell Kaos that her performance lacked some fire. The judges enjoyed Vivian’s performance but she sometimes got lost in the choreography, but they love her tiny-hands look. Finally the judges tell Giséle that her performance was alright, and a lot of the dancing did compliment both queens but it could have been bigger. Backstage Chelazon breaks down over her critiques, and the other queens comfort her.

Following deliberations Brooke announces that Viv, Giséle, Bomabe, and Kaos are all safe for the week leaving Chelazon and Miss Fiercalicious in the bottom and having to lip sync for their lives. The two bottom queens perform to “Don’t Call Me Baby” by Kreesha Turner. Both queens give a passionate performance to this absolute jam I totally forgot about. Brooke announces that Miss Fiercalicious will stay for another week, meaning Chelazon Leroux is the third queen to be eliminated this season.