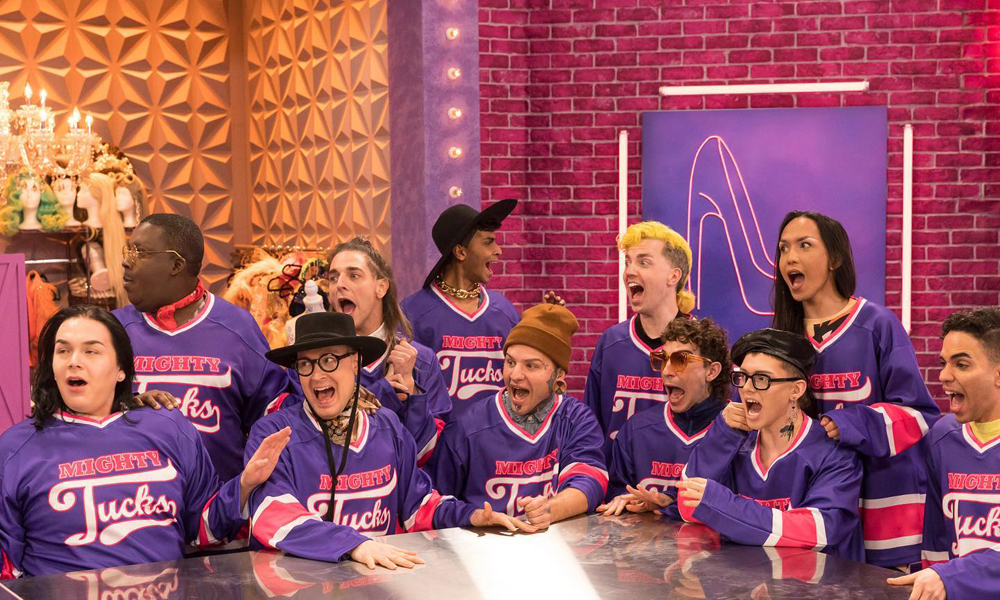 The queens flex their comedy chops when they present awards at the Who Knows, and Canadian music icon Carole Pope is a guest

Last week we met a whole new group of Canadian queens representing the best our true, north, strong, and fierce drag has to offer. After a streetwear mini challenge and a couture sewing maxi challenge the bottom two queens of the week were Miss Moço and Halal Bae, and after a passionate lip sync to a Justin Bieber song, Halal Bae became the first queen to be eliminated this season. This week the queens will star as presenters and nominees at an awards show. Let’s get into it.

This week’s episode begins in the werk room following Halal’s elimination. Miss Moço reads her goodbye message on the mirror. Bombae is feeling the loss the most as she’s not only lost her mother, but also her closest friend in the competition. Miss Moço says she has a fire under her ass now, and she doesn’t want to be in the bottom again. Over on the couches, the queens congratulate Lady Boom Boom on winning the first maxi challenge of the season. The next day the queens enter the werk room ready for another challenge and another chance to be at the top. Everybody is feeling grateful that one of the design challenges are out of the way, and they’re hoping that they’ll be able to shine. They notice a duffle bag on a makeup station and look inside. It’s hockey jerseys and there’s one for each of them. Ru interrupts with a video message and Brad enters the room to tell the queens all about this week’s challenge. Brad is auditioning for his new hockey team The Mighty Tucks. For this week’s mini challenge the queens must get into quick drag using hockey bags to come up with a gameworthy look. After a quick fashion show Brad announces that the winner of the mini challenge is Chelazon! Brad then tells the queens that it’s officially awards season, and everyone is invited to the Who-Knows. The queens will work in groups and come up with funny award show banter. Since Chelazon won the mini challenge, she gets to choose all of the groups. After the pairs and single trio are selected, Brad distributes the categories to each group. All of the queens will vote on the winners, but we won’t find out until it’s show time.

Everyone gets to work in their groups writing their jokes. Miss Moço and Jada host shows together all of the time, so they’re feeling like they’ve got this in the bag. Miss Fiercalicious and Kimmy Couture are struggling a little in the writing stage. The flow and teamwork is pretty good in all of the groups except one (Kimmy and Miss Fierce). They’re stressing each other out and it’s pretty clear they’re not on the same page. Is this season’s first feud already in the works? Brad interrupts and talks to each group about their progress with their joke writing. A lot of the queens are nervous about a comedy challenge, but the material a lot of them have is already pretty good. It’s elimination day and the queens are getting ready for their Who-Knows debut. They talk about where their sense of humour stems from. Chelazon talks about how important laughter and humour is as an Indigenous person, and speaks about the acceptance of queer people in Indegnous communities. Fierce and Kimmy fight about their lines while doing their makeup and the other queens notice.

Out on the main stage Brooke introduces the panel of judges Brad, Traci, and this week’s extra special guest, Canadian music icon Carole Pope. The Who-Knows begins with the trio group and they do a good job with their jokes. With all of the groups It’s a real mix of jokes that land and crickets, but it’s a tough job with only 20 people in the audience. Surprisingly Kimmy and Fierce get a lot of laughs with their jokes.

On the runway the category is “Goddesses of the Ancient World” and the queens take turns walking the runway in gorgeous ethereal lewks. Based on the maxi challenge and runway, Bombae, Gisele , Lady Boom Boom, Kaos, and Vivienne are all safe for the week. The rest of the queens are the tops and bottoms of the week.

Critiques start with Miss Moço and the judges all love her runway look and presentation, Brooke tells her the delivery of the jokes on stage weren’t good which also shocks the rest of the judges. Jada receives the same critiques about her performance in the maxi challenge and the judges reassure her that she just has to be herself. The judges tell Chelazon that she did an incredible job during the award show. They tell her that her runway was beautiful but it’s been giving the same vibe since the first challenge. The judges tell Kimmy her runway look is breathtaking and gorgeous. Brooke says she was worried about her and Fierce in the challenge, but they were actually really funny. The judges tell Miss Fiercalicious that her look was Met Gala worthy. Traci tells Irma Gerd that her award show moment was a rollercoaster (not a good one), and Brooke tells her that her runway wasn’t clear enough. Backstage the queens chat about their critiques. Jada breaks down in tears over the disappointment of her performance of the week and Miss Moço feels terrible that it could be her fault why she’s in the bottom.

Following deliberations, Brooke announces that the top queen of the week is Kimmy Couture. Chelazon, Miss Fiercalicious, and Irma are all safe for the week, meaning Miss Moço and Jada Shada Hudson are the two bottom queens of the week. They lip sync for their lives to High School Confidential by Rough Trade. Both queens deliver a passionate performance and it’s clear they both want to stay in the competition. After the lip sync, Jada is saved to slay another week and it’s Miss Moço who is the second queen to be eliminated this season.

Next week on Canada’s Drag Race: The queens lip sync for their lives in pairs, Miss Vanjie and Hollywood Jade make a guest appearance, and tensions rise in the werk room.