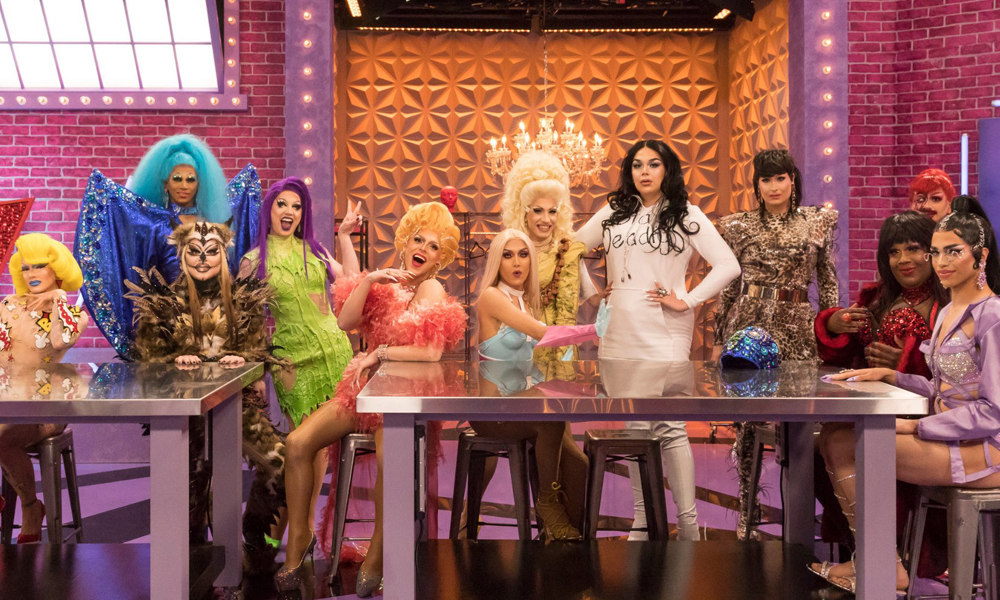 Back in December Canada crowned Icesis Couture as the new Queen of the North, and it’s already time to meet another group of the country’s best from our diverse drag scene. This season queens from coast to coast will wow the judges with their looks and performances in challenges before a new queen is crowned. This week we’ll get to meet our new Canadian queens, so let’s jump right in.

First in the werk room is Bombae from Toronto (by way of Mumbai). She’s a mix of a supermodel and a club kid and promises to bring the chaos this season. Next in is Kimmy Couture from Ottawa and she says she’s here to break the Asian curse. Kimmy is Icesis’s drag daughter so the pressure is ON. Chelazon Leroux from Treaty 6 territory Saskatoon, and she is here to be unapologetically Indigenous. Next is Jada Shada Hudson from Toronto (by way of Barbados). Next in is Miss Moço, who is also from Toronto. She came in with a bang and a wig reveal. She’s bringing fashion, beauty, and comedy this season. Next in is Gisèle Lullaby from Montreal looking like a dream in pink. Gisèle actually started as a backup dancer for Rita Baga. Kaos from Calgary is next and she promises to deliver a whole different side of drag to the show. Next to enter the work room is Miss Fiercalicious from Toronto, and she’s serving looks hunny. Like Chelazon, Miss Fiercalicious  is also a TikTok queen. Vivian Vanderpuss from Victoria is next and she’s bringing old Hollywood camp to the competition this season. Lady Boom Boom from Montreal also enters the werk room and brings tiny doll realness with her. Irma Gerd from St. John’s enters in an ooey gooey look and is known for being wild and unpredictable.  Halal Bae from Toronto is the final queen to make her way into the werk room in a meaty gown. Her drag is known for props and a storyline, which is totally evident from her entrance look. Halal and Bombae are mother and daughter, making this a drag family reunion. Miss Moço says she heard Halal and Jada have hooked up, which means there’s another reunion happening this season, too.

After brief introductions, the queens are interrupted by a video message from RuPaul that includes a bunch of great lake puns. Brooke Lynn Hytes enters the werk room and welcomes all of her nieces to the competition. Brad and Traci also enter the werk room and the competition is officially on. For this season’s first challenge the queens are taking part in a rooftop fashion show. The queens make their way down the runway in stunning Canadian-inspired streetwear looks. Following the mini challenge Traci announces the queen with the winning look is Bombae. Now it’s time for this week’s maxi challenge. The queens will have to construct new couture looks for their main stage debut USING THE CLOTHES THEY’RE ALREADY WEARING. The queens get to work getting out of drag and tearing their outfits apart. Bombae is a seamstress, and she has a lot of fabric to work with while Lady Boom Boom outs herself as a seamstress and the queens quickly flock to her for advice. Over by the sewing machines some of the girls are talking about Chelazon Leroux and how she got her following on TikTok.

Everyone is constructing their new looks and Miss Fiercalicous is having some trouble coming up with a concept and threading her machine. Most of the queens help each other out with the finishing touches on their looks. It’s elimination day and the queens are busy making sure their runway debut outfits are just right. The queens revel in the fact that a lot of the queens this season are immigrants, and how their individual journies as queer people have led them here. Out on the main stage Brooke Lynn Hytes introduces this week’s panel of judges Brad Goreski, Traci Melchor, and Canadian supermodel Monika Schnarre. The queens make their way down the runway in their sidewalk to catwalk couture looks. Based on the runway looks the judges have made some decisions. Lady Boom Boom, Kaos, Jada Shada Hudson, Miss Moço, Halal Bae, Miss Fiercalicious all represent the tops and bottoms of the week, meaning the rest of the queens are safe for the week.

Critiques start with Lady Boom Boom. Brad admits he was a little worried for her to transform her Juicy tracksuit into a couture look, but she did it perfectly. Traci tells Kaos she loves that she can see the first look so much in her final look and all of the judges agree. Next up, the judges tell Jada Shada that they loved how she transformed her first look into her runway look. Jada breaks down on the runway over how pretty she feels and I get it. Brad tells Miss Moço that he would wear her streetwear look, but she didn’t quite nail it with her final couture look. Brooke tells Halal that she is the first mustache queen on the show, and though Brad appreciates her raccoon and Gaultier references, it didn’t really translate into the final look. Finally the judges tell Miss Fiercalicious that her streetwear look was well executed, but they can’t see the original look into her runway look at all.

Backstage the safe queens relax with a drink and discuss who they think will be lip syncing. The tops and bottoms enter and give the lowdown on the critiques and throw a little bit of shade. Following deliberations, Brooke announces that the top queen of the week is Lady Boom Boom. Jada Shada, Kaos, and Miss Fiercalicious are all safe for the week. Meaning Halal Bae and Miss Moço are both up for elimination. The two bottoms lip sync for their lives to Beauty and a Beat by Justin Beiber featuring Nicki Minaj. Both queens give the performance their all, but in the end Miss Moço is safe to slay another day. Halal Bae is the first to go home this season, and we will miss her so much.

Next week on Canada’s Drag Race: the queens will be presenters and nominees at an award show, and rivalries start in the werk room.