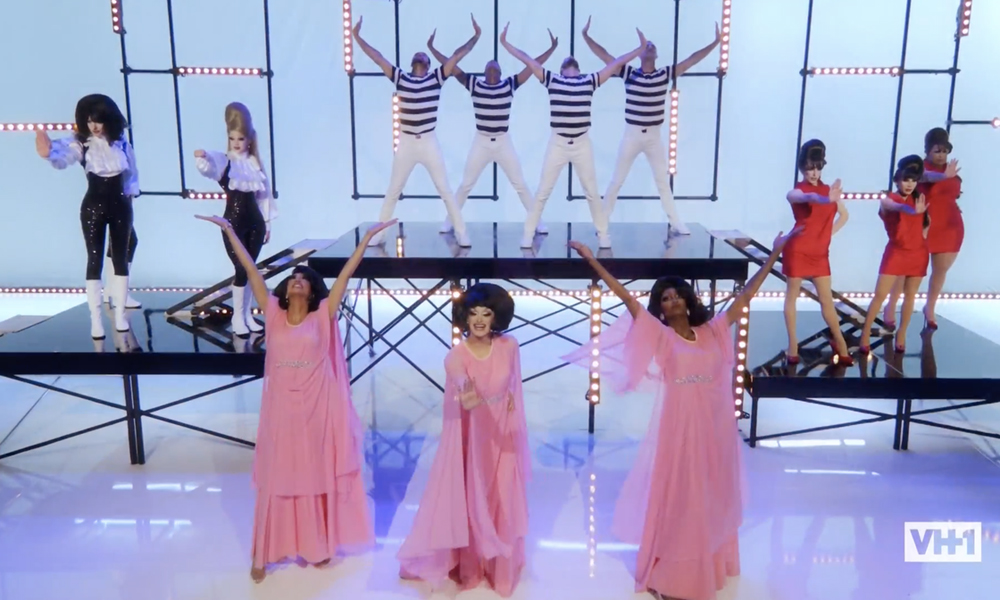 The queens give their best 60’s girl group performances, and one queen is sent packing…

On last week’s episode we didn’t say goodbye to any of the queens after an over acting soap opera maxi challenge, and a particularly memorable runway. Instead, the top two queens (Daya and Lady Cameron) ended up lip syncing for the $5,000 cash tip, with Lady Camden winning. However, something much bigger happened in last week’s episode of Untucked. Backstage, Jasmine Kennedie emotionally revealed she is trans and became the fourth trans queen to compete in season 14 behind Kerri Colby, Kornbread, and Bosco. This season has now had the most trans representation of any season of Drag Race. We LOVE to see it. This week the library will open, and the remaining queens will compete in a music challenge performing in 60s girl groups.

This week’s episode begins in the werk room following last week’s non-elimination. Lady Camden has a spring in her step after being crowned the winner of last week. The queens gather on the couch to kiki about last week’s lip sync, and Daya is happy about not being in the safe zone. Jasmine says she doesn’t think Daya deserves to be in the top which…tea. Jasmine talks to Deja and Jorgeous about coming out as trans last week, and Deja says she’s super proud of her. Angeria chases Kerri around the werk room and that’s a wrap on chaps.

It’s a new day in the werk room and the queens enter ready to conquer another week. Ru enters the room and tells the queens that for this week’s mini challenge the LIBRARY is open. Because reading is what??? FUNDIMENTAL! Kerri opens it up and the queens GO IN on each other, and nobody really got crickets! Ru announces that the winner of the mini challenge is Bosco! 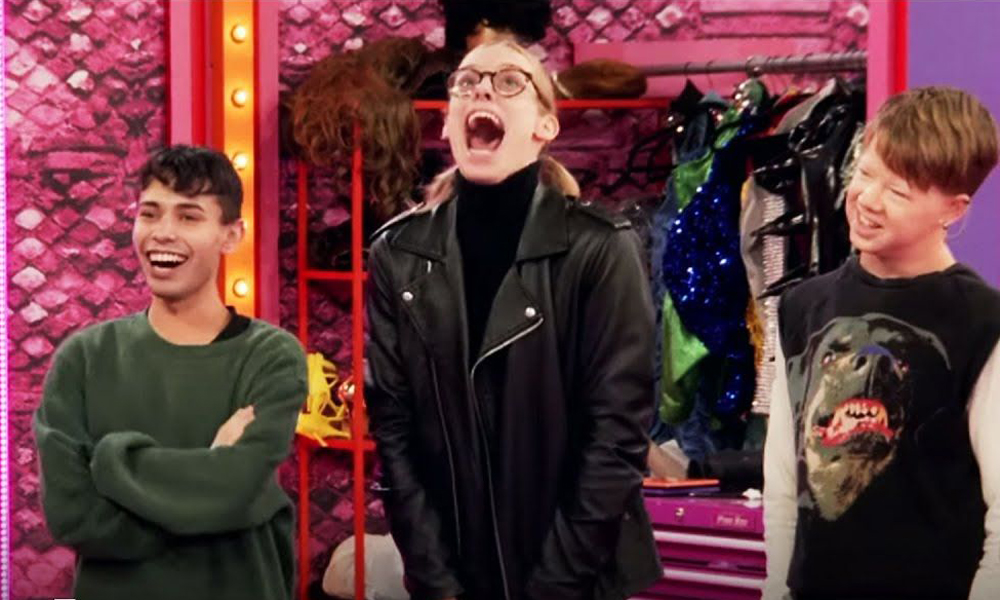 Ru then tells the queens that she’s setting the time machine to 1964, back to the time of iconic 60s girl groups. The queens will be splitting into three groups, writing their own verses, and coming up with their own choreography AND they’ll be picking their own groups.

It gets messy pretty fast with most queens picking the same “Bad Boys” song, with Daya refusing to sacrifice their top choice to even out the groups. They work it out eventually and break into their groups to get to work. Deja, Willow, and Bosco are in the Bad Boys group, and they worked together last week, so they know how to bounce off each other. Jasmine, Deja, and Jorgeous make up another group and Jasmine outs herself as being a TERRIBLE SINGER, which Deja is worried about. Kerri, Lady Camden and Angeria take on the Rupreme’s. The queens go out to the main stage in the makeshift recording studio to record the vocals with Michelle. Angeria goes first and nails her vocals right away. Kerri’s vocals have potential, but it’s a bit pitchy, and her voice lacks a bit of “personality”. The ShangRuLa’s (Bosco, Willow and Daya), and their song is full of innuendos, and totally get their vocals down. The final group The Runettes (Deja, Jasmine, and Jorgeous) and Deja starts strong, but the wheels fall off with Jorgeous. It’s flat and pitchy at the same time mama. Following their recording session, each group gets some time on the main stage to work out their choreography. Deja goes full kids cheer coach and dominates their rehearsal, Willow takes the lead in her group and they actually have some really cute choreo. Lady Camden makes sure that her group of non-dancers is comfortable with their steps, but Kerri is struggling.

It’s elimination day, and the queens enter the werk room and get busy getting ready for the runway and main stage. They talk about their favourite girl groups growing up, and Kerri reveals she grew up very religious and wasn’t allowed to listen to Destiny’s Child. Daya and Betty get into a little tussle but it’s no tea no shade…or is it? Out on the main stage Ru introduces this week’s judges, Michelle, Carson, and this week’s special guest actor Alec Mapa. Willow, Daya, and Bosco are up first. Their song is funny, and their vocals are strong. Deja, Jasmine, and Jorgeous are up next, and Deja’s vocals pulled through, and Jorgeous’s spoken word verse ended up working and at least their dancing was cute. Last up is Kerri, Lady Camden, and Angeria with their take on the Supremes. Angeria’s performance is really strong, but the rest of the group is iffy at best.

On the runway the category is “Heart On”, and the queens take take turns walking down the runway with their best love heart looks. Following the runway Ru announces the queens will be judged as individuals. She calls Willow, Bosco, and Jorgeous forward and they are all safe for the week. The remaining queens represent the tops and bottoms. Critiques start with Daya and compliment that she was in character all the time, and that she stole the limelight in her group. Michelle told Deja that she could sing, and that she did a good job in the challenge. Carson told Jasmine that she was too in her head in the challenge, and she breaks down in tears, and cuts Ru off. The judges tell Angeria she nailed her Diana Ross and love her runway. The judges tell Kerri she could have gone further in the challenge, and her runway look wasn’t all there. Lady Camden’s runway borders on costume, and she was a bit too soft-spoken for this challenge, especially after her big moment in the last episode.

After deliberations Ru announces Daya is the winner of this week’s challenge. Angeria, Deja, and Lady Camden are all safe for the week. Jasmine and Kerri are the bottom two queens of the week and both up for elimination. The bottom two queens lip sync for their lives to a remix of “Un-Break My Heart.” 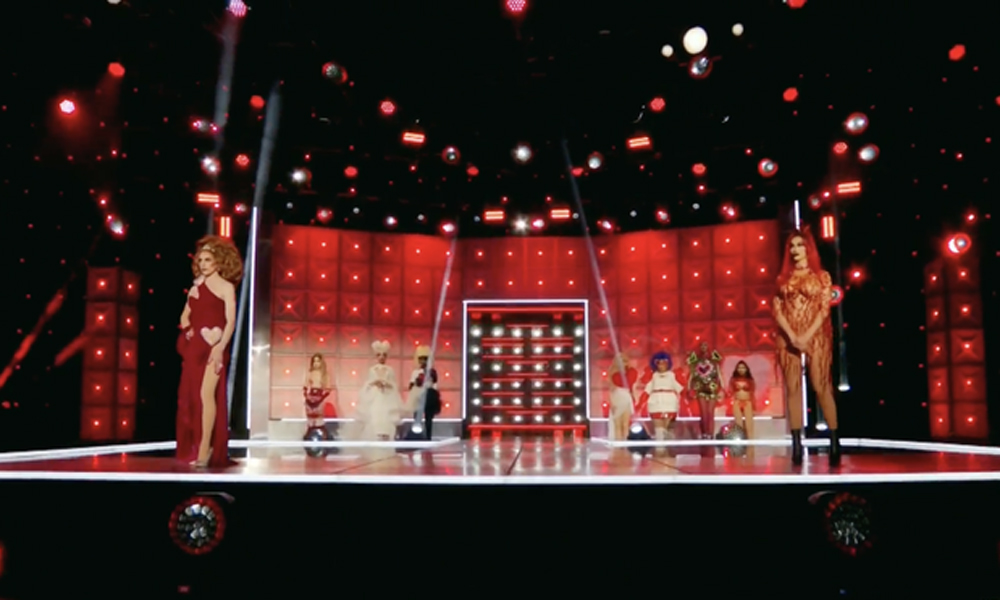 After a lip sync with one shoe, a split, and lots of passion Ru announces that Jasmine will live to slay another day, which unfortunately means Kerri Colby and the competition is a chocolate bar. Kerri’s bar is chocolate. Both her, and her confessionals will be truly missed in the competition.

Next week on Drag Race: The queens lead panels in a maxi challenge, and Nicole Byer is a guest judge.