The queens get inspiring with an activism inspired song challenge, and give us tropical vacation realness on the runway before another All Star is eliminated from the competition…

Last week we said goodbye to A’Keria C Davenport following an American Horror Story themed over-acting challenge, and a stunning lip sync performance between Kylie Sonique Love and lip sync assassin Manila Luzon. We are officially halfway through this All Stars season, and we still don’t have any more information about the “game within a game” Ru has been teasing since the first episode. This week the queens combine drag and activism with an original song challenge. Let’s get into it!

This week’s episode starts in the werk room following A’Keria’s elimination. Kylie says winning the challenge and lip sync was a huge confidence boost for her in the competition. The rest of the queens congratulate her. Ginger says last week Kylie has proven that she is big competition. The queens get down to business dissecting the lipstick votes. Kylie tells Ra’Jah that there was no way she was going to choose her to go home. The ballot box reveals that the vote for A’Keria was nearly unanimous. Ra’Jah tells the rest of the queens that she does not want to be in the bottom again. Jan notices that the majority of the queens left have won a main challenge, and two have not. The two outliers being Eureka and Pandora. Both queens have gotten good feedback throughout the competition so far, they just have to push a little harder for that win. In confessionals Pandora says it’s not always easy because she defaults to being quiet, and there are a lot of loud bitches in this competition! I don’t blame her!

The next day the queens enter the werk room and read A’Keria’s parting message on the mirror and move over to the table to celebrate the top seven. Ru interrupts with a video message about finding a song to start a spark with a good message before entering the werk room to announce this week’s main challenge. When the going gets tough you can always count on a drag queen. This week, the queens need to write, choreograph, and perform a new drag anthem called Show Up Queen. This is the queen’s chance to entertain and inspire with their own personal messages. The queens will be working in teams, and as Kylie was last week’s supreme, and Ra’Jah survived elimination, the two are opposing team captains. The queens pick their teams gym class dodgeball style. Team Ra’Jah is complete with Jan, Trinity, and Pandora (who was picked last). While Team Kylie is Ginger, and Eureka.

The queens get to work in their teams writing their inspiring songs. Kylie is feeling confident with her team of country gals, and Eureka is excited to weave activism into this week’s challenge. Over at Team Ra’Jah, Pandora makes it known she was the default member of the group, but Ra’Jah isn’t having it, and reminds the rest of the group that Pandora performed an original albeit ridiculous song in the season’s first challenge. Pandora reveals she’s been writing for a long time because she was shy growing up, and afraid to speak. It sounds like Team Ra’Jah has a couple of good concepts to build their songs off of, while Team Kylie are deciding on what to wear. Ginger uses her “gay camouflage” (pink leopard print) to good use as she blends right into the werk room wallpaper to spy on the opposing team. Ru does a progress check with the queens and talks to each team to see what they’re working on.

After the break it’s time for the queens to record their verses in the makeshift main stage recording studio. The queens all do a good job in the booth, but Jan’s verse, which is more about loving herself than inspiring others to do the same, has Eureka worried that she didn’t totally understand the assignment. Next the queens have the difficult task of choreographing themselves. There are a lot of good dancers in the group, so they should be able to get it together. Trinity takes over choregraphing for her group and she does a good job teaching the steps to her team, but Pandora struggles a little with the routine. Will she be able to get out of her head for the main performance? Team Kylie chooses to all work together with the choreography, and three people trying to make the decisions is… all over the place. Will they be able to show up and get it together for the performance?

It’s elimination day and the as the queens get ready for the main stage. While some queens are excited for their chance to be in a girl group, others are feeling a little nervous for the performance. Pandora thanks her group for being patient with her, and her group thanks each other for being so easy and fun to work with. Ginger tells the rest of Team Kylie that while they worked well together writing and recording, the choreography workshop was a little rocky. But the group is showing up for each other, and they’re ready for the performance. Out on the main stage Ru introduces the judges, and this week’s special guest Emmy award winning designer Zaldy. The queens perform their song, and they look great as groups. Team Ra’Jah is up first, and their verses and choreography are both strong. Team Kylie goes second, and they’re performance is strong as well, this is going to be another tough challenge to judge. Following the performance, the queens take the runway, and the category is Hot Tropics, which has me absolutely desperate for a beach vacation. 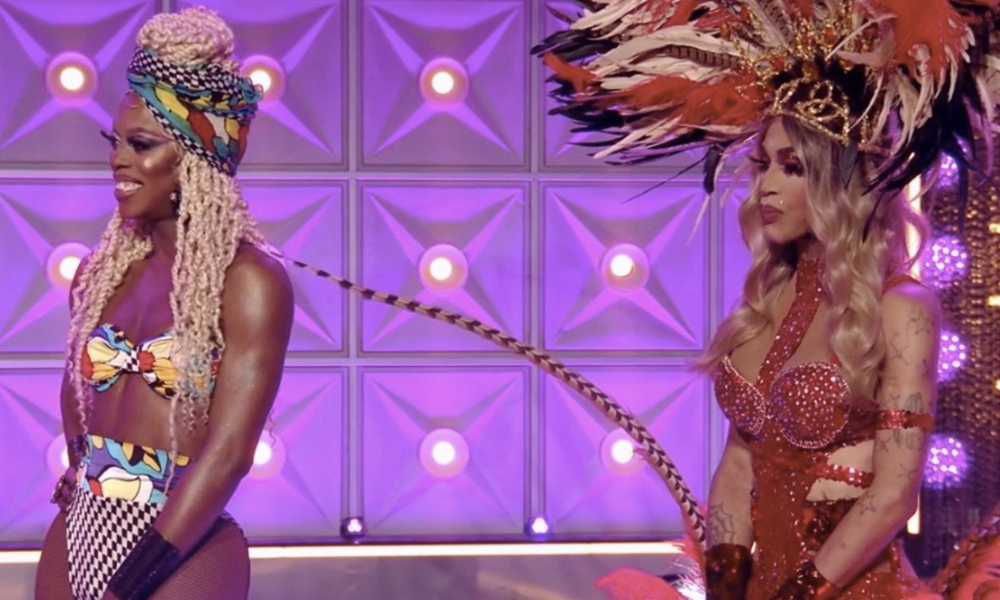 Following the runway, it’s time for critiques, and it starts with Jan. The judges love her runway look, and costume for the performance, but agreed her lyrics were a little light for the challenge, with Ru saying the performance lacked soul. Yikes. Carson liked Pandora’s runway look, but the judges thought she faded into the background of her group and could have done more with the lyrics. Michelle loved Ra’Jah’s verse, and thought her performance was strong, but hated that her boot wasn’t purple. The judges loved Trinity’s performance and loved that they could tell she choregraphed her group. Michelle praises her on her inspiring lyrics, and Carson loves her Carnival runway look. The judges liked her lyrics, and even complimented her beach ball bodysuit, before telling her she could have worn different earrings to camp it up. Michelle tells Ginger her lyrics were her favourite of the night, but her look during the performance was not her best. Finally, Ru calls Kylie a bombshell, and Michelle tells her she loves Kylie’s green hair. Has hell frozen over? Her looks were spot on, but lyrics could have been stronger. Based on the judge’s critiques, Ru announces that Trinity is the winner of the week. This is Trinity’s second win, making her the front runner of the season. WERK! Ra’Jah, Eureka, Ginger, and Kylie are all safe for the week. This leaves Pandora and Jan as the bottom two of the week.

Backstage the queens congratulate Trinity on her win, and the bottom queens about how they feel being in the bottom and Pandora opens up and breaks down. Jan tells the safe queens she wanted to show a fun side of her with her lyrics, but constantly feels like she’s missing the mark. Pandora tells Trinity she doesn’t feel like it’s time to go, and although she’s never won a challenge, she’s been consistently safe throughout the competition. Jan tells Trinity that she’s had lows, but also high highs, but she knows she deserves another chance, and that she’s a stronger performer than Pandora.

The queens take turns voting, and Trinity makes her choice. Back out on the main stage Ru reveals this week’s lip sync assassin, who is Alexis Matteo. Alexis and Trinity lip sync for their legacy to “Dance Again” by Jennifer Lopez. Both of these queens are performers, which makes this lip sync an energetic one. Ru announces that the winner of the lip sync is Alexis Mateo, which means the tip rolls over into next week’s winnings, and the group’s choice will be eliminated. Alexis reveals that the queen the group has chosen to eliminate is Pandora Boxx. BUT WAIT. Alexis also reveals she has another lip stick, and it’s Jan’s. It’s a tie! 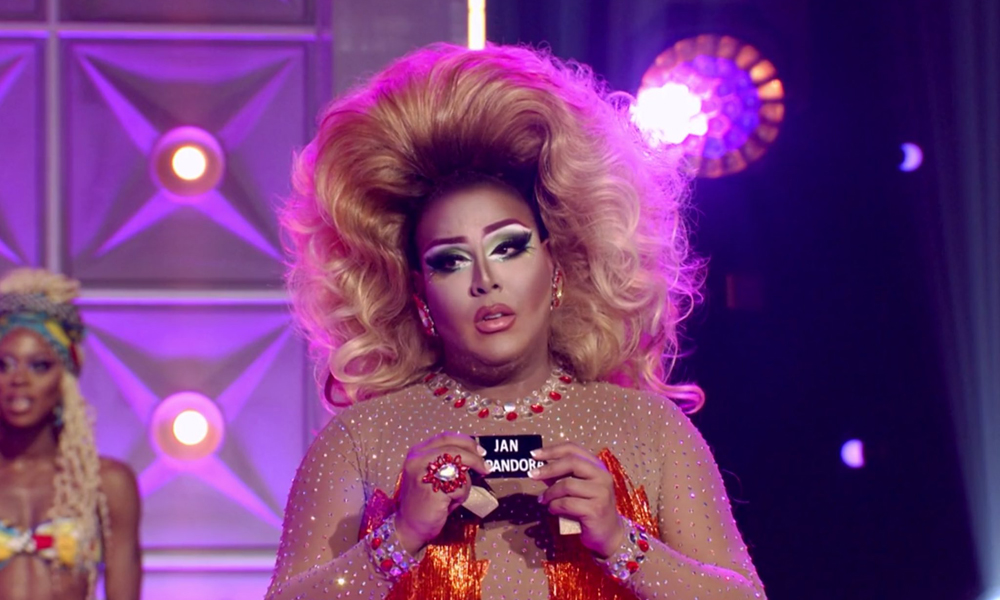 For the first time in Drag Race herstory! Ru says that the rules state in the event of a tie the power of elimination returns to the top All Star of the week meaning Trinity’s decision will be the final one. Trinity reveals that the queen she has chosen to be eliminated this week is Jan. 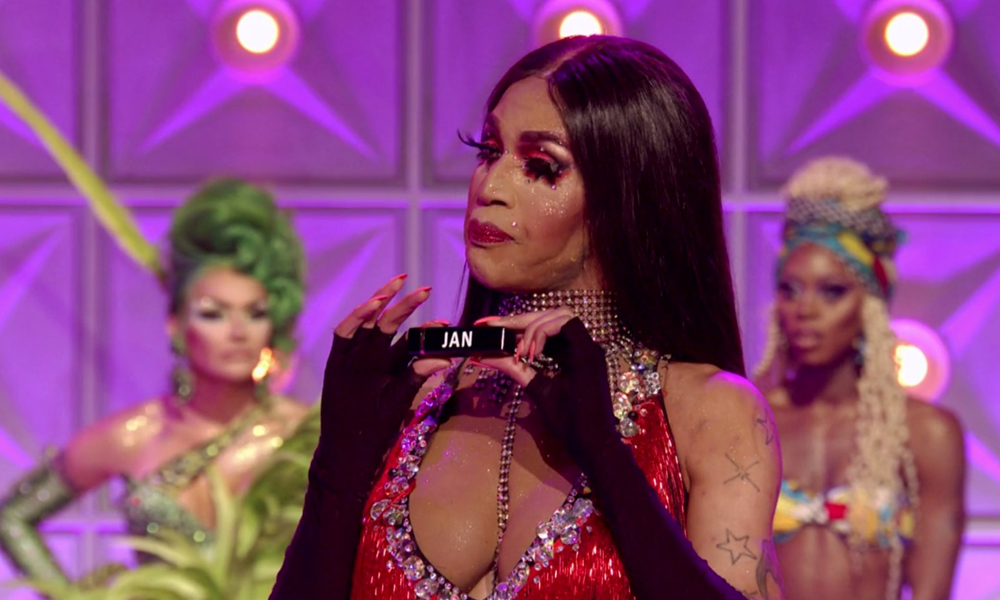 Her chance isn’t quite over, because as she’s packing, she gets the cryptic video message telling her about the game within a game. The Jantasy isn’t over…yet.

What we’ll see next week: The remaining queens play Snatch Game of Love, and another lip sync assassin is revealed.