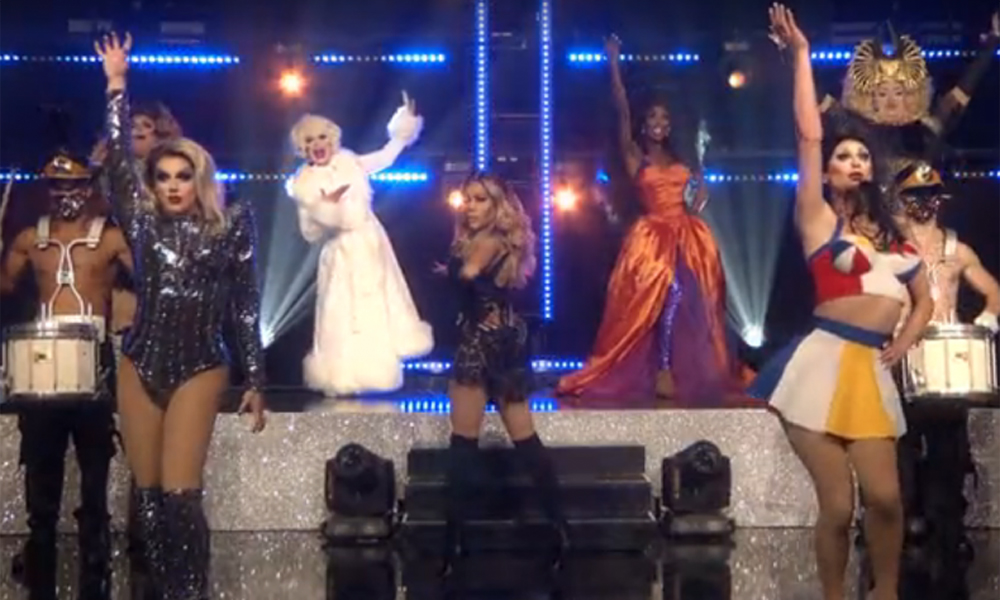 The queens pay tribute to iconic halftime performers with their own headline show, and another All Star is sent packing…

On the last episode of All Stars we said goodbye to Silky Nutmeg Ganache after this season’s first acting challenge. The elimination came following Silky’s performance in her group commercial where she barely had any lines and ended up fading into the background. This was very different from the attention demanding Silky fans had grown to love from season 11. But as we know, even though Silky has been “eliminated”, she still may have a chance thanks to the “game within a game” Ru has been teasing. This week the queens headline their own halftime shows. Let’s get into it!

We meet up with the queens in the werk room following Silky’s elimination, where they’re congratulate Trinity on her challenge win. Trinity is only a little upset she lost the lip sync, but says she was happy to do so to Laganja’s legendary performance. The queens gather on the couches to go through the lipstick box and tally the votes. Pandora opens the box, and the votes are pretty split between Silky and A’Keria. The queens who voted for A’Keria explain their decisions, A’Keria takes it like a champ, and refuses to be a “woe is me” girl. Trinity reveals that the lipstick she had chosen was Silky’s, meaning that she would have been eliminated no matter who won the lip sync last week. As the queens get out of drag, Jan explains that she’s happy to still be here, but she’s done being safe, and hopes to wow the judges this week.

It’s a new day, and after the queens enter the werk room singing a beautiful a-capella version of This Little Light of Mine (Silky’s talent show song), they read the eliminated queen’s message on the mirror. They gather at the table and talk about how their critiques last week are motivating their performances for this week’s maxi challenge. Ru interrupts with a video message about being a showstopper and enters the werk room and explains that All Stars is the gay version of “the big football game with all the commercials”, but any good queen knows that the real main event is the halftime show. For this week’s maxi challenge, the queens will be performing a RuPaul medley in their own halftime show. They’ll be portraying iconic halftime performers and learning choreography from Jamal Sims. The queens get to work and discuss who they’ll all be playing in the performance. Jan is feeling confident because this whole challenge is her gig. A’Keria is playing Prince, and Kylie Sonique is playing Aerosmith frontman Steven Tyler, who Trinity is not familiar with. Ra’Jah will be playing the iconic Diana Ross, Trinity is playing Beyonce, Pandora chooses Carol Channing, the first halftime performer EVER. Scarlet chooses Katy Perry, and Jan will play Lady Gaga. Eureka chooses Madonna, and Yara chooses Latin pop queen Shakira, and Ginger will open the show as Fergie. The queens listen to the track and get to learning their lines.

Jan is excited to play Lady Gaga, but Pandora isn’t sure she can do it justice. A’Keria is excited to pay tribute to Prince in the main challenge, while Scarlet wanders the werk room in a Left Shark costume. Trinity is excited, and rightfully nervous to play Beyonce, as the track record of Beyonce impersonations on Drag Race haven’t been good, but this isn’t a comedy challenge, so she should be good. Out on the main stage, the queens learn their choreography with Jamal Sims. The dance rehearsal goes as all dance rehearsals do on this show. A little rough at first for most of them, others pick the steps up quickly. But it will all come together for the final performance (hopefully). Yara, a Shakira superfan, kind of takes over her solo choreography lesson, and Trinity impresses Jamal, and the group with her Beyonce ferocity.

It’s elimination day, and as the queens prepare for their halftime headline moments, Trinity relishes in her newfound friendship with the other queens, something she didn’t experience on season 6. Ginger asks Jan for makeup tips after her contour critique from Michelle last week. Out on the main stage Ru introduces the judges, and this week’s special guest judge Jamal Sims, and it’s time for the halftime show to begin. Ginger opens the show as Fergie, and each of the queens take turns embodying their halftime show icon. Every queen gives great performance, it will be hard to eliminate any of them based on this challenge alone. Following the halftime performance, the category on the runway is “The Frill of it All!”. The queens take the runway in looks with ALL THE FRILLS. Rosé is probably punching the air right now.

Based on the halftime performance, and their runway looks, Ra’Jah, Scarlet, Kylie Sonique, and Pandora are all safe for the week. The remaining queens represent the tops and bottoms of the week. The critiques start with Ginger. The judges agree that her Fergie wasn’t the most outstanding of the group, but she did a good job with what she had. However, the judges loved her frilled runway look, and Michelle tells her how perfect, perfect, perfect her makeup looks. Eureka brought humour to Madonna, which Jamal and Michelle both loved, and Carson loved her frilled chaps. Michelle said that although Yara’s hips didn’t lie as Shakira, her lips did while she missed a bit of the song while dancing, and her frilled look didn’t really land. Michelle tells Jan her Gaga was phenomenal, Jamal commends her commitment to the performance, and Carson loves the different approach she took to the frill look. A’Keria’s Prince performance wasn’t fully there with the judges, as Carson explained it felt a little restricted and reined in, though Michelle says her frilled flower look is a stunning example of elevated drag. The judges tell Trinity she did a *Flawless* job as Beyonce in the performance. Following critiques, Ru announces that Jan is the top All Star of the week. Trinity, Eureka, and Ginger are all safe, which leaves Yara and A’Keria as the bottom two of the week.

In the werk room, Jan takes turns talking to the bottom queens starting with A’Keria who explains how bad she wants to be in the competition. Jan says she can recognize how bad A’Keria wants it, but the spark from her original season is missing this time around. Yara tells the group she’s pissed about being in the bottom, and once again she won’t beg for a spot in the competition but agrees with the critiques that were given to her. However, when it comes to her chat with Jan, Yara is happy to plead her case in hopes that she’ll stay. The safe queens cast their elimination votes, and Jan picks her lipstick before heading back out to the main stage.

Back on the runway, Ru presents this week’s lip sync assassin, Jessica Wild from season 2! Jan and Jessica lip sync for their legacy to Womanizer by queen Britney Spears. The performance is pretty equal from both queens, but Ru announces that Jessica Wild is the winner of this week’s lip sync. So, the twenty-thousand-dollar tip will be carried into next week’s winnings, and whoever the group chose will be eliminated. Jessica reveals that the queen the group has chosen to go home is Yara Sofia. Yara says her goodbyes and packs her bags when she gets the cryptic video message from Ru. Do you want to play a game Yara?

What we’ll see next week: The queens produce and host their own intimate talk show Pink Table Talk, and another lip sync assassin is revealed!