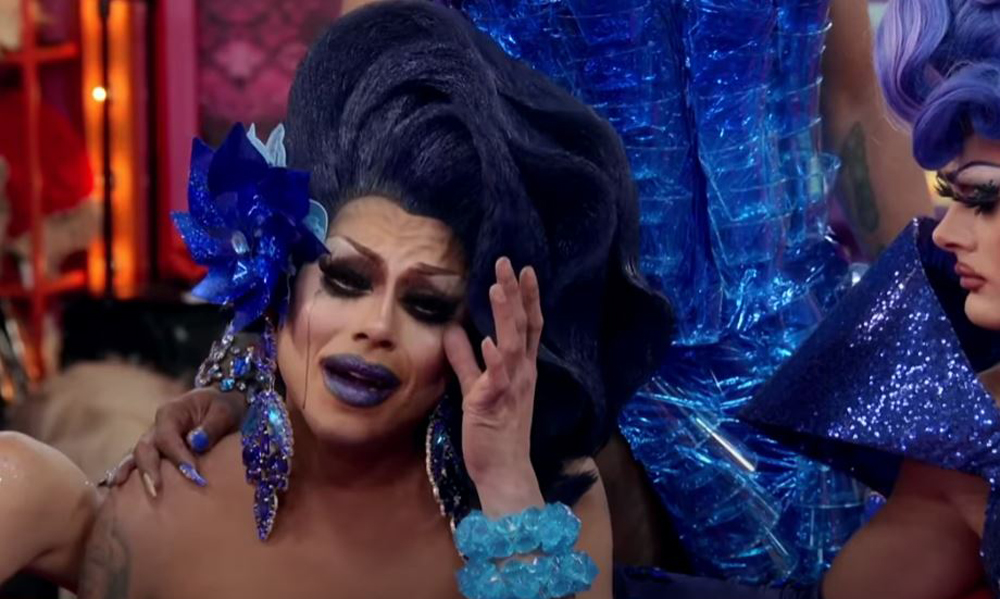 The remaining queens get blue, and compete in the first ball of the season…

In the last episode, we said our first goodbye (kind of), of the season when Serena ChaCha was sent home following the variety show. This week it looks like introductions are over, and drama may be on the horizon. There’s also that whole “game within a game” thing that needs to be explained, which we probably won’t get answers to util mid-season. Let’s get into the second episode!

We meet up with the queens back in the werk room following Serena’s elimination. The queens congratulate Trinity on staying in the competition. The queens open the voting box which reveals that every queen voted for Serena to go (excluding Serena). Yara reveals that she picked Trinity to go home. Trinity says there’s no hard feelings, and that this is just the game that needs to be played. It’s a new day in the werk room and the queens read Serena’s message on the mirror. Over at the table the queens try to figure out who the trade of the season is. There is no clear decision. Ru appears to tell the queens that for this week’s maxi challenge they’re throwing a ball, and the theme is BLUE. The ball will have three categories. “Blue Better Werk!”, for workwear, “Blue Jean Baby” for a denim look, and “Blue Ball Bonanza”, which must be made from scratch from unconventional and random blue materials.

The queens tear apart the table of blue materials for their final look. Jiggly is already struggling with the fleece blankets she’s got to work with. Ra’Jah who is quite confident in her sewing, is feeling exciting and nervous for this challenge. Scarlet is sweating over making her look, Yara admits she’s waiting for the other queens to finish so she can size up the competition, as well as take whatever leftover materials she can. Ru pops in to the werk room to check on progress and talks to each queen one by one on their life since the show, and what they’re planning to wear for the blue ball. As the queens put the finishing touches on their looks, and getting painted for the ball, they talk about how they are choosing the bottom queens of the season. It’s a conversation that’s had every season of All Stars within the first two episodes. While everyone agrees to vote with integrity, Jiggly brings up a good point, and asks the queens if personal relationships with each other with affect how they vote going forward. Nobody answers, which tells us everything we need to know.

Out on the runway, Ru introduces the judges, as well as this week’s guest judge Big Freeda. The Blue Ball begins, and we are treated to an impressive 36 looks. “Blue Better WERK” is up first, and the queens strut down the runway in looks inspired by blue collar jobs. We’ve got carpenters, mechanics, woodworkers, plumbers, and Silky once again incorporating milk into a look. The second category is “Blue Jean Baby”, and the queens are taking denim to the next level. There are a lot of stunning looks in this category, including Kylie Sonique Love’s Britney/Christina Y2K look with a beautiful trans flag trailing behind her on the runway, and a lot of flared denim on the other queens. The final category is “Blue Ball Bonanza”, a high-fashion look using unconventional materials. The majority of the made-from-scratch looks are absolutely stunning. Scarlet gave us a blue sequin mermaid gown, Silky served structured pants made out of a quilt. Eureka looks too cute in her blue minidress, and Ra’Jah’s quilted bodysuit is stunning.

Following the runway Ru announces that Jan, Silky, Scarlet, Pandora, Ginger, and Trinity are all safe for the week. The remaining queens represent the tops and bottoms of the week, and the critiques start with Ra’Jah. Michelle loved the hat on top of her wig in the first look, and Carson loved her Blue Jean Baby look. All of the judges agree that her final look was absolutely stunning. The judges loved all three of Kylie Sonique’s looks. The judges commend Eureka on her diverse looks, and the skill that went into making her minidress out of PAPER TABLECLOTHS. Jiggly’s sanitation worker look in the first category was a big hit with Michelle, but her second and third looks were not up to the level of the others. She said she wasn’t a seamstress! A’Keria received moderate praise for her looks, as well as some constrictive criticism. Michelle didn’t get Yara’s construction worker look, and her denim look wasn’t really denim. Carson tells her that sometimes there is too much going on, and it takes away from the overall look. Following critiques, Ru announces that the top All Star of the week is Ra’Jah O’Hara, and the bottom two of the week are Jiggly and Yara.

Backstage Ra’Jah talks to each of the bottom queens, where Yara explains she doesn’t want to be a “pick me” girl and beg for her spot. Jiggly tells the other queens that sewing is something she just can’t do, and she will continue to work hard to show what she has if she gets to stay. Yara cries in front of the safe queens, but Trinity isn’t buying it. We all watched Yara waste time in the werk room while she should have been creating a sickening look. Will this cost her a spot in the competition going forward? The queens vote Survivor style, and Ra’Jah chooses her elimination tribute. Back out on the runway, the secret lip sync assassin is the queen of the north, Canada’s pride and joy, Brooke Lynn Hytes! Brooke Lynn, and Ra’Jah lip sync for their legacy to Miss You Much by Janet Jackson. Both queens are giving it their all, and after an electric, and super fun performance, Ru announces that both Ra’Jah and Brooke Lynn have won the lip sync. It’s a tie, and this means that potentially two queens could be sent home tonight, depending on who Ra’Jah, and the group chose. Ra’Jah reveals that the queen she has decided to eliminate is Jiggly Caliente. Brooke Lynn reveals that the queen they have chosen is also Jiggly, which means no double elimination this week. Jiggly becomes the second queen to leave All Stars 6, but as we know from the end of the last episode, her game isn’t over yet. Once again, we are met with the eliminated queen packing her bags. Ru appears on the screen speaking in riddles again, but we still don’t know what’s going on.

What we’ll see next week: The queens create ads to promote their side hustles, and another lip sync assassin returns to the main stage.