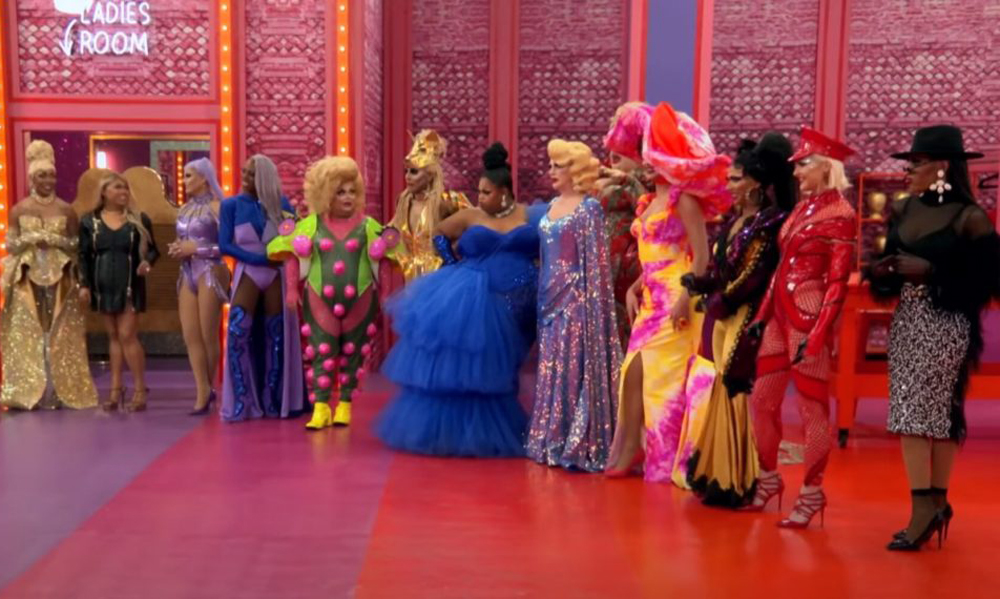 All Stars 6 starts with a bang, some bubbles, and lots of boobs…

We’ve had a quiet two months without any new Drag Race episodes (not counting Down Under, which has received its fair amount of criticism since it started in early May), and while summer here in Canada is looking like it will be more promising than last, it’s still not completely back to normal. So, with drag shows still not at their full and glorious capacity, we have been served some top tier, and socially distanced enterTAINTment for the summer with the arrival of All Stars 6. Ru promises for this season to be packed full of twists and turns, as well as “a game within a game”, whatever that means. I for one, am excited to see fan favourites back, back, back again for a second (or for some, third) shot at the crown. It’s the premiere episode, so it’s all about being re-introduced to our AS6 queens. Let’s get into it!

The first queen to step into the AS6 werk room is A’Keria C Davenport. You’ll remember A’Keria from season 11, where she made it all the way to the finale, where Yvie Oddly eventually won the season. Next in the werk room is Jiggly Caliente from season 4. Since her first run on the show, she’s become and icon as well as Drag Race royalty. Jiggly explains that there was a lot of insecurity the first time she was on the show and coming out as a trans woman has allowed her to fully know who she is, and she’s ready to compete again. Third into the werk room is none other than season 12’s Jan Sport! Jan gave 200 per cent on her season but admits that it came off a little “unhinged” on camera. Jan’s learned how to redirect her energy, and she’s eager to send the other queens packing (wink). Next up is Ra’Jah O’Hara from season 11. Ra’Jah knows she’s a bad bitch, but says she came across “bitchier” than she had hoped in her season. She’s ready to go full throttle this time around. Fifth in the werk room is miss Glamour Toad Ginger Minj. Ginger first competed in season 7 of the show, as well as All Stars 2. This is Ginger’s third time on the show after making it to the top four of season 7 but was one of the first to go home on All Stars 2. Since her first two runs on the show, you’ve seen her in the Netflix original movie Dumplin. She’s back for another chance at that crown, and she’s not croaking bitch.

Next in is Yara Sofia from Season 3 and All Stars 1. She admits she’s proud of her performance in both seasons, but she’s here to show us more. Also arriving to the werk room is Silky Nutmeg Ganache from season 11. Complete with a chocolate chip cookie, and a glass of milk, both of which were pulled from the top of her dress upon entering the werk room, Silky is back to take the cake. Like Yara, she’s proud of what she presented on her season, but time has passed, and she has improved. Silky is excited to show us how she’s evolved in the last two years. Following Silky, is Pandora Boxx from season 2 and All Stars 1. Pandora won Miss Congeniality in season 2, but admits she needs a second shot. Next in is Scarlet Envy, also from season 11. Scarlet says her game was cut short in season 11, and she’s here to prove she can win it all. Representing Panama is Serena ChaCha from season 5. She was 21 when she first competed, but now she’s ready for another shot, as she’s matured a lot since her first time on the show. Next in is Season 2’s Kylie Sonique Love. She has grown so much since her first time on the show and has been dreaming about her second chance for a long time.

Next in is Trinity K. Bonet, the lip- sync assassin of season 6. Trinity competed with a lot of now-iconic queens on her season and was very reserved and closed off when it came to criticism. She says she’s grown so much since season 6 and can’t wait for another chance to win the crown. Last to enter the werk room is Eureka! This is Eureka’s third time on the show. She popped her knee in season 9, and came back to compete in season 10, where she made it all the way to the finale but left without the crown. Eureka makes 13, which is the largest All Stars cast to date. Following introductions, Ru enters the werk room, and tells the queens he’s happy to announce All Stars is still a Ru-mocracy. Meaning each week each of the queens will vote for the bottom queen they believe should be eliminated. Before the competition begins officially Ru tells the queens there’s one more queen that needs to be revealed. Oh HELL no.

Not to worry, the final queen is actually fashion queen, and queer icon Miss Piggy, who like a true CDC-rule-following-DIVA, is appearing via video chat to the werk room. Miss Piggy is here to help introduce the queens to read, because in the library is OFFICIALLY open. The queens take turns reading each other, and after some truly deep cuts, and cricket sound effects, the winner of the reading challenge is Ginger Minj. Ru announces that this week’s maxi challenge is an All-Star Variety Extravaganza. The queens get out of drag and get to work preparing for the variety show. Silky tells Serena ChaCha that she’s happy to see her here for a second chance, and Ginger talks about how excited she is to be competing with her good friend Jiggly. As they prepare to take the stage for the variety show, some queens share they will sing, while Trinity announces she’s doing comedy, which has sent queens home in All Stars herstory.

Out on the main stage, Ru receives a phone call from a disgruntled Miss Piggy who has beef with Michelle over who Ru’s real best friend is. Ru introduces the panel, Michelle, Carson, and Ross. The variety show opens with Jan who is singing, and the bitch can SING. Next up is Pandora Boxx, who is also singing. The song is all about being ridiculous, and Pandora is really selling it. Next is Jiggly, who is ALSO singing an original song, and she is feeling the full fantasy. Kylie Sonique Love is singing an original song, although hers has more of a Cabaret/Burlesque feel to it. It’s as stunning and sickening as you would expect. Next up is Ra’Jah, who is cutting and sewing a dress in under a minute. As someone who has taught themselves to sew over the past six months, this is perhaps the most impressive thing I have ever seen on a Drag Race variety show. After a minute Ra’Jah has the dress on, and it certainly is A DRESS. After our quick sewing break, A’Keria takes the stage with a song and dance performance with plenty of wardrobe reveals. Trinity takes the stage for her comedy performance, and 3 seconds in, it is already an absolute train wreck. Performing stand-up comedy your first time back on the main stage is a bold choice, but perhaps we should leave it to the queens who do stand-up outside of Drag Race?

After the break, Eureka! takes the stage looking gorgeous, with a power ballad. Next, Scarlet performs a burlesque routine that starts with washing her hands and ends with blowing an enormous…bubble. Silky takes us to church with a soulful, piano rendition of This Little Light. Serena ChaCha performs an energetic song about wigs. Ginger Minj performs a candy-coated pop song Gummy Bear. Last, but not least, Yara Sofia jiggles her silicone boobs down the runway in a performance that is equally confusing, impressive, and hilarious.

Following the performance, Ru tells the queens that each week she will choose one top All Star. She will choose the queen she thinks should be sent home. The rest of the queens will cast a vote to decide the other queen on the chopping block. The top All Star of the week will lip sync for her legacy against a secret lip sync assassin. If the weekly top All Star wins, she gets a cash tip of ten thousand dollars, and the bottom queen she chose will be sent home. If the lip sync assassin wins, the group elimination pick will win. Ru calls Eureka, A’Keria, Jiggly, Jan, Kylie Sonique Love, Scarlet, and Ginger to the front and announces they are all safe for the week. The remaining queens represent the tops and bottoms of the week. The critiques start with Silky. She started on a high, but the performance lacked a little energy. The judges loved Trinity’s look but admit her shortcomings with her comedy set was hard to come back from. Trinity graciously took and agreed with the critiques. Michelle tells Ra’Jah that although she had seen a talent similar from Bianca Del Rio, she had never seen it done in under a minute. She and the rest of the judges were very impressed with her sewing routine. Yara Sofia, and her giant silicone boobs stole the show from the sheer ridiculousness of them. The judges also lived how funny, and enjoyable Pandora Boxx was to watch on stage. Michelle tells Serena ChaCha that the idea and her song were great, but the execution of the performance was underwhelming. Based on the judge’s critiques, Ru announces that Yara Sofia is the top All Star of the week. Ra’Jah, Pandora, and Silky are all safe. This leaves Trinity, and Serena are the bottom two of the week.

Backstage, the queens congratulate Yara on the first win of the season. Yara takes each of the bottom queens aside and talk to them. Trinity is feeling nervous about her fate being in the other queen’s hands, while Serena knows she gave it her all on the stage. The queens take turns voting, and Yara makes her elimination choice. Back out on the main stage, Ru presents this week’s secret lip sync assassin, and it is no other than … COCO MONTRESE! Yara and Coco lip sync to Uptown Funk, and Yara takes the opportunity to perform her variety show talent again. After a dazzling, and particularly booby performance, Ru announces the winner of the first lip sync of All Stars 6 is assassin Coco Montrese. Ru tells the queens that the ten-thousand-dollar tip is rolled over to next week, and Coco reveals that the bottom queen chosen by the rest of the cast to go home is Serena ChaCha. Serena sashays off the runway and becomes the first to be eliminated on All Stars 6. But it’s not over until it’s over. An hour after being eliminated, Serena is packing her things in the work room when Ru appears to deliver a message. Once again Ru says that this season there is a game within a game, and something tells me it will involve the eliminated queens. What could it mean?

What we’ll see next episode: the queens are throwing a ball in the maxi challenge, and some tea is spilled at the makeup table.