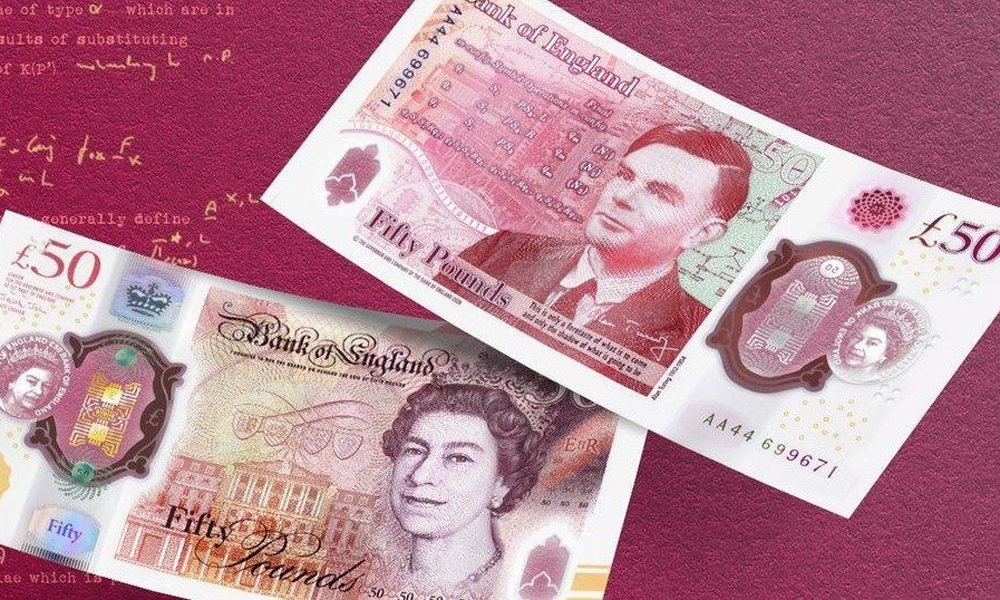 The Bank of England has revealed the design for the UK’s new £50 note featuring computer scientist and codebreaker Alan Turing (June 23, 1912 – June 7, 1954). Featuring the Queen of England on one side, the reverse of the new £50 note (approximately worth $86 CAD) will feature the persecuted, gay mathematician and early computing pioneer.

Turing was selected to appear on the note in July 2019 in recognition of his groundbreaking work in mathematics and computer science, as well as his role in cracking the Enigma code used by Germany in World War II.

The polymer note will enter circulation from June 23 this year, and incorporates a number of designs linked to Turing’s life and legacy. These include technical drawings for the bombe, a decryption device used during WWII; a string of ticker tape with Turing’s birthday rendered in binary (23 June 1912); a green and gold security foil resembling a microchip; and a table and mathematical formulae taken from one of Turing’s most famous papers.

As well as honouring his scientific achievements, Turing was also selected to appear on the bank note in recognition of his persecution by the UK government for homosexuality. Turing was openly gay among friends, but in 1952 he was arrested and charged with “gross indecency” for homosexual acts, which were illegal in England and Wales until 1967. Turing did not deny the charges and was convicted and sentenced to chemical castration with hormones. He wrote in a letter before he was charged: “No doubt I shall emerge from it all a different man, but quite who I’ve not found out.” He died two years later at the age of 41 after eating an apple laced with cyanide… Although historians still disagree over whether his death was suicide or a case of accidental poisoning.

The Queen granted Turing a posthumous pardon in 2013 and his life was told in the 2014 movie, The Imitation Game, starring Benedict Cumberbatch as Turing.