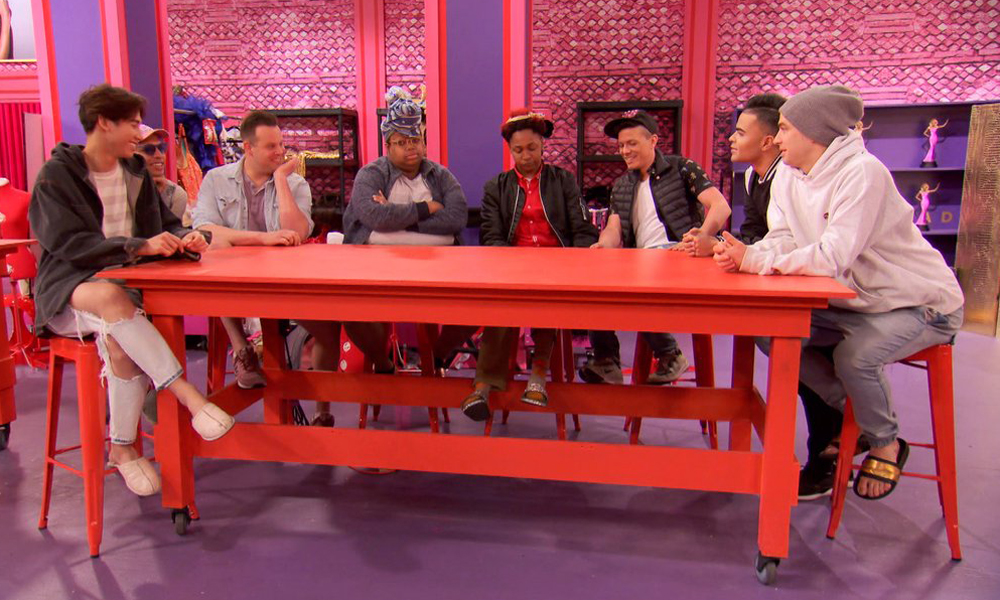 All aboard the S.S. Sickening…

It’s the episode we’ve all been waiting for, and after AS4’s strange take on this challenge specifically, I for one am extremely excited for the Snatch Game to return to its former, and originally formatted glory. Before we get to be absolutely snatched by some killer celebrity impersonations, we have to catch up with the queens following last week’s elimination, and heated Untucked. This episode starts as any episode does (are you new here?) in the werk room, where the remaining queens are reading Ra’Jah’s lipstick message on the mirror. It opens with Silky saying she needs to watch out for Yvie and Brooke Lynn, because obviously. Over on the couches, the drama from Untucked continues with both Silky and Vanjie ganging up on Yvie, and I can’t help but wonder if maybe Yvie is instigating most of the drama. As we all know, Snatch Game is a make or break moment in the season, so this episode should be an interesting, and explosive one to watch.

The next day in the werk room, the tension continues to rise just as Ru walks in with a copy of his newest book, and this week’s mini challenge, which had the queens pitching their own versions of self-help books. After getting into their weekly quick drag, the queens pitched non-fiction material that I would definitely pre-order. Silky Nutmeg Ganache took home the Postmates prize, and a quick appearance from Morgan McMicheals. After a certain moment involving a ping-pong ball, Ru announced this week’s maxi-challenge would be the most iconic of all the Drag Race challenges, SNATCH GAME! These girls have to BRING IT.

Brooke Lynn was feeling a bit overwhelmed with the challenge, and revealved she would be impersonating another iconic Canadian queen, Celine Dion. Ru entered the werk room with Season 5 winner, and Snatch Game legend Jinkx Monsoon. Yvie also expressed she was nervous about her impersonation of Whoopie Goldberg, but her win in the early acting challenge was keeping her optimistic about the challenge. Brooke’s werk room Celine impersonation was NOT good, and I’m worried to be honest with you all. After the werk room walk-around it’s pretty obvious who will sink, and who will swim, so grab your life vests queens.

After a quick break it’s Snatch Game time, and this year, we’re at sea. The opening was mostly really top notch, aside from the few who had no idea what they were doing, but overall, a lot of laughs were had. If any of the queens needed to get on that life-boat it was Brooke Lynn, and Yvie with their first big misses of the season so far, it was hard to watch them sink with their super cringe-worthy performances. Overall the Snatch Game went swimmingly, though there wasn’t a stand out performance like there has been in previous seasons. Bummer.

Following that truly mediocre Snatch Game, it’s elimination day, and the queens are getting ready for the runway. Yvie apologizes to Silky, but Silky isn’t buying what she’s selling. On the other hand, Vanjie was feeling particularly regretful over how she treated Yvie in Untucked last week. The two made up, and got to a mutual understanding and level of respect. We love an apologetic queen. Out on the runway the guest judges are Tony Hale, and Clea Duvall, and the category is Sequins on the Runway. The queens turned it out with stunning sparkling lewks both glam, and camp, and one INCREDIBLE RU-VEAL by one Miss Brooke Lynn Hytes that might just save her from a possible lip-sync/elimination moment. With A’keria, Plastique safe, that puts the rest of the queens in either the top or bottom for the week. Vanjie got read to filth for her bodysuit on the runway, and her subpar performance as the Catch Me Outside girl. Nina West wowed the judges with her campy lewk, and even better double Snatch Game performance. Brooke’s Celine missed the mark, majorly, while Shuga soared on both the Snatch Game and the Runway in one of Ru’s “favourite gowns to ever walk the runway”. Yvie didn’t quite go for gold (berg) with her Whoopie, and Silky got some praise for her Snatch Game.

After the judge’s deliberations, Ru announced the winner of this week’s challenge was Silky Ganache, and it was very well deserved. This week’s bottoms were unfortunately my top favourites of the season, Brooke Lynn, and Yvie. The queens lip synced passionately for their lives to Demi Lovato’s Sorry, Not Sorry, I was feeling STRESSED, because it was the most INCREDIBLE lip sync I have ever watched on this show. So thank the good Ru that both of these incredible queens were saved from elimination, with eight queens still remaining. I have never been happier about a double save. A happy long weekend to all, and to all a good night.

Front-runners of the week: Though they were both in the bottom this week, Brooke Lynn, and Yvie continue to slay, and show the other queens they are not here to play.

Something we’re still confused about: Over the past few weeks there have been small comments made about Plastique’s backstory, and her being a pathological liar. We’re not sure if this is alluding to something bigger that will come up in the future, or if it’s side commentary we shouldn’t be paying attention to. Only time will tell.

What we’ll see next week: Another acting challenge, an explosive runway, and more pressure builds between Silky and Yvie.