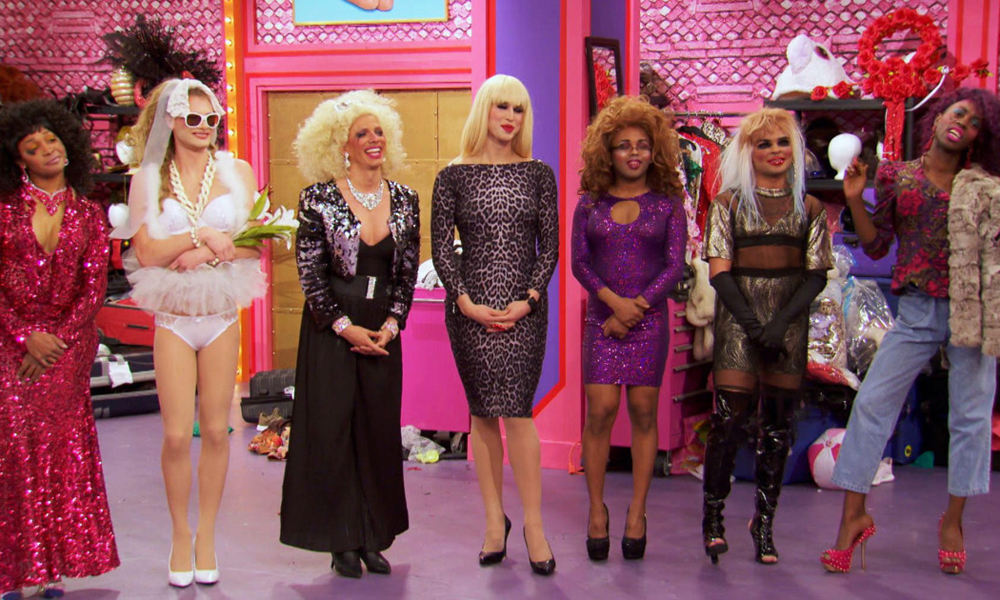 Last week we were introduced to the new cast of queens, and a whole new season, which looks to be pretty promising so far if you ask me. We were already treated with a sewing challenge (I’m still thanking Mama Ru for that one), Miley Cyrus was undercover (sort of), and we said biiiyyeeee to the first queen (Vanjie told you not to use tulle). This week’s episode opens following Soju’s early elimination, which we’ll chalk up to her needing medical attention for that cyst, yikes. Brooke Lynn Hytes, is fully thriving following her first win. Scarlet Envy, however, was left feeling a little sour. Not to worry queen, you’ll get yours too.

The next day in the werk room the queens played a quick game of F-M-K, and Silky got more irritating by the second. Just in time, Ru interrupts with She Mail, and this week’s mini challenge, a quick-drag phoo-bomb challenge. Brooke Lynn Hytes, and Silky took the lead in the mini challenge. Ru then let the queens know that the maxi challenge this week would be an acting challenge (the first of many, I’m sure). This also means the two mini challenge winners got to choose their own casts for their movies gym class style. Scarlet, being the last to get chosen declared that she was Julia Roberts, and it was a big mistake. Huge. I’ll believe it when I see it girl.

As the teams received their scripts for the challenge, the team captains were up to cast the parts from the teams they have chosen. At this point, all I care about is Vanjie, because everything she is saying in her confessional, or otherwise is pure gold. Ru interrupts the rehearsals to stir up some drama. Team Brooke Lynn took the full opportunity to throw Silky under the bus for being a “little much”, and it’s honestly like none of them have ever been around other queens before. Silky, a bit bothered by the comments, was finding it hard to shake off the fact that not everybody likes her, and her team was a little worried about how she would perform under the pressure. First up to film is Brooke Lynn’s group, who are performing a parody of Black Panther, with Plastique Tiara taking the lead with the most impressive performance. Next up is Silky’s group, who are doing a parody of Get Out, were off to an impressive start. Even when Vanjie was messing up, I was still laughing so hard I couldn’t hear what she was even saying, but I knew it was funny. Overall, both teams seemed to be just as horrible as each other, but the editing should make these short film parodies look mediocre at best. What? We were all thinking it.

It’s already elimination day before we know it, and tea is being spilled in the werk room surrounding the whole “Silky situation”. And by the look of everybody’s makeup, this runway should be full of drama too. Out on the runway, the category is “What’s your sign”, which saw the queens dressed as their zodiac signs, and I am living for it all.  There was no Taurus representation, but that’s fine I guess. I’m not bitter about it or anything. Following the runway, all of the queens, and judges viewed the finished products. Good God Girl, Get Out, had better acting for sure, but Why Does it got to be Black, Panther, featured some stunning acting from Plastique Tiara specifically.

This week Brooke Lynn Hytes served lewks on her runway look, but not as much for her performance as a group leader in her film. Plastique was given high praise for both her outfit and performance. Scarlett Envy and Yvie Oddly were applauded for their chemistry, with Mercedes and Kahanna both missing the mark with their roles and looks this week.

Ru announced that the winners this week are none other than Scarlet and Yvie. Not bad for a queen picked last. Landing in the bottom this week for the second time is Kahana Montrese, and Mercedes Iman Diamond. They battled for their spot in the competition to Work Bitch by our lord and savior Britney Jean Spears, and we saw new sides to both of these queens. In a lip sync so wild that there were multiple flips, but ultimately, Kahanna was sent home after her second week in the bottom. Farewell Kahanna, it was only fair. If the second week has taught us anything, it’s that these queens are bringing it this year, and I am not mad about it. I can’t wait to see where the rest of this season goes.

Frontrunner of the week: Vanjie is still stealing every scene for me, and I hope she never stops. Plastique also really came through this week, and I hope we get to see more of what she can do for a long time.

Most likely to win an Academy Award for their performance this week: Scarlet Envy, hands down.

What we’ll see next week: Another acting challenge, Troye Sivan, and some harsh criticism including my favourite lyrics from a Grinch song, stink, stank, stunk. Stunning.

The gang with eureka and the other team they were Friggin awesome. But these gals. From good God. Girl. Get. Out. GirrrrrrL. They. Blow

The gang with eureka and the other team they were Friggin awesome. But these gals. From good God. Girl. Get. Out. GirrrrrrL. They. Suck