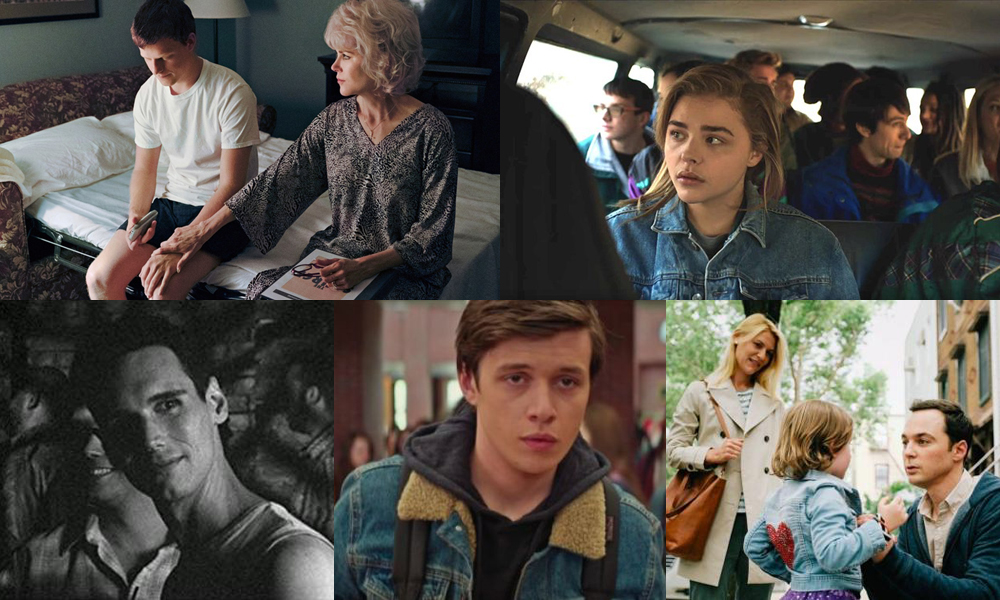 Awards season is fast approaching and that means well-deserved recognition for all the best in the entertainment business. It also means plenty of snubs and debates over diversity in Hollywood. Inclusivity is more and more important every year, but progress is a process and more films that portray the LGBT experience are making it into the mainstream. The recent Golden Globe nominations recognized a number of LGBT performers and projects including Ryan Murphy’s Pose which features five transgender women of colour in leading roles.

Reactions to the news that last year’s beloved Call Me By Your Name is getting both a book and film sequel proves that LGBTQ+ focused content is what the people want. In the meantime, here are just a few of this year’s best LGBTQ+ films to add to your must-watch list.

Boy Erased
Written and directed by Joel Edgerton and based on the book Boy Erased: A Memoir of Faith, Identity and Family by Garrard Conley, Boy Erased is about Jared, a teenager who is sent to conversion therapy after he tells his parents he’s attracted to men. Jared’s parents, played by Russell Crowe and Nicole Kidman are Baptists who believe homosexuality goes against God. They send Jared to a program that claims sexuality is a choice where he meets a range of other young men, some who believe in conversion therapy and think it will work and others who are just pretending until they can get out and go back to their lives. Lucas Hedges, who plays Jared, has been nominated for a Golden Globe and also came out earlier this year saying that he exists “on a spectrum: Not totally straight, but also not gay and not necessarily bisexual.”

The Miseducation of Cameron Post
Another film about conversion therapy, The Miseducation of Cameron Post stars Chloe Grace Moretz as the title character. After she’s caught fooling around with a girl on prom night, Cameron’s religious aunt sends her to a conversion therapy centre for teenagers called God’s Promise. She is skeptical of the camp and its views on homosexuality but she has no choice but to participate anyway. The film debuted at the Sundance Film Festival and won the Grand Jury Prize for US Drama, the festival’s most prestigious award.

1985
An expansion of a short film from 2016, 1985 portrays Adrian, a closeted gay man who is returning to his hometown in Texas after years of living in New York City. He is going home to tell his family that he is dying of AIDS. Being 1985, the AIDS crisis is in full force, but Adrian’s parents (played by Michael Chiklis and Virginia Madsen) have no concept of his lifestyle and the things he has experienced and endured. Shot in black and white, the film premiered at SXSW 2018 and screened at a number of LGBT film festivals including the Vancouver Queer Film Festival. It has received overwhelmingly positive reviews with critics calling it “haunting”, “moving, and “profoundly resonant”.

Love, Simon
Love, Simon, which is based on the book Simon vs. the Homo Sapiens Agenda asks the question that plenty of gay people have asked themselves: why is it only gay people that have to come out? Why is straight the default? Simon, played by Nick Robinson, is a high school student who knows he is gay—but he hasn’t told anyone yet. He has typical teenager problems, except for the mysterious blackmailer threatening to out him to the entire school. The film received rave reviews for its “big heart, diverse and talented cast” and was compared to the classic romantic coming-of-age films of John Hughes. It was also the first film by a major Hollywood studio to centre around a gay teenage romance.

A Kid Like Jake
Kids are beginning to question their gender expression younger and younger, but with that comes the need for parents to change how they do things. In A Kid Like Jake a couple played by Clare Danes and Jim Parsons have raised their son Jake to be “gender-expansive” and feel comfortable with his interests no matter what they are. When Jake is about to start kindergarten, his parents start to doubt their approach and the influence they have over him, worried that he will be labeled and get the impression something is wrong with him. Originally written for the stage, A Kid Like Jake portrays a family that is trying to find the right path despite social norms, which is becoming a huge part of the modern parenting struggle.