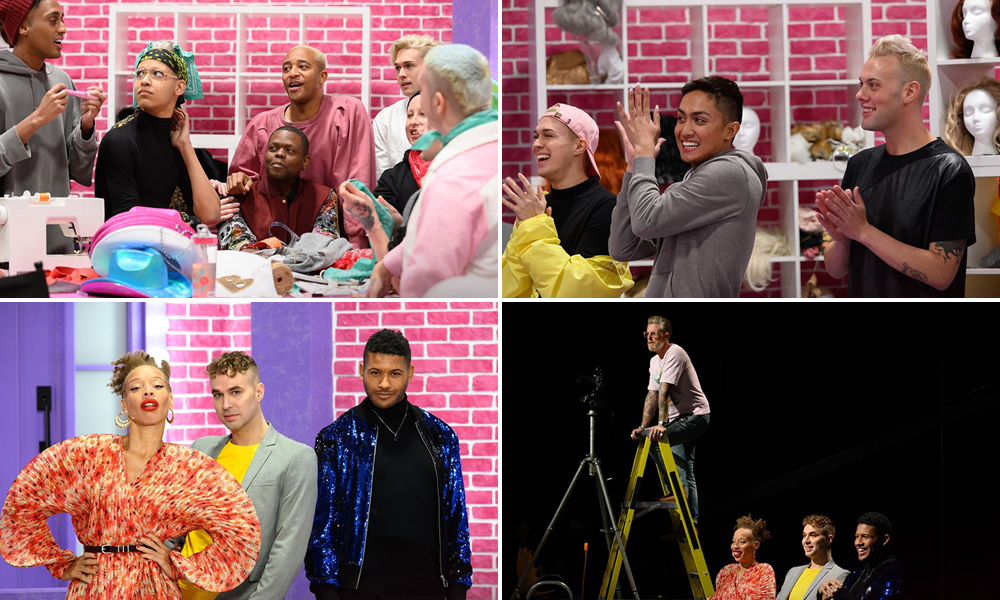 Canada, I hope you’re ready. We are about to meet the 12 queens chosen to represent our nation on Canada’s premiere drag competition show. We’ve watched American queens for years. Yes, it’s true, we’ve started to infiltrate their competition, but with all that Canada’s drag scene has to offer, it was about time we got a little show of our own. Our reigning Queen of the North Brooke Lynn Hytes is not only hosting, but she’s ready to pass on her crown. So, buckle up, because this is going to be a ride you won’t want to miss.

Our premiere episode begins in our very own werk room, complete with bedazzled maple leaf entrance. The first queen to enter the werk room, and also our hearts is none other than Priyanka! The Toronto queen has only been doing drag for two years, but she’s ready to compete for the crown. The second queen to make her entrance is Vancouver’s Ilona Verley. She’s known for her “sickening Instagram”, and if her monochromatic look is a preview for what we’ll see from her this season, I’m excited. The third queen in is Kiara from Montreal. She’s a versatile queen, and like Priyanka she’s also been doing drag for two years. The fourth queen is another Toronto queen (by way of Essex Ontario) Juice Boxx. Her angel look is to die for, but her entrance is quirky. The fifth queen in the room is Anastarzia Anaquway from East York Ontario. This is a queen who makes all of her own looks, and she’s a pageant queen. Stunning. Next in the werk room is Lemon who is from Toronto but currently lives in New York City. She’s a queen with a background in dance. Sound familiar? The seventh queen in the room is Scarlett BoBo, also from Toronto. Scarlett’s drag style is unique, and it will surely set her apart from the competition. Next in is Kyne from Kitchener-Waterloo Ontario! She’s a singer, she’s a dancer, and she’s here to entertain us. Next in the room is BOA (Bitch on Arrival) from Windsor ON, and she is WHAT? Constipated (her words not mine). While some of the other queens have something to say about BOA’s reputation in the Toronto drag scene, she’s here to make waves. Is one of her utters pierced? Next in is Rita Baga from Montreal. Her gorgeous French-Canadian accent is giving me Nicky Doll vibes, and she’s a legend in the Montreal drag community, so I’m sure she’ll be one to watch. Next we’re introduced to Jimbo from Victoria B.C. She’s a quirky conceptual queen, and if her sexy latex dark Mickey Mouse entrance look is anything like what she’ll be serving us this season, we’re all in for a treat. Last but certainly not least Toronto’s Tynomi Banks makes her entrance, and she did NOT COME TO PLAY WITH THAT BEDAZZLED BODYSUIT.

As the queens all start to mingle around the infamous pink table, they receive their first piece of video mail from RuPaul! After she tells the queens to not fuck it up, our fierce judges make their grand entrance. First, we have Canadian runway icon, Stacey McKenzie, the current reigning Queen of the North Brooke Lynn Hytes, and the super talented Jeffrey Bowyer-Chapman. Since this version of Drag Race has no formal judge, these three will be sharing duties on both hosting, and making the decisions on who will go home each week. After the judges announce the prizes for the winner of the season, Stacey announces that winter is coming. But what could that mean?

Of course, it’s a photoshoot! On the top of a (very realistic) mountain. The queens have five minutes to walk up the mountain and plant their flags. The queen with the fiercest photo wins. They didn’t tell us about that blizzard in the forecast though! Though the queens had a lot thrown at them, they all delivered in their photos. As the queens get out of drag, Jeffrey announces the winner of the mini challenge is Kyne! Brooke Lynn calls the Canadian Pit Crew in, and Stacey announces this week’s maxi challenge. It’s the classic “create a look out of items in this box” challenge, but of course with a Canadian kick to it! As Kyne is the winner of the mini challenge, she gets to choose the boxes for each queen. Kyne chooses the Yukon gold digger box for herself, and the other boxes include Muskokkurrr, Man of Green-Gaybles, Glampede, Canada Gay, and Much-Rusic Video Prance. The queens get down to creating their lewks and digging through their boxes of miscellaneous items, including various fabrics from Roots, it’s exciting to see what the queens will pull together for their final looks. I feel like these challenges are always best to get to know the queens, and I’m loving all of the nods to Canada in each theme.

It’s elimination day, and the queens enter the werk room to start preparing for their first time on the main stage. At the makeup mirrors the queens get to know each other. Out on the main stage our three judges make their grand entrance, as is our first celebrity guest host actress Elisha Cuthbert.

Finally, it’s time to see our Canadian queens on the runway, and they did not disappoint. The looks were showstopping, and quintessentially Canadian. Following the runway, the judges announce that Anastarzia, Kiara, Ilona, Scarlett, Tynomi, and Priyanka are all safe for the week. The remaining queens represent the tops and bottoms of the weeks, and it’s time for the judge’s critiques. Lemon is first with her Jock-Scraps look, and although the judges love her character and energy, the look wasn’t it. Kyne’s goldrush bellbottoms were falling apart as she walked the runway, and the judges took note. Kyne however was ready to fight for their honour. Jimbo’s Pride zipper gown was beloved by the judges, and although BOA didn’t know a thing about Anne of Green Gables, the judges adored her campy character she brought to the stage. Rita Baga served the quintessential Montreal cabaret style of drag with her Quebec themed look, and the judges loved her attention to detail, and mid-runway cheese curd snack. Juice Boxx served us cutesy mini skirt at the Much Music video dance realness, but the judges agreed it was a little basic, and a lot messy. Following her critiques Juice Boxx has a panic attack on the stage, and Brooke Lynn gives some advice queen-to-queen about the pressures of the competition.

As the queens deliberate, we get a peek at the queens backstage. Kyne makes it known that she is pissed, but I think I can speak for all of us in saying her basic gold disco look, was not it. The other queens remind her that she chose her own box, and it was her fault she didn’t bring enough personality to the stage. Following the deliberations Brooke Lynn announces that Rita Baga is the well-deserved winner of this week’s maxi challenge. BOA, Jimbo, and Kyne are safe for the week, leaving Juice Boxx, and Lemon to lip sync for their lives. 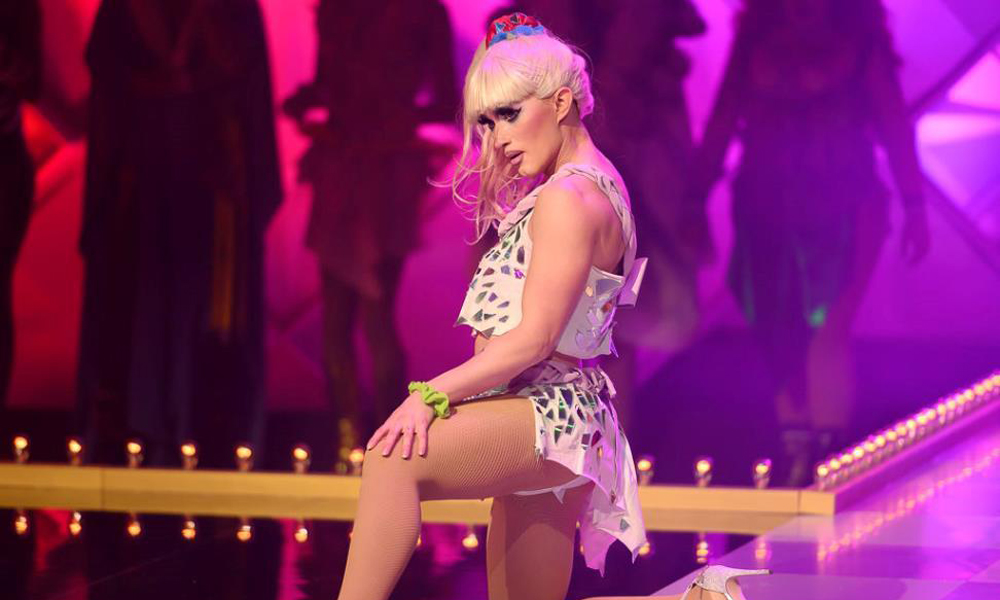 The two bottom queens lip sync to Carly Rae Jepsen’s I Really Like You, and it’s clear that both of these queens want to be in this competition. Unfortunately, a queen does have to go home, and the first queen to be eliminated from Canada’s Drag Race is Juice Boxx.

Frontrunners of the week: Rita Baga obviously, but we need to give Anastarzia’s red puffer cape the moment it deserves! The craftsmanship! Sickening!

Canadian-ism of the week: I will now exclusively be referring to Muskoka as Muskokuurr.

What we’ll see next week: The queens make their debut in an iconic Canada Her-atige Minute, and it doesn’t look like Kyne has learned her lesson about humbleness just yet…