PRIDE VOICES: On The Pow Wow Trail With Pride 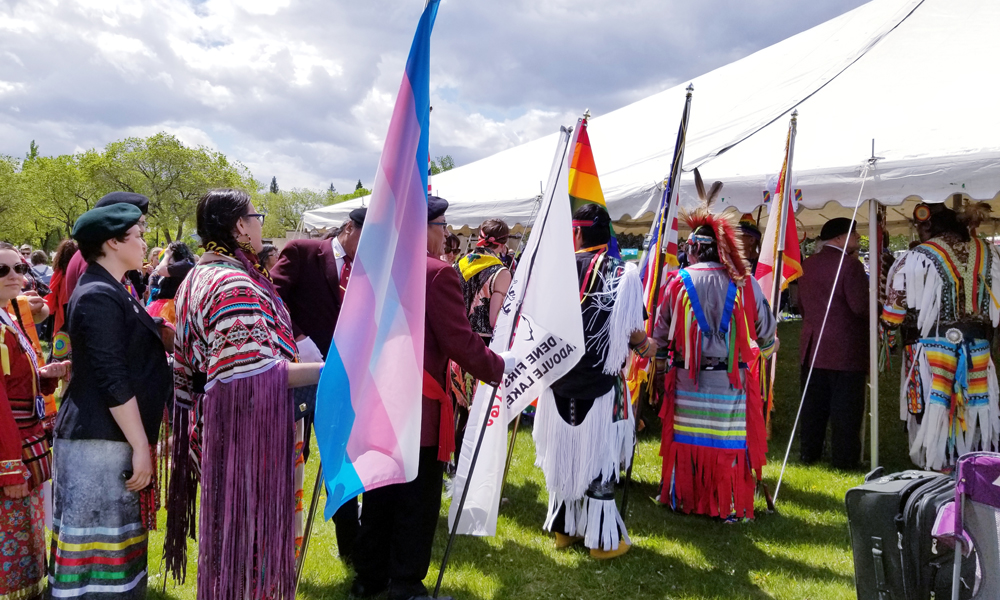 Up until the last couple of decades, Indigenous LGBTQ/Two-Spirit people existed at the fringes of mainstream LGBTQ consciousness. While Indigenous and other queer people of colour were leaders in the LGBTQ liberation movement, their contributions were rarely noted. However, the introduction of the term “Two-Spirit” in 1990 increased the understanding of Indigenous LGBTQ people living in the pre-colonial history of the Americas, and established a niche in the LGBTQ and Indigenous sectors in the modern era.

In 1975, Two-Spirit organizing was led by Randy Burns and Deborah Cameron when they established the Gay American Indians group in San Francisco. When the HIV pandemic reached American cities in 1980s, it galvanized Two-Spirit people in Canada and the US to mount a response. The Two-Spirit liberation movement began in earnest with the first International Two-Spirit Gathering, held in Minneapolis in 1988. This gathering, which continues annually today, is the cornerstone of Two-Spirit cultural reclamation and cross-border collaborations and support.

Pride Winnipeg has hosted the annual Pride March since 1987, when the inaugural march was held to celebrate the passing of Manitoba legislation that prohibited discrimination based on sexual orientation. In recent years, there were criticisms that Winnipeg’s Pride was tailored to a white cis-male audience, and that Indigenous and Queer and Trans People of Colour (QTPOC) were not fairly represented in its marketing or events. 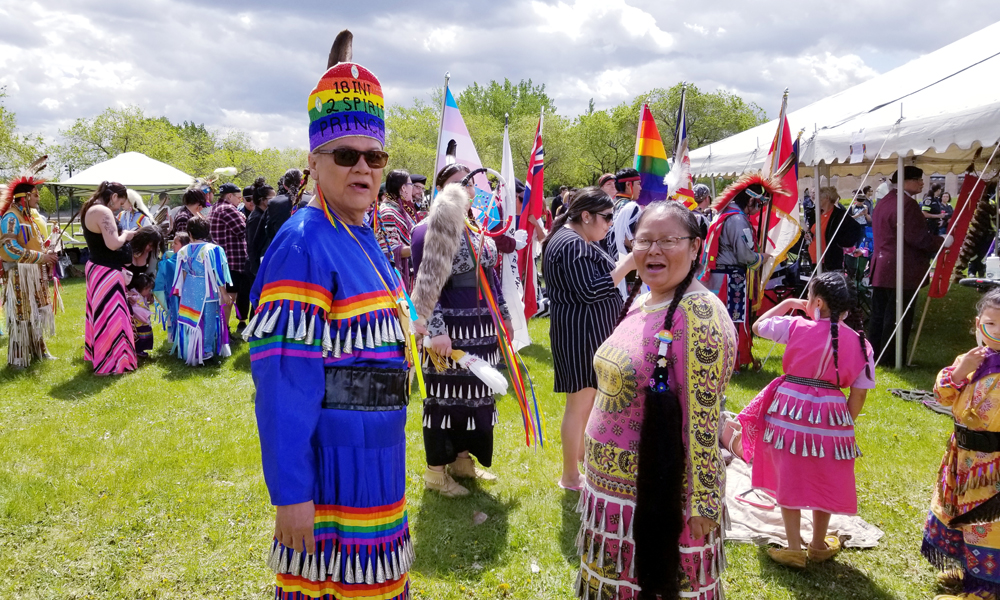 In July 2016, Pride Winnipeg hosted a community consultation to develop a five-year plan to diversify their representation and inclusion of LGBTQ people in Winnipeg. Afterwards, they began a campaign that represented Two-Spirit and QPOC people in their online promotion of the festival weekend and in their Pride Week events. That year, Gayle Pruden, a First Nation transgender activist, was selected as the Pride March Grand Marshal. Successive Grand Marshalls have also been Indigenous leaders: Kelly Houle (2017), Brielle Beardy Linklater (2018) and Peetanacoot Nenakwekapo (2019).

For Two-Spirit people, an underlying need was to have Pride represent them culturally and have events that held meaning for them. The following year, Pride Winnipeg collaborated with the Like That program at Sunshine House and the Two-Spirited People of Manitoba organization to host a Two-Spirit pow wow during Pride Week.

The term “pow wow” derives from Pau Wau, meaning “medicine man” in Narrtick, a language spoken by the Algonquian peoples in Massachusetts. English settlers began misusing the word to refer to the meetings of Indigenous medicine men, and later to any kind of American Indian gathering. American Indians have since reclaimed the term.

The first alcohol- and drug-free Two-Spirit pow wow was held on May 26, 2017 at The Forks National Historic Site, next to the Pride Winnipeg main stage and festival grounds. Since then, Two-Spirit pow wows have become a part of Pride Winnipeg’s annual celebration. At the 2019 pow wow, 10 drum groups and more than 100 dancers participated, and approximately 1,000 Pride participants visited the event.

Due to the COVID-19 pandemic, this year’s Pride celebrations, including the pow wow, have been postponed until September 4-13, 2020 and will be held in a digital format.

ALBERT MCLEOD is a Status Indian with ancestry from Nisichawayasihk Cree Nation and the Metis community of Norway House in northern Manitoba. He has over thirty years of experience as a human rights activist and is one of the directors of the Two-Spirited People of Manitoba. Albert began his Two-Spirit advocacy in Winnipeg in 1986 and became an HIV/AIDS activist in 1987. He was the director of the Manitoba Aboriginal AIDS Task Force from 1991 to 2001. In 2018, Albert received an Honorary Doctorate of Laws from the University of Winnipeg. Albert lives in Winnipeg, where he works as a consultant specializing in Indigenous peoples, cultural reclamation, and cross-cultural training. www.albertmcleod.com.