9 ‘Drag Race’ Queens That Stepped Outside Of The Box 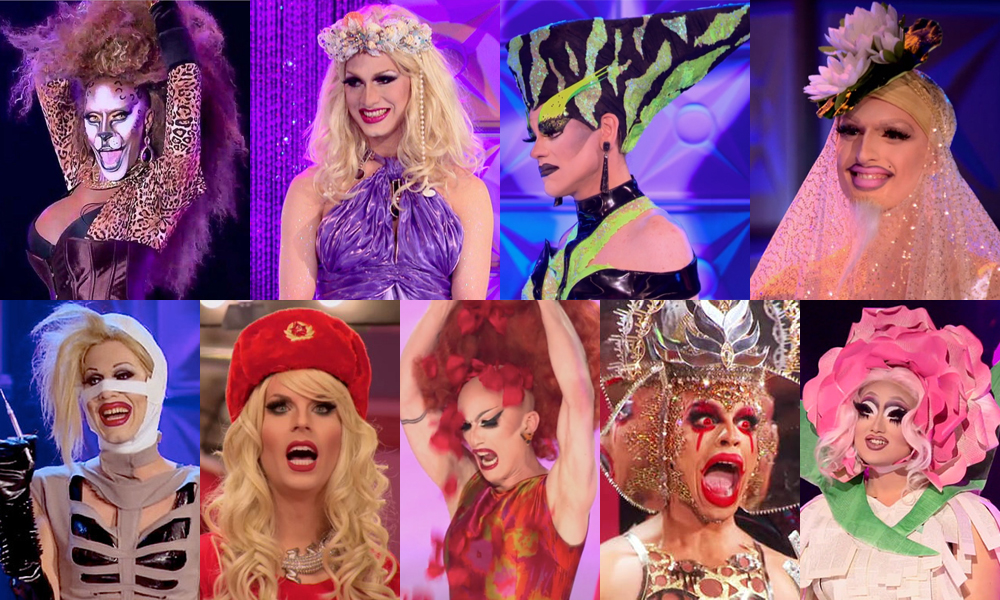 The world of drag is multifaceted, but when we think of drag queens, our minds typically go towards the glamour queens. There’s the fishy queens, the beauty queens, the comedy queens, and the club kids. But there is another group of queens that I think deserve some special recognition. They’re the queens from RuPaul’s Drag Race that stepped outside the box. They showed us that Drag can be weird and kooky, and avant garde. These are the queens that mix it up, and re-define what it means to be a drag queen every day.

Nina Bo’Nina Brown
The season nine queen was remembered for her iconic costuming, and makeup, which often took a weird but stunning turn. Who could forget her Atlanta peach look? Nina continues to push the boundaries with her mix of glam, and special effects makeup, sometimes using different elements like paper to elevate her looks, and make them multidimensional. Nina was a groundbreaker for different kind of makeup on the show, and continues to wow her fans and followers with her innovative makeup concepts.

Jinkx Monsoon
The season five winner was known for her less-polished, and eclectic style. Her style of drag really stood out in her season, especially when she shared the top spot with Roxxy Andrews, Alaska, and Detox. Jinkx’s style, mixed with her camp humour, and general kindness was a huge juxtaposition from the polished looks, and calculated game play of the other three queens. Jinkx ended up winning the crown with her authenticity, and unique approach to criticism. It’s just water off a duck’s back you guys.

Thorgy Thor
Thorgy first stole our hearts when she competed in the eighth season of Drag Race. There’s no doubt that Thorgy’s drag is different, and dynamic. Thorgy earned a spot on this list for her eccentric drag, which included not shaving her legs, and working her love of classical music, and her violin into her act frequently. We were all rooting for her during her run on All Stars 3 last year, and to be honest, we’re still pretty sure she was robbed, and doomed to fail with that Stevie Nicks performance. Ugh. Jesus. Gross.

Milk
Milk took a risk as soon as the competition started in season six wearing a fake beard down the runway, which instantly set Milk apart from the other queens immediately. Outside of the show, and drag, Milk has modeled for major fashion campaigns for Marc Jacobs, and Vivienne Westwood. Milk is even getting back to their figure skating roots, and has performed on ice in drag. Milk’s approach to drag, and fashion in general is different than the majority of the queen’s we’ve seen on the show. Whether you’re lactose intolerant or not, this Milk does do a body good.

Sharon Needles
Sharon Needles is the Spooky Queen we have all been waiting for. Sharon combines the odd with the glamorous, with the crazy, and scary to make an original and iconic look. Sure, her looks might echo Party City in October, but Sharon blend of spook and sickening, took her all the way to the top in season four. Proving that sometimes the odd and different is everything, and then some.

Katya Zamolodchikova (but your dad just calls her Katya)
I think it’s safe to say that Katya is one of the biggest fan favourites in all of Drag Race herstory. She first stole our hearts competing on season 7, and then again on All Stars 2. Katya’s look and humour are both a little off which only adds to her charm. This is mainly demonstrated on her show with fellow Drag Race alumni Trixie Mattel. On the show, Katya can often be seen sucking the life, and air out of a rubber chicken, wearing severed doll limbs as jewelry, and frequently bringing up the movie Contact. Katya is unique, and stunning, and different. That’s why the kids call her mom.

Sasha Velour
Sasha Velour IS art. That’s the only way she can be explained. Sasha’s drag is unique, and there is deep meaning behind each and every look she delivers. Her painted unibrow, and frequent choice to go wigless set her apart from all of the contestants in her season. Sasha’s drag is unmatched, and remains iconic. Her wig/flower petals reveal during the Season 9 finale was a standout moment, and one of the greatest ruveals of all time. Sasha’s drag is highly curated, and full of heart and meaning.

Yvie Oddly
The season 11 queen entered the competition setting the bar high with how much she would actually live up to her name. From remote control snakes, to full body paint, Yvie spent the entirety of the eleventh season polishing her own drag, as well as making sure her competitors were bringing their a-game to the main stage. This got her in a few fights with the other queens, but her originality and her competitive nature eventually got her to the final where she won the season 11 crown.

Kim Chi
Kim Chi’s drag is full of colour, and fun, and heavily influenced by the Korean culture she grew up in. Kim’s painted doll face, entered our screens, and our hearts on season eight, and we haven’t looked back since. Her first sewing challenge hair look was a step above the rest of the competition, every item, every outfit, every hairstyle and makeup look is meticulously planned to perfection. Kim’s complete lack of awareness to how cool and awesome she was on her season only made her more relatable, and fun to watch. Sure, she may have been one of the worst dancers in Drag Raceherstory, but her drag is so much bigger than dancing and singing. It’s art baby, and it’s stunning. Kim Chi for All Stars 5? Yes please.

Drag is an art that’s always changing, and we’re ready and excited to see how the tables can be turned. We’re ready to continuously be shocked, and wowed, and educated on how different drag can be interoperated to each person experiencing it. The future of drag is diverse, and we can’t wait to see where it takes us!