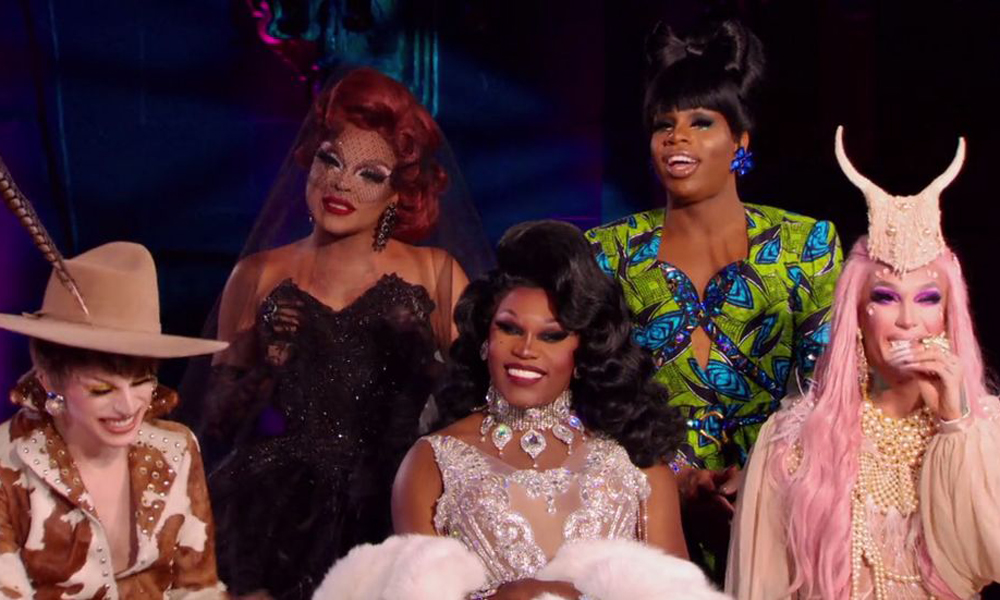 Why isn’t this called a Ru-union?…

We have officially left the werk room, and the runway for the season. This week we got to spend an entire hour with all of the Season 10 queens and go over the most gag-worthy moments, unseen clips, and best lewks from this season. Ru promised it would be a reunion like no other, and we are all ready for that tea to be spilled henny. Here are some of the best moments from the Season 10 reunion.

Vanjie…Vanjie…Vanjie
It doesn’t matter who your favourite queen was this season, I think we can all agree that everybody looks absolutely stunning this week. Even Yuhua Hamasaki, who was giving us glam Samira from the Ring realness. The reunion opens with everybody’s favourite viral sensation Vanessa Vanjie Mateo. She may have been the first queen eliminated from season 10, but she definitely made an impact and left her mark on the world of drag. “Vanjie” was probably spoken hundreds of times this season and as Miz Cracker said “It’s become gay Aloha.. Hello, goodbye, and thank-you”. Vanessa proved once again that she is absolutely hilarious, and was sent home too soon. We’ll always have “Vanjie”.

Lip Sync For Your Life
After Vanjie’s moment, Ru explained that next week’s finale would be a lip sync smack down (similar to what we saw on the season 9 finale), where the final four would battle each other until there is one queen standing who would take the crown. Speaking of lip syncs, let’s talk about some of the LSFYL highlights of the season. Dusty Ray Bottoms revealed she was intimidated going into the Nicki Minaj lip sync as Monét performs Nicki “5 or 6 times a week”. Next up Monique Heart relives her lip sync catastrophe and says she was too busy the night before working on her outfit to learn the lyrics to the Carly Rae Jepsen song for the lip sync that week against The Vixen. She stated her regret for ultimately sending herself home.

Vixen VS Aquaria, Cracker, and Eureka
After the second commercial break the tea was starting to spill because we’re talking about The Vixen and her many confrontations of the season. In true Vixen fashion she brought the drama first dragging Monét under the bus after re-hashing the whole Aquaria vs Cracker feud of the first two episodes. Monét, who is very close with Cracker outside of the competition, fiercely denied any involvement with the situation. (The rest of the girls were eating popcorn at this point and we’re living for the melodrama). Aquaria and Cracker explained there was no bad blood between them, as they agreed to move on from the drama because they didn’t want it to be part of their “Drag Race story”. Just like that the Aquaria versus Cracker chapter was closed with Cracker even jokingly saying, “Aquaria and I are like real sisters, in that we resent each other”. We love our New York City queens. 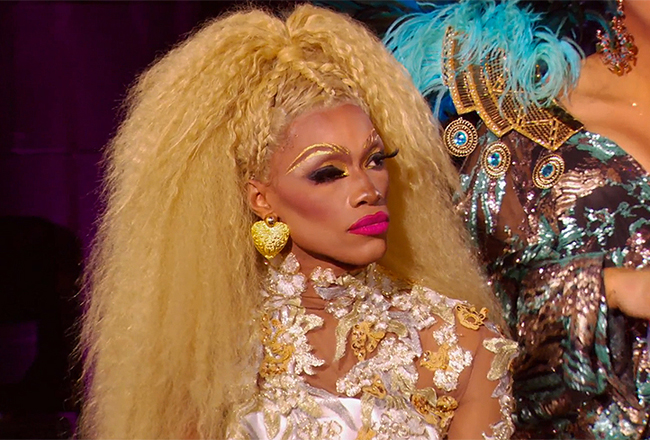 However, we aren’t even in the thick of the drama because we haven’t even gotten to Vixen versus Eureka, and of course this fight isn’t over yet. After re-watching that fight from Untucked, The Vixen stood by what she said, and Eureka said that she maybe would have gone about it in a certain way. After some fighting, Ru mothered up and told these two that they both had a choice in how they acted, and neither of them were wrong or right.. Vixen said she never started fights Ru reminded her that she announced that she “came to fight” in the confessional, and accused her of instigating arguments. Vixen thanked her fans and walked off the stage, leaving the reunion for good. Asia got emotional defending The Vixen after she decided not to return to the stage, reinforcing her role as the peacemaker through the season. Ru decided to be part of the Vixen dialogue as well in perhaps one of the most heated discussions in reunion history. Through tears, and screaming, it concluded with the decisions that yes, it is important to help our peers, but everybody has to learn how to pick and choose their battles, and when to take responsibility for their actions. Work.

Revealing hard truths on TV
Ru uses this as an opportunity to segue into Dusty Ray Bottoms’ reveal from her troubling family past. She explains that she’s found and loves her chosen family, but it sometimes just isn’t the same as your biological family supporting you. She knows she has a good life, but thinks the support of her family would just make it that much better. Next is Monique Heart with a look back at her emotional backstory reveal earlier this season on Untucked. Through tears she explained her strained relationship with both her mother and religion, and that she never truly felt herself until she started drag. Ru turns it around and reassures her that she can still be strong in her faith while still celebrating who she is.

Next up Blair St Clair talked about her emotional reveal on the main stage. It was her bravery that opened up doors for her to finally heal. She thanked her sisters, and her fans for supporting her during her path to recovery. Monét X Change and Yuhua Hamasaki both shared experiences with how their parents still aren’t fully accepted by their parents for drag, though Monét’s mother has somewhat come to terms with Monét’s decision, Yuhua explained that her parents avoid the subject completely, and it will likely stay that way.

TOOT OR BOOT
The queens rated each other’s runway outfits. Most notably booted was Monét’s sponge dress, which made appearances through the season in rogue sponges. She even brought the dress back to the stage to give Ru, which in turn allowed Ru to toot the iconic lewk. 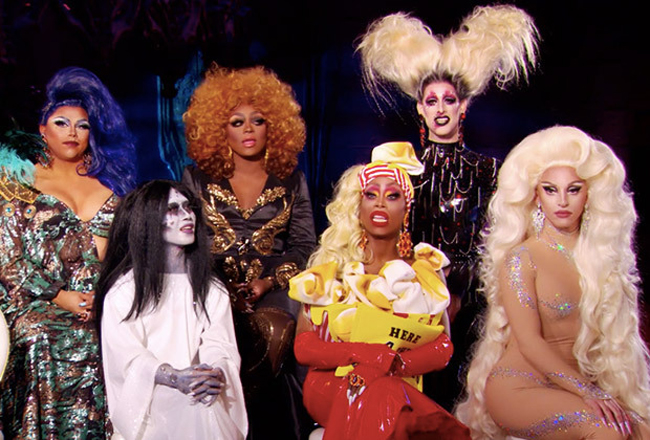 Back to the DRAMA
Cracker revealed that Asia saying that she wasn’t a star really hurt her. Asia apologizes, and says it was wrong for her to say, simply because it wasn’t true. Its clear that the two have mended their relationship as they frequently support each other on their social meida accounts. After this Ru gives the girls the floor and let them ask each other whatever they want. Mayhem takes the chance to confront Asia and Aquaria for saying that her drag didn’t have “wow factor”. Aquaria explained she was a big fan of Mayhem before the show, but didn’t think she pushed as far as she could have for the competition. In the most surprising drag of the reunion, Monique accused Kameron of being a different person on the show, than she is in real life/on social media. Kameron defended herself saying she was just intimidated by the other queens, and she is the same person at her own shows, as she is on social media. Dusty interjected saying she feels like Kameron doesn’t want a relationship with the other girls. In a very “put your hand up if you’ve ever been victimized by Regina George” moment, almost all of the girls raised their hands in agreement with Dusty. I didn’t expect this from Kameron, and I’ll be honest, it’s a little disappointing.

After one last trip to the library, Ru asks the queens who they think should win out of the top four. The voting went as follows, three (and one Miss Congeniality vote) for Aquaria (you go Aquaria!), three for Asia O’Hara, and three for Eureka. Oh, and none for Kameron Micheals (not shocking after that last reveal).

Takeaway from the reunion:
Vanessa Vanjie Mateo was taken from us too soon, and we deserved more of her. Excuse me while I go get “Vanjie Forever” tattooed somewhere on my body.

Most surprising tea of the season:
Kameron not being as genuine as she was made out to be through the whole season.

What we’ll see next week:
The winner of Season 10 will be crowned through a series of lip sync battles!