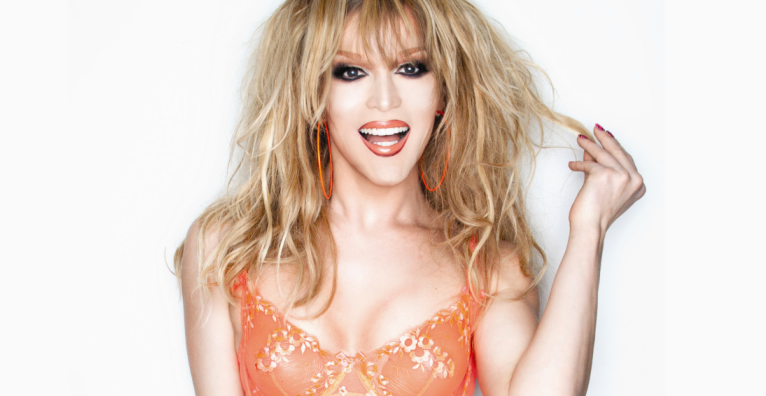 She might have been disqualified from RuPaul’s Drag Race season four, but drag performer Willam Belli knows a thing or two about staying in the game…

The Los Angeles-based actor first gained mass acclaim for her recurring role as the transsexual Cherry Peck on the cult drama Nip/Tuck, and from there went onto booking an impressive list of TV appearances on shows like CSI and The New Normal. She’s a founding member of the drag pop group DWV, and now she’s preparing for what some Torontonians might call her most anticipated premiere yet: Toronto Pride.

IN Magazine caught up with the drag sensation via email to talk about her appearance on Drag Race, her first Pride, and why so many Drag Race alumni are coming to Toronto.

Other Drag Racers will be at Toronto Pride (Jinkx Monsoon, Jiggly Caliente, Shangela, to name a few). Is it customary to hang out with Drag Race alumni when you appear at the same festival?
We rub fine oils on each other’s bodies and prank room service calls to each other’s rooms. Jiggly is usually cool with it.

This year we have more queens from Drag Race in town for Pride than ever. Why do you think Toronto is on people’s radar?
I think our manager is a smart man who likes a group rate. All the girls that don’t win Drag Race are forced to prostitute and throw mouth parties in their hotels.

Looking at all that’s happened in 2013 – particularly on the human rights front – what LGBT issues are important to you today?
I LOVE Bullying!

What was your first Pride like?
My first pride was in LA. They said there would be funnel cake. There wasn’t funnel cake.

Tell me was it was like being on Drag Race. You were disqualified in season four for maintaining contact with your husband during production, which broke show rules. Would you have done anything differently if you did it again?
Game shows are awesome. I would have sucked more dicks and actually told people the real reason why I got kicked off. Get me drunk enough and I will in person.

How did your experience on Drag Race differ from other television gigs you’ve had?
It was different from what I was used to working on. This set was rife with untaped wires underfoot, non-regulated food breaks (like $75 to feed 12 men after a 14 hour day). Sharon subsided on bread dipped in ranch for a month while filming because her vegetarian food needs were never met. Major safety issues and human rights violations that any union rep woulda shit themselves over.

But it was one of the most fun experiences of my life that I was lucky to partake in. Mainly because I knew I wasn’t going to win. I had no stakes. Beautiful, successful people doing well for themselves don’t make for good TV unless they’re bitches PLUS we knew that Sharon was being pulled for. Just like how Mariah wrote “Congratulations Raja” on the mirror when she sashayed away (which was then erased but visible in the wide shot).

The “story producers” are actually kinda like writers without the benefit of Writer’s Guild Insurance. It’s a GAME show. BUT again, I had a lot of fun because my motto was “it’s easier to say “Sorry” than “May I.” Other girls would start to ask questions and I’d be like “STFU!!! Don’t give them the opportunity to say No.”

I knew what I was getting into. I complained each time I didn’t like something and if it wasn’t fixed, I just drank or smoked some weed (which was handily sold to us by a crew member Kenya and I liked to show our asses to). Hell, even this season when they cracked down on the contestants security after my shenanigans, one of the top 3 girls smoked out with a producer who likes to collect the queens as friends like trading cards. That producer is still employed by them despite blasting me in social media and dressing in a way that I could only say emulates the dancing Fantasia hippos complete with ratty wigs.

It’s a weird dichotomy- feeling like you need to be nice to powers-that-be people to advance in a competition/show instead of just being good – and it’s also a dichotomy I refused to play into.

You’re a member of the group DWV, which is known for its music video parodies like “Chow Down” and “Boy is a Bottom.” The videos have tallied millions of hits on YouTube. Did you anticipate your group would have such a viral impact?
No. I thought it would be entirely bacterial.

Your fans have stuck by you post-Drag Race. What’s the key to staying relevant?
My only job is to entertain. Every tweet, every answer to every interview, every time I open my mouth I remind myself that I am simply but a novelty who’s purpose is to entertaint. YES. Taint.