Home / Entertainment  / A Definitive Ranking Of All The Musicals On RuPaul’s Drag Race [UPDATED!]
Entertainment Latest

A Definitive Ranking Of All The Musicals On RuPaul’s Drag Race [UPDATED!]

Because who doesn’t love a musical…

The last several seasons of Drag Race have given us the gift of “the Rusical.” Whether they’re performed live, or lip-synced, the musicals have become iconic challenges of the drag race competition that can make or break a queen’s run on the show. Whether your fav kills the performance, or forgets the words, the Rusical is a staple competition that fans look forward to each season. If we’re lucky, some performances become so iconic we get to talk about them years later.

Here is the definitive (and updated) ranking of all of the musicals on RuPaul’s Drag Race. 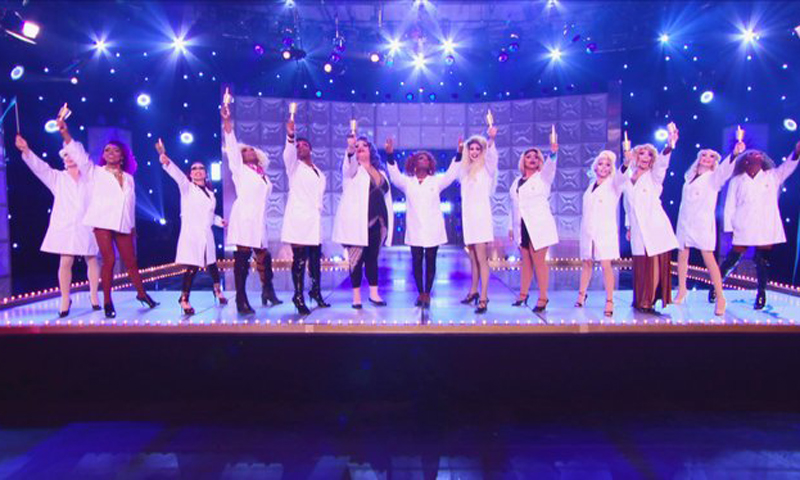 11. PharmaRusical (Season 10)
PharmaRusical included a big cast as it was only in the second episode of season 10. The dancing was ambitious but the actual musical lacked any substance, and a storyline. It jumped back and forth between different made up prescription drugs, and to be perfectly honest, we’re still a little confused as to why this was chosen as the season 10 Rusical. At least we got redemption with that Cher musical later on in the season. But more on that later…
The musical’s saving grace: Aquaria making a pixie wig look chic. 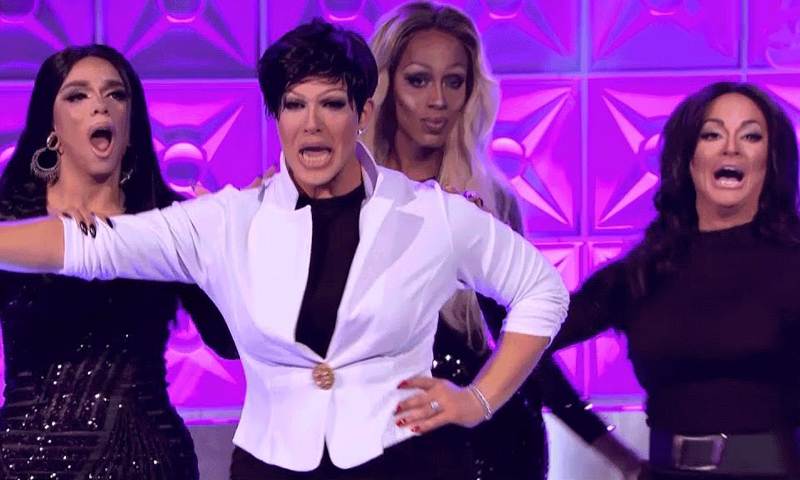 10. Kardashian the Musical (Season 9)
Kardashian the Musical had potential to be one of the greats, and there were a few queens that made this musical bearable. When it came down to it, Cynthia Lee Fontaine being cast, as the lead Kimberly Kardashian was the biggest downfall. Cucu barely knew the lyrics, the costume was wrong, and the choreography was sloppy. This musical also featured Eureka O’Hara on crutches, as North West in the year 2080, and we’re still wondering why.
The redeeming factor of this Rusical: Peppermint as Britney Spears, Shea Coulee as Blac Chyna, and of course Alexis Michelle as momager Kris Jenner. You’re doing amazing sweetie.

9. VH1 Divas Tribute to RuPaul (All Stars 3)
This was another Rusical that had potential to be great. Our favourite Queens impersonating our favourite divas… Literally nothing could top that. Unfortunately VH1 Diva’s featured some queens having a bit of an advantage over others, which made a lot of Drag Race fans upset. For example, Trixie Mattel was cast as country/folk diva Dolly Parton (a perfect tailor made choice), and Shangela was given the role of Mariah Carey, complete with comedic beats intersecting her singing. Meanwhile, BenDeLaCreme was cast as Julie Andrews (yes, you read that right), granted, Dela did a fantastic job. However, the real tragedy was Thorgy Thor being cast as Stevie Nicks. She was then ripped apart by the judges for painting her face “too much like Thorgy”, and not being funny enough. Because as we all know, Stevie IS the comedy queen of the classic rock genre. This of course resulted in fan favourite Thorgy being sent home that week, and she called it too. Jesus. Gross.
Most confusing critique of this performance: Thorgy being read for doing Stevie’s makeup like Thorgy, but Trixie being praised for her Dolly Parton impersonation, which included makeup looking very much (you guessed it!) like Trixie.

8. Trump the Rusical (Season 11)
This rusical came at a particularly tense time in politics, and while it was poignant with its use of Ginger Minj as the Cheeto president himself, it just wasn’t it. Trump the rusical was essentially Grease but instead of Sandy, Danny, Rizzo, and Frenchy, the characters were some of the worst people in the world. Silky as Oprah as Teen Angel was a fantastic touch that really elevated this musical. Brooke Lynn Hytes and Plastique Tiara as Ivanka and Melania Trump were great casting choices too, but other than that, this musical wasn’t really serving me much more. The choreography was good, and the musical had a great message overall, even if it took us a while to get there. I found it dragged a bit, but the dancing, and acting was good enough to not put it at the absolute bottom of this list.
What saved this Rusical from the absolute bottom: Silky as Oprah. I only say this because it was surprising that the best character in this musical had nothing to do with the subject of the musical. 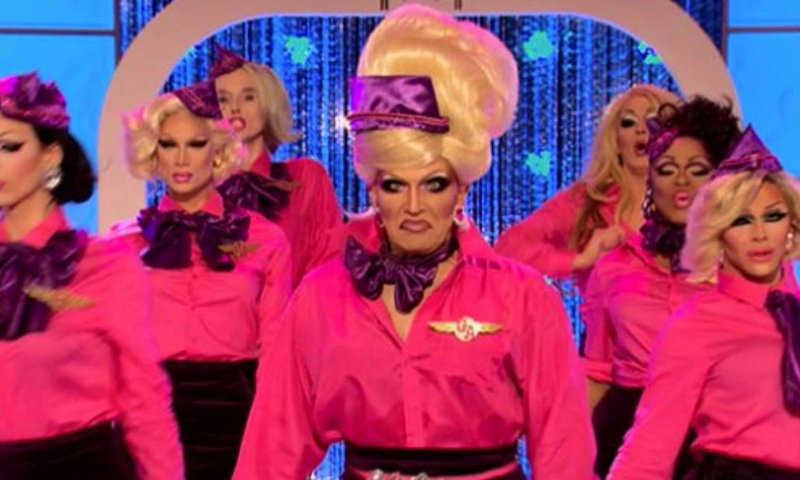 7. Glamazonian Airways (Season 7)
This one was kind of all over the place. Katya didn’t know the words to her lengthy, and fast monologue, and Trixie was in a brown wig (what?). Though the fast, and busy lyrics made it entertaining to watch, and the songs were catchy enough to get stuck in your head for a few hours, ok days, is why Glamazonian Airways lands in the middle of the list.
Standout moment: Violet Chachki being wound and bound by seatbelts to show off her teenie tiny waist. 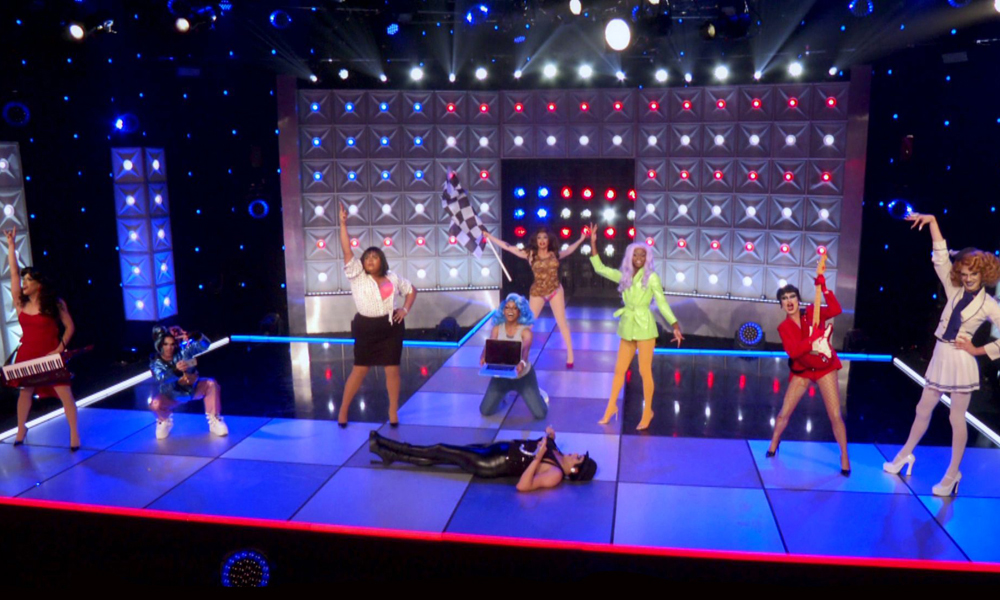 6. Social Media: The Unauthorized Rusical (Season 13)
If it weren’t for a couple of the queens giving us absolutely everything in this Rusical, it would have been ranked a few spots lower. Nevertheless, Social Media: The Unauthorized Rusical continued the newer tradition of having the queens record their own vocals for the performance, which did make it more enjoyable. Much like the Kardashian Rusical in season nine, this one had potential to be incredible, but when it came to the lackluster performance from the majority of the queens it kind of fell flat. Rosé’s knockout performance is what saved this musical from a lower spot. Social media is bad… blah blah… it’s dividing us… blah blah. I’ll be honest, I was kind of bored until Gottmik and Denali made their grand entrance as Russian twin hackers.
The ones who could have done better to save this Rusical: Symone and Elliott with 2 Ts were giving us very Gen Z flazéda with their performances of Instagram and TikTok respectively. I get what they were going for, but it came across as boring and uninterested. Sorry I said what everybody was thinking. 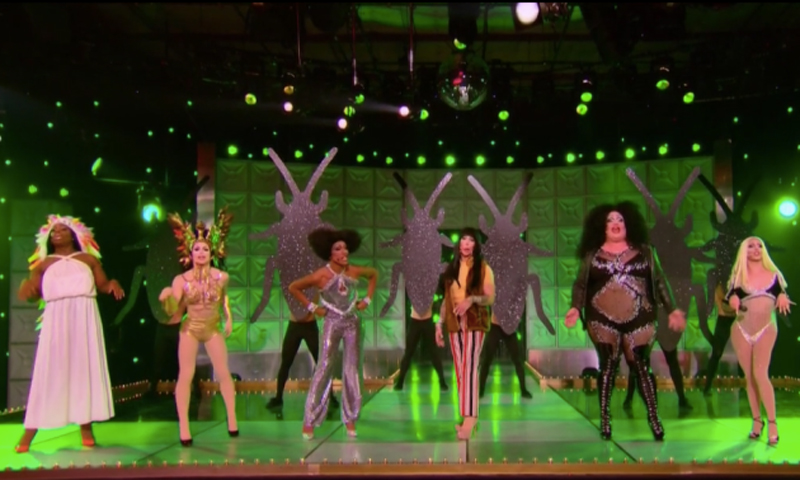 5. Cher: The Unauthorized Rusical (Season 10)
Season 10 gave us not one but two Rusicals. However, not all RPDR fans consider this to be a standard Rusical because it was quite late in the season, and didn’t included as many contestants as they usually do. Cher: the Unauthorized Rusical lands in the top half of this list based off ambition alone. Instead of the standard lip sync, the queens were required to sing their tributes to Cher, live. Whether their performances were good or bad, everybody gets an A for effort for their attempt at live theatre.
Musical highlight: Kameron Micheals killing a Cher impersonation… oh did we mention she could sing live too? 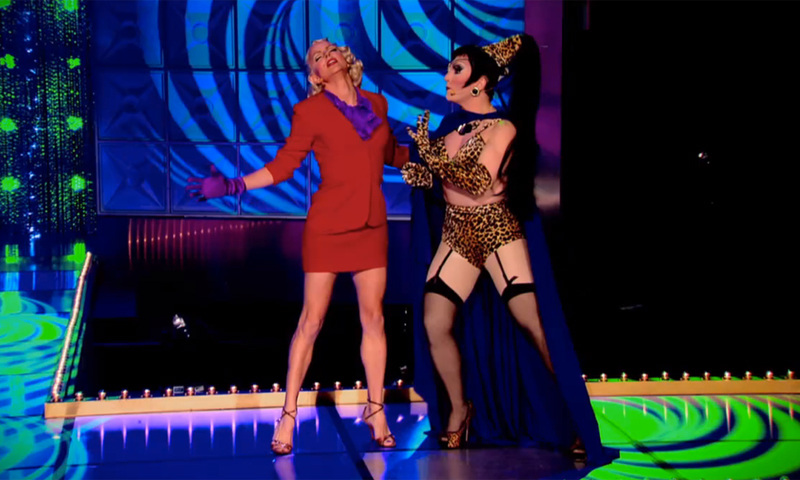 4. Shade: the Rusical (Season 6)
Most consider this to be the original Drag Race Musical, and Shade: the Rusical had it all. Live singing, a clear, and fun storyline, and two formal idol contestants. Courtney Act, and Adore Delano lead this musical to victory, as well as other key players that really shine in minor parts. Season six winner Bianca Del Rio was hysterical as one of the “beauty queens”, and BenDeLaCreme was sensational as the shady queen, and narrator of the first act.
Most memorable prop: The bedazzled fish filled with fish oil. 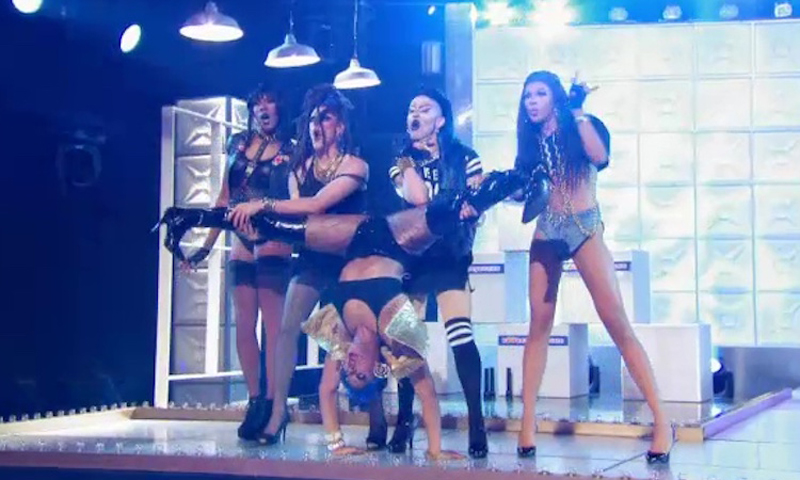 3. Bitch Perfect (Season 8)
Bitch Perfect ranks high on this list because it’s so different than any of the other musicals that have ever appeared on Drag Race. Based off of the hit movie Pitch Perfect, Bitch Perfect was a simple riff-off in the “Boobs for Queens” warehouse. The drag-apella covers of RuPaul’s original songs were catchy, fast paced, and overall fun to watch. Who could forget Kim Chi using her lisp, and inability to dance to her advantage, and the length of Naomi Smalls legs in those shorts, you know the ones. Even Cynthia Lee CUCU made it through the lyrics in this one, a whole year before she would sabotage Kardashian the Musical.
Best use of choreography: ChiChi DeVayne doing the splits upside down. 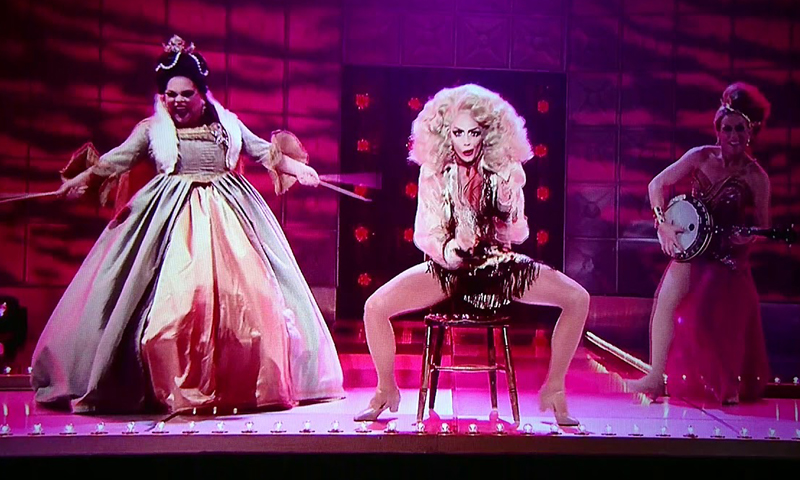 1. Michelle Visage playing God with a Jersey accent
2. Roxxy Andrews being the only queen to perform the whole musical in 6 inch stiletto heels
3. Alyssa Edwards as Annie Oakley

Every single one of the queens killed their performances in this musical. Even though Katya was later read for her interpretation of Princess Diana, gave a stellar performance. I would argue however, the star of the show to be none other than Miss Alyssa Edwards as Annie Oakley. Her part of the song still gets stuck in my head from time to time, and I still have visions of her rolling around the werk room with that bedazzled pistol.

1. Madonna: The Unauthorized Rusical (Season 12)
Though All Stars 2 delivered what remains as the most iconic rusical in the show’s history, I’ve got to give the top spot to the newest season’s musical, and true ray of light to the rusical list, Madonna: The Unauthorized Rusical was not only the best show put on by queens musically, but every single queen nailed both their lip syncing and choreography. The solo parts were actually recorded by the queens (which we got to watch in the episode), which made for a more believable, and real musical experience. Performance aside, the lyrics were really well written. The show started with a bang with Jan, and even the queens who didn’t feel strongly about their performance abilities delivered. Gigi and Jaida both really captured Madonna’s essence in their parts, and Crystal put her own fun spin on her Madonna era. It gave us just enough that covered the very basic, and best parts of Madonna’s astounding career, and left me listening to her greatest hits for hours after the episode finished.
Most memorable Madonna: Watching Gigi Goode spin and flip on stage had me forgetting she was the only queen not playing the part she wanted the most. She was so good that at times I forgot I was watching a drag queen impersonate Madonna, she was THAT Goode.

It seems that with each season the musicals get bigger and bolder, and with the newest one being the best, we can’t wait to see what the future seasons of Drag Race hold, and can only hope for more daring, ambitious, and original rusicals. And if they don’t, we’ll always have Madonna.