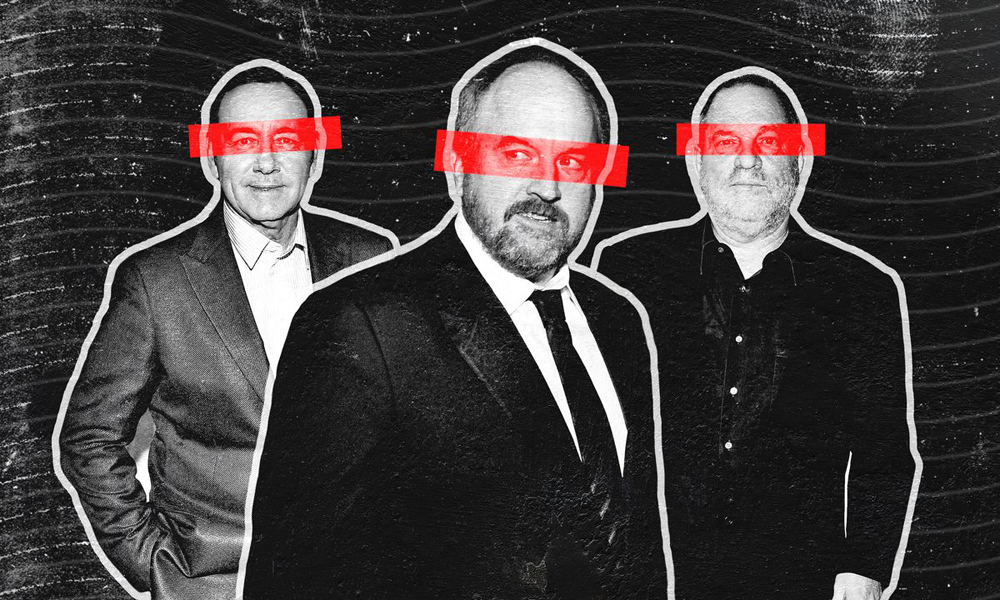 Hollywood's Sexual Predators Remind Us Of A Scary Reality

In the past couple of months I’ve heard a few gay men—usually over the age of 45—suggest that they wished Kevin Spacey, or someone like him, had made sexual advances on them when they were teenagers. I take these comments as pure fantasy, like a claustrophobic’s declaration that he’d like to be an astronaut. These guys have retrospectively xated on a moment they imagine to be pleasurable, with no thought about how traumatizing everything around that moment would be. It’s hard to imagine women being so blithe; they have to negotiate sexist shit every day of their lives.

Let me be clear: sexual assault is sexual assault, and no means no. And unfortunately—as demonstrated by the rash of stories of Hollywood sexual predation by the likes of Spacey, Harvey Weinstein and Louis C.K.—power seems to obliterate the need for consent. But there’s something fundamentally different about how gay men, in particular, process these stories and experiences. One of the great things about same-sex relationships is that they lack the gendered power imbalance that permeates straight relationships, sometimes to the point of toxicity. Men with men, and women with women, can be less fearful about how badly a sexual experience might end up. Some might argue that men, including gay men, are simply wired to more easily shake off unwanted and unpleasant sexual experiences. (That might be true of some men; I’m not telling anybody what their feelings are or should be.) But there’s also something about growing up LGBT that puts us at a much higher risk of being sexually exploited, while simultaneously creating an environment that encourages us to compartmentalize it and normalize it. And that’s no pleasure at all.

This might start with the feeling when we’re young that there is normal sexuality and abnormal sexuality, and that perhaps, based on comparisons to our peers and role models, we fall into the latter category. Particularly for those raised in conventionally religious families, this divide can feel absolutely black and white. If you’re on the ‘wrong’ side, you’re damned by default, with no framework to distinguish homoerotic longings from being a menace to society.

I’ve written before about the joy and power LGBT people have in being able to create our identities and relationships as we see t. The problem is that, especially when we’re young, there may be other people who see this freedom as a vulnerability they can leverage. Already feeling like freaks, we may lack a sense of what a good romantic or sexual experience should feel like. As people who have had to discover our own sexuality—perhaps we failed to notice that we were unconsciously gazing at someone in the locker room until we were mocked for it—we accept the possibility we might unconsciously be sending out signals according to desires we don’t fully recognize in ourselves.

Then, once we’ve gured ourselves out, we face the prospect of the closet. Having one’s own secrets, however innocuous, means feeling obliged to keep secrets for others—even when we shouldn’t. From the con nes of the closet, imagine saying “He forced sex on me” when it feels impossible to even say “I’m queer.” Although LGBT people these days have been coming out at younger ages than in the past, and to more welcoming families and communities, even a short period of non-disclosure can leave someone feeling exposed and vulnerable. And some career choices can force otherwise “out and proud” people back into the closet. Justin Trudeau’s apology this fall for the Canadian government’s decades-long witch hunt against LGBT people in the civil service, military and RCMP shows just how nasty the world can be. Until very recently, professional sports didn’t even pretend to be gay friendly.

And then there’s the entertainment industry and the current avalanche of sexual assault revelations. While Hollywood has built its brand on liberalism and self-actualization, it has long maintained an omertà code around homosexuality. Although typ- ically presented as a case of “audiences don’t believe/like openly gay and lesbian actors in straight roles, and they don’t like gay and lesbian roles very much either,” one suspects the Celluloid Closet was created for the very purpose of exploiting fame-starved young people. With so many aspiring actors seeking so few roles, and suitability so terribly subjective, LGBT talent has few escape routes from the casting couch.

Actor Anthony Rapp, the rst (but probably not the last) gay man to make allegations of sexual assault against Kevin Spacey, didn’t tell his mother that the actor had drunkenly crawled on top of him when Rapp was 14 and Spacey was 26. Why? Rapp didn’t want to come out to her. When Rapp, now 46, rst started mentioning the incident in public, he didn’t name Spacey, respecting the community’s convention of not outing people.

“It was this thing that happened, and I locked it away,” Rapp told BuzzFeed this fall. A practice meant to grant LGBT people respect and self-determination had, in Hollywood, become a form of impunity.
In ippant conversations among bar friends (perhaps against a backdrop of drag queens saying offensive things to be funny), we might turn painful encounters with sexual predators into campy stories, mixed in with stories about, say, dates who had unexpected fetishes. These stories seem to t into the category of things we can say in the queer community, but not at work or with family or people whose esteem we hold dear. But they are not the same as the weird date story—that’s the lesson we’re learning from the brave women who are revealing their own traumatic experiences at the hands of public cures.

I’m not suggesting that the world is full of sexual predators or that every unwanted touch is rape. There’s a range from those who purposefully dedicate themselves to manipulating and abusing others regardless of the consequences to the other person, to those who make momentarily drunken mistakes and then immediately stop. There’s what’s illegal, what’s unethical and what’s merely gross. There is the sex we de nitely want, the sex we de nitely don’t want, and the territory between the two. The existence of a grey area doesn’t mean there are no boundaries at all. It means we need to be completely shameless in our communications about sex: before, during and after.

PAUL GALLANT is a Toronto-based writer and editor who writes about travel, innovation, city building, social issues (particularly LGBT issues) and busi- ness for a variety of national and international publications. He’s done time as lead editor at the loop magazine in Vancouver as well as Xtra and fab in Toronto.