The queens get messy on a late-night talk show improv challenge, and “bead it” on the runway on the main stage…

Last week following a crash course in Disco, we said farewell to the legendary, and now iconic Tamisha Iman. Although many fans were disappointed she left the competition so soon, it’s obvious even in her short time on the show she will live as one of the most iconic queens to ever grace the Drag Race main stage. This week the queens are trying their hand at improv, which any long-time fan of the show will know, is usually one of the most difficult challenges in the competition. Let’s get into it.

This week’s episode starts in the werk room following Tamisha’s elimination. Kandy is feeling a little guilty for sending Tamisha home following their weeks long feud. Over on the couches, the queens congratulate Olivia on her first win of the season. Tina relishes in the fact that she’s finally broken her safe curse, and Elliott realizes anybody she’s ever been in a group with has since been eliminated. Elliott is already feeling isolated. Will this newly discovered curse continue to drive the other queens away?

It’s a new day in the werk room, and all of the queens are having strange dreams in their hotel rooms. Ru enters the werk room and introduces this week’s mini challenge. I hope you’re ready because the library is officially open for season 13, and the queens are not holding back. 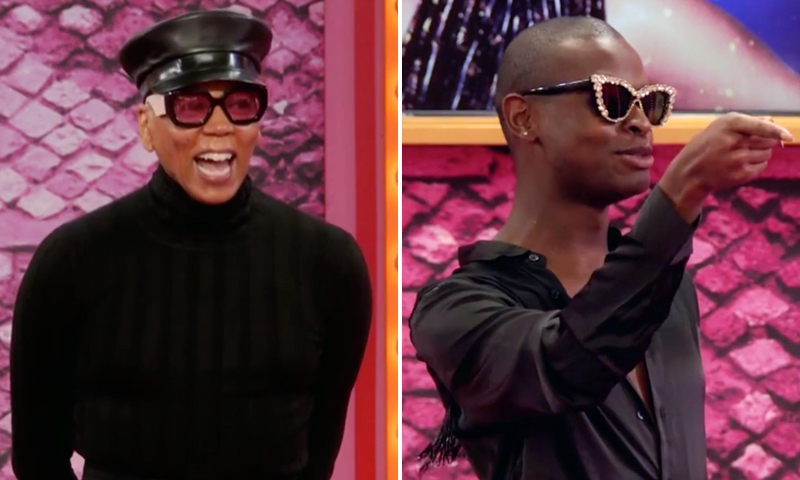 After reading each other to filth Ru announces the winner of the reading challenge is Gotmikk. Following the library closure, Ru tells the girls that for this week’s maxi challenge the queens need to improv for their lives on a fake reality show hosted by Ross. Ru assigns the segments at random, and the groups for the challenge are set. Some of the queens are excited for their time to shine with improv, while others are reasonably nervous. Improv is not easy, and it’s not for everyone. After watching that reading challenge, a few queens should be worried. All I’m saying is I wish Elliott the best of luck.

This improv challenge doesn’t have scripts, so the queens get to work reading the concepts for their segments and work out who they will each play. Kandy is nervous about making her character different from the ones she’s already performed as it was a big critique from the judge’s last week. LaLa Ri and Denali both flopped in the acting challenge a few weeks ago, so they’re using this as an opportunity as a redo. Utica was in an improv troupe in her hometown, so she’s feeling good about this challenge. This either means that she’ll be outstanding, or fall short, and it’s usually the latter. Utica and Olivia fight over the same character in their segment, with Utica wanting the silent role that requires a lot of physical comedy. Olivia also want’s the mime role to challenge herself and show the judges something different. After some strategy straight out of the Shangela gameplay manual, (that Tina sees right through) Olivia ends up with the silent mime role. 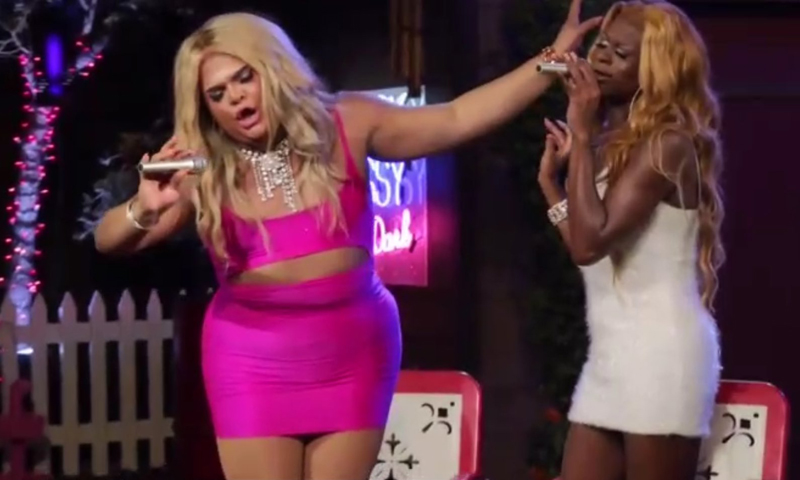 It’s time for Ross’s backyard talk show. The first group out is Rosé, Denali, and LaLa Ri. This segment was giving me an afternoon episode of Maury in 2002 that you watch when you’re home sick from school. The other queens who are watching live via a screen backstage, notice LaLa isn’t giving as much to the scene as her scene mates. Will this send her to the bottom this week? The next group on Ross’s show is Gottmik, Olivia, and Utica. Olivia absolutely slays in her nonverbal role. Surprisingly, it’s Utica who doesn’t really get her character right for the challenge. The judges love Utica, and as long as her runway look is good, she’ll most likely be safe. Next out is Kandy and Symone, playing teen reality star has-beens. Kandy is taking the judge’s critiques and playing a totally different character. It’s different, and not as loud as we’re used to seeing from Kandy, but it’s kind of working for her in this challenge. Symone also delivers a strong performance in this challenge. The two were well balanced, and the scene was good. It’s time for the final pairing of Tina and Elliott to take the stage. Tina and her ass pads are out first, and immediately is ridiculous and over the top. Unfortunately, Elliott’s performance falls a little flat compared to Tina even though they really pulled it together at the end. Will this land her in the bottom for the week?

It’s elimination day in the werk room and as the queens prepare for their runway looks, they anxiously await critiques on their improv performances. Symone is second guessing her performance (even though we all know she did pretty well compared to some of the other queens). Symone opens up to the other queens about how hard it was watching her older brother go to jail as a child. Meanwhile, Elliott is feeling like her performance didn’t live up to her partner’s. Elliott confides in Tina that her depression makes it hard for Elliott to open up and be herself in order for the other queens to get to know her. Over by the mirrors, the queens decide to re-enact a paternity test scene from Maury. Out on the main stage Ru introduces the judges, and this week’s special guest Ts Madison.

Out on the runway the category is “Bead It”. The queens slay in beaded looks, including Denali dressed as a chandelier, Kandy in nipple tassels, Elliott in a beaded flapper look, and Gottmik dressed head to toe in red anal beads. Werk. Ru announces Tina, Gottmik, Denali, and Rosé are all safe for the week. The judge’s critiques start with LaLa Ri. They like her runway look, but Michelle noticed a rip on the side of her nude illusion bodysuit. Ross says LaLa kind of blended in with her scene partners in the challenge, but still delivered a few memorable moments. The judges loved Olivia’s performance in the challenge, as well her beaded look, which took a different approach to the beads than anyone else on the runway. Ross loved Utica’s bloody bride runway look but didn’t love her performance in the improv challenge. Michelle was pleasantly surprised with Kandy’s performance, as well as her runway look. They recognize that Kandy has taken the critiques and applied them to her performance. The judge’s absolutely loved Symone’s runway look and commended her performance in the improv challenge. Michelle tells Elliott that she has never looked more beautiful than she does right now on the runway, but they all agreed that Elliott’s performance in the improv challenge was a bit dry.

Following the judge’s deliberations, Ru announces that while Olivia, Kandy, and Symone were all the clear tops of the week, Olivia takes the top prize for the second week in a row! Kandy, Symone, and Utica are safe for the week, leaving LaLa Ri, and Elliott up for elimination. The two bottom queens lip sync to “Whole Lotta Woman,” by Kelly Clarkson. Both LaLa and Elliott are bringing their everything to this lip sync, and the beads are WORKING FOR THEM. After an entertaining, and very sparkly lip sync, Ru announces Elliott with 2 Ts is staying in the competition, while it’s the end of the road for LaLa Ri on season 13. We’ll miss you LaLa! 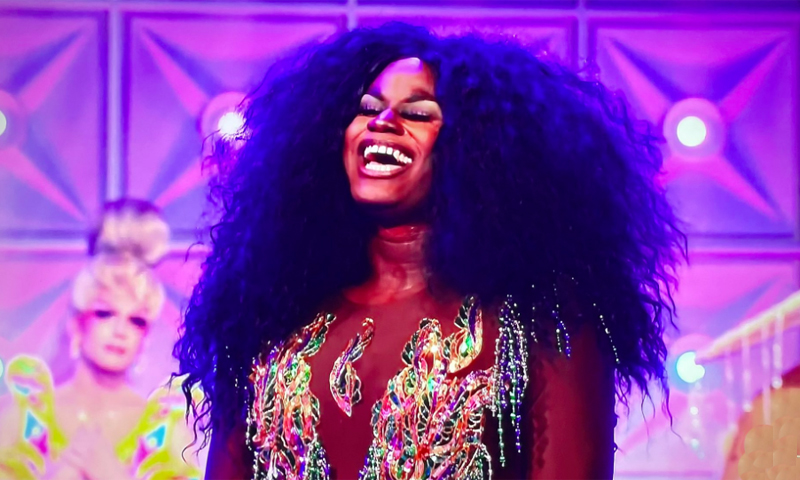 Front runner of the week: I told you that Olivia Lux would continue to surprise us, and I would just like to say once again I am correct. Can she keep it up and ride this wave straight to the finale?

Missed recognition of the week: Symone has been delivering top teir looks week after week, but some of y’all (the judges) aren’t ready for that conversation.

What we’ll see next week: A video message from the current reigning queen of Genovia Anne Hathaway, and the queens bring it all to the stage with this season’s Rusical!