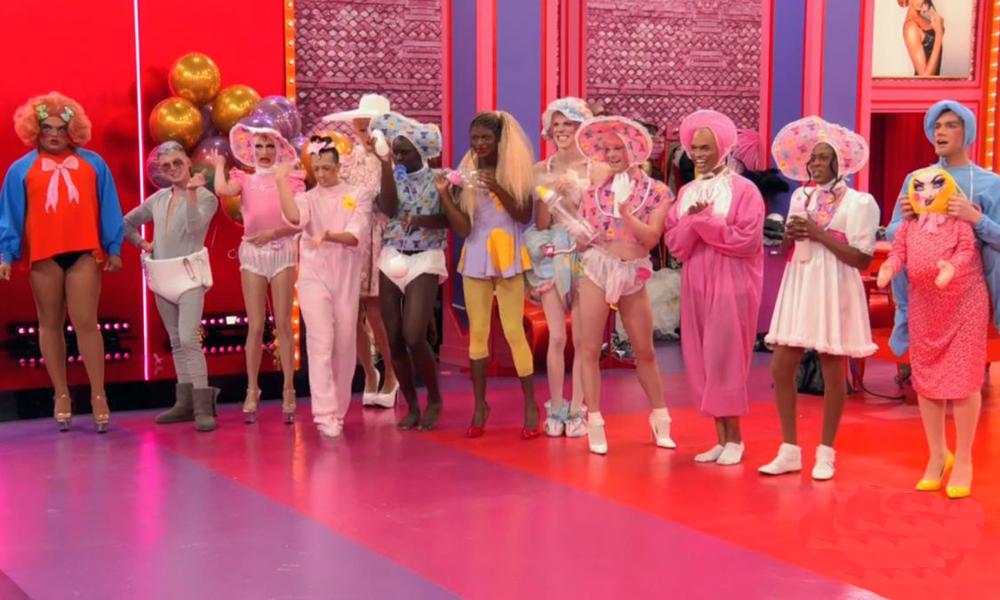 The queens pull all the tricks out of their bags, and deliver 36 looks on the runway for the season 13 ball…

Last week after season 13’s first acting challenge, we said goodbye to Kahmora Hall, the Mackie Doll as she became the first queen to be eliminated this season. This week, we’re all going to a ball, and as any fan of Drag Race knows that not only are the ball challenges legendary, but they are also the most entertaining to watch. I don’t know about you, but I can’t wait to see what extraordinary looks are constructed, and which queen uses a glue gun and a prayer to put their look together. Let’s get into it!

We start the episode off in the werk room following Kahmora’s elimination. As the queens see Kahmora’s lipstick message on the mirror, the reality of the competition is sinking in, and those who were in the bottom never want to be there again. Over on the couch, Kandy says Elliott should have been in the bottom instead of the other queens. Elliott bites back, but Kandy continues on and somehow finishes on how Symone is her biggest competition. Miss Tamisha Iman disagrees, and tells Kandy that her biggest competition hasn’t been identified yet because it is simply too early in the competition to be making those claims. In confessionals Tamisha has made it very clear that she’s not fond of Kandy, it’s the arrogance for her. I’m sure this drama will be elaborated on in future episodes. 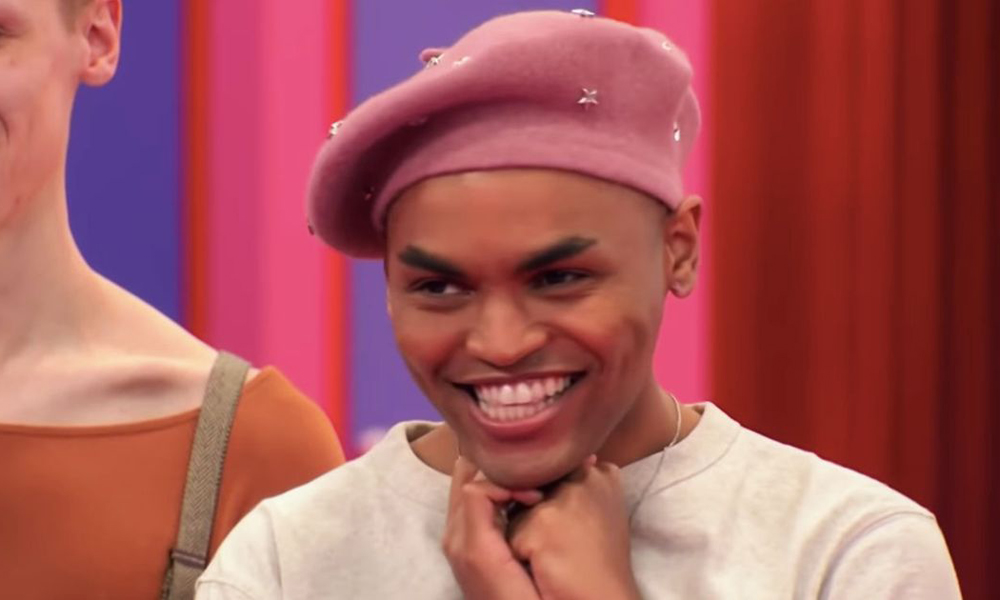 The next day in the werk room the queens gather around the table. Ru enters, and tells the queens he’s throwing a birthday party, and for this week’s mini challenge the queens must get into quick baby drag and dance it out like toddlers on a stage. LaLa Ri wins the mini challenge, and Ru announces that this week’s maxi challenge is a ball. Each of the queens must come up with three different looks for the runway. The first look category is “Mixed Bag”. The queens must deliver a punny look which must include the word bag in its description. Look number two is “Money Bags” think…businesswoman special. The final look must be a high fashion ensemble created from scratch made entirely out of bags provided. The queens fight over their raw materials and get to designing their original looks. There are a couple queens that are have a lot of experience around a sewing machine, and there are others busting out their hot glue guns (not shocking). LaLa Ri decides now is the best time to learn how to use a sewing machine, and with Utica’s help, threads her first bobbin. After jamming the machine, LaLa Ri decides hot gluing paper gift bags to a bodysuit is somehow the better option. I wonder how this will end…

As the queens are busy designing their looks, it’s revealed that Tamisha is technically LaLa Ri’s first drag mom. They haven’t talked in a few years, but Tamisha says LaLa will always be an Iman at heart. Ru enters the werk room to check on the queens. All of the queens have a conversation with Ru about their fashion inspiration, outfit progress, and biggest concerns when it comes to the competition. Before leaving the werk room Ru tell the queens that they must incorporate a customizable Coach clutch bag into their money bags look. And with this totally organic Coach ad in the middle of the episode, the bag has been secured (literally), and it’s time for the ball to begin.

After the break it’s elimination day! The queens are putting final touches on their ball looks and painting for the runway. They have a discussion about Black Lives Matter, and the importance of using their platform to encourage change once the show is over. Out on the main stage Ru introduces the judges, including returning guest judge comedian Nicole Byer. Tonight, we’ll be seeing an incredible 36 looks on the runway, so start your engines, and let the ball begin! The first category is Mixed Bag, and all of the queens are serving in punny bag looks. There is truly so much diversity in this category, but the standout has to be Utica in her doggy bag poodle realness. It’s fashion, it’s camp, and it’s giving us everything. The next category is Money Bags, and the queens are looking expensive honey. The standout from this category was hands down Gottmik serving nothing but opulence. She owns everything, and I’m going to need to own that pantsuit. The final category is the handmade looks, and there were a lot of creative looks on the runway, a lot of interesting materials used. Gottmik’s asymmetric fashion-punk look is everything, but Utica’s sleeping bag gown is the clear showstopper from this category.

Following the runway Ru announces Denali, Elliott, Symone, Olivia, Tina, and Kandy are all safe. While they untuck backstage the rest of the queens are critiqued. Michelle tells Joey that she appreciates mixing up the looks with different wigs, but she could tell her handmade look was well, glued. Carson didn’t love LaLa Ri’s bag of bones look. The judges told her that her money bags look was rich, but they (and we) all agreed her final look was one of the worst on the runway (and possibly ever). After weeks of telling Tamisha showing off her impeccable tailoring on the runway, her looks fell short with this maxi challenge. The judges love her though, so she’ll probably be safe. Michelle drooled all over Gottmik’s money bags look (I still am) and commended her for bringing something so different to the runway with each category. The judges loved Rosé’s Scottish pun, and her ingenuity for her final look. Finally, Michelle told Utica she was originally wrong about her at the beginning of the competition and was so impressed with every single look she brought to the runway tonight. 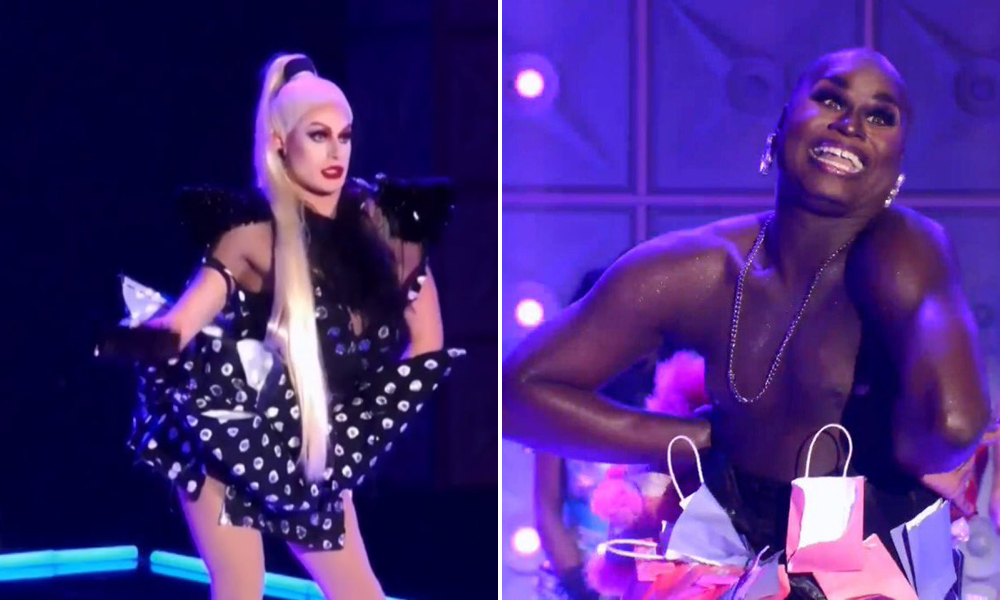 Following the judge’s deliberations, Ru announces Utica and Gottmik are the top queens of the week, but it’s Gottmik who takes home the biggest trophy at the ball. Rosé, and Tamisha are both safe, leaving LaLa Ri, and Joey Jay to lip sync for their lives. This also leaves Kandy Muse shocked as she revealed her crush on Joey earlier in the episode. The bottom queens lip sync to “Fancy” by Iggy Azalea (featuring Charli XCX, obviously). This performance is filled with passion as both queens desperately want a spot secured. Following the lip sync Ru decides that it’s LaLa Ri who will continue on in the competition, which means Joey Jay becomes second queen to be sent home this season. Rest in peace to the showmance that never was. #Jody.

Stand out queen of the week: We have to give it to the one and only Gottmik for slaying every single category on the runway. Much like Michelle, we can’t wait to see what else they bring to the main stage.

Best use of an unconventional materials in a high fashion look: Mark my words. Utica’s sleeping bag dress should not be slept on.

What we’ll see next week: The queens get down with disco dance routine, and the drama between Kandy and Tamisha fires up.