An All Star is born…

We’ve made it to the end of another season of All Stars. This season we saw a fantastic cast of diverse fan favourites return to redeem their original runs on the show, and hopefully make it to the end where their face will be in the Drag Hall of Fame. It wasn’t without strategy, and a little bit of drama though. While this was a relatively tame season, we still went on a bit of a rollercoaster, and tonight we’re going to find out who our next all-star is. Will it be Jujubee, Shea, or Miz Cracker? More importantly, what was that phone call about at the end of last week’s episode?

Our finale starts in the werk room following Blair’s elimination. The top three reminisce about their journeys. Shea says this is the top three she envisioned, and I have to agree. This top three is stellar, and I’m sure I’ll bring it up several times before the end of this recap. All of these queens want it bad, and they’re going to have to (pillow) fight for that top spot. The next day in the werk room, all of the eliminated queens make a secret entrance and hide before the top three get there. The top three enter, read Blair’s message on the mirror, and talk about their past competitors. Little do they know; they’re all standing behind a hot pink glory-hole listening to every word they’re saying. The eliminated queens reveal themselves, and everybody is back. After a brief reunion, Ru enters the werk room, and now that the whole family is back together, she explains that she thinks it’s best if things aren’t left unsaid. Ru also announces the final challenge, which is of course the song challenge. The top three queens will all have to write their own verse to Ru’s song, and perform it with choregraphed dance routines, and everything. The eliminated queens are here to help with that, and just like that, we’re on our last challenge of AS5.

All of the queens gather on the couch to release the drama fuelled tension. First, India apologizes to Derrick, and it seems like that beef is squashed. Next, Ongina nominating herself to leave is brought up, and while Ongina tries to justify her actions, Mariah tells Mayhem she’s annoyed that she also voted for herself to be eliminated. Next Alexis brings up THE drama of the season (the plan Alexis, and Mayhem allegedly had to vote Shea out). Mayhem, who is a little surprised she was brought into this, denies there was a campaign to send Shea home, and explains that she was simply telling Alexis how she voted following her casting her vote, proving once and for all this was not a campaign. Without being too explosive, we can conclude that India was blowing it way out of proportion. Does everybody feel better now? I know I’ll finally be able to get some sleep. Mayhem tells the rest of the queens about the deal she made with India in week one. There are apologies all around, and Derrick is just pleased to not be involved for once.

Out on the runway, the top three queens followed by the eliminated queens meet Todrick Hall to learn the choreography for the song. This top three aren’t having the easiest time picking up the steps, but to be fair, Todrick’s choreography is notoriously hard. Rehearsals as always, look a little rusty, but I’m sure the queens will pull it all out for their final performance. Next, each of the top three take turns as guests on Ru and Michelle’s podcast. Juju discusses her sobriety, the future of drag. Miz Cracker talks about what her drag means to her, and how she’s changed since her season. Finally, Shea talks about her drag evolution, her inner saboteur, and why her head wasn’t in it to win it the first time around. 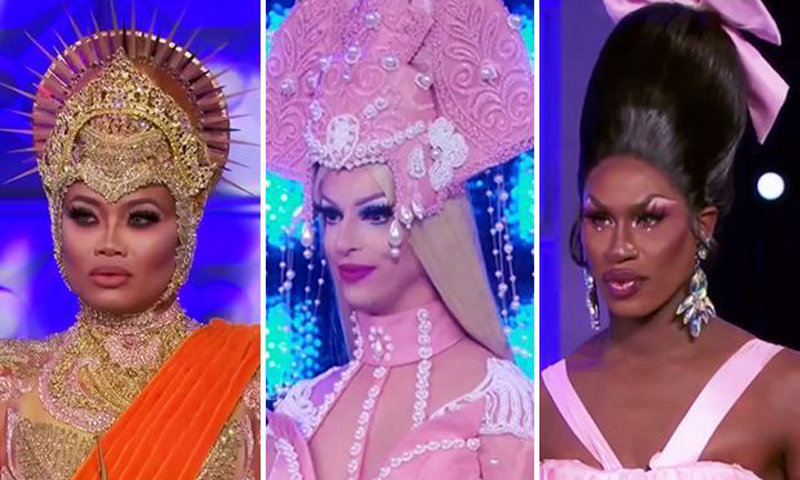 Back in the werk room it’s the last elimination day! Not only is this top three incredible, but each one of them could win the crown, and I think we would all be ok with it. All of the AS5 queens are back, and all getting ready together. The top three are all nervous about getting the choreography perfect. Alexis serves us one more Walter Mercado prediction, and it’s time for the grand finale. Out on the runway, it’s just family on the judging panel. Clap Back is a fun performance, not the best we’ve seen from an All Stars group (Read U Wrote U remains superior) but the production was fun, and the top three all did a great job. Out on the runway the category is All Star Eleganza, and all of our AS5 queens are walking the runway again. We love to see it! All of the eliminated queens look stunning, and our top three did not come to play. It’s time for the final critiques, and the judges are loving Jujubee’s final look, and her star quality in the song challenge. The judges loved Cracker’s performance in the song and tell her how proud they are of her for pushing past her perfectionism to grow and become a legendary queen. Shea also receives the highest accolades, and for good reason, she killed it in the challenge, and she looks absolutely sickening in her bubble gum pink vintage inspired gown. This top three is legendary, and this won’t be an easy decision. After a short walk down this season’s memory lane while the judges deliberated the winner, it’s finally time to see the top three lip sync and meet our newest all-star.

All three top queens lip sync for the crown to Janelle Monáe’s Make Me Feel. After a legendary lip sync Ru announces that the winner of RuPaul’s Drag Race All Stars 5, and the next queen to be inducted into the Drag Race Hall of fame is the gorgeous, and talented Shea Couleé. She played a stunning game, and we are so happy to see her face in the hall of fame. Condragulations Shea!