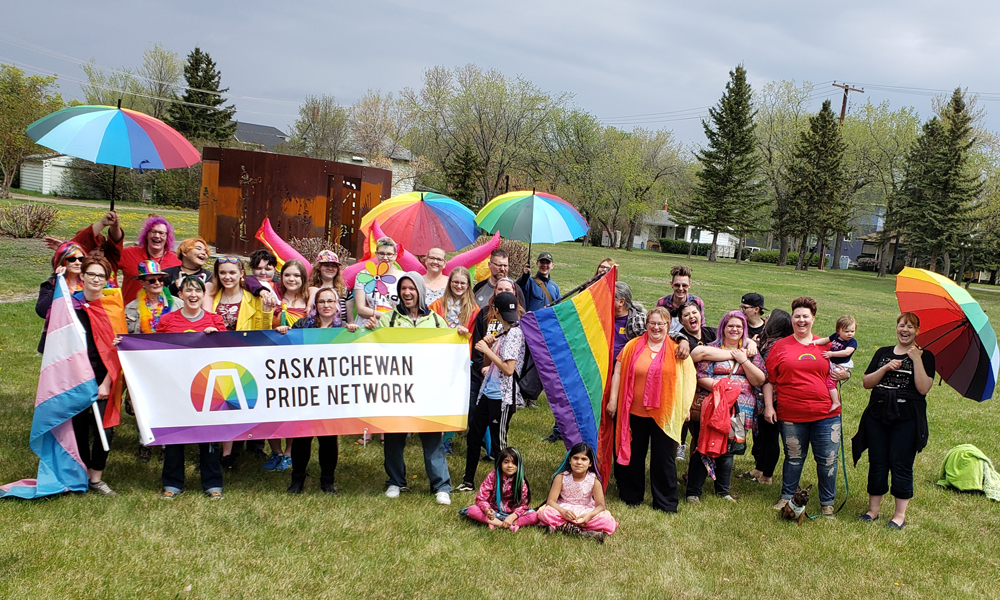 Reflections on what impact Pride movements in small communities like Yorkton, Sask., have for folks who have never been able to be out in their communities…

Imagine being a young queer kid walking down a street in your hometown, kicking a pebble with your shoe. Then you look up, and what do you see? A rainbow flag rising up a flagpole, a magnificent reminder that you do indeed exist.

That’s not my story. I grew up in a much less accepting time, when rainbow flags were things you saw on TV and your parents told you to quit asking questions if you asked them about it.

Yorkton had its first Pride flag raising in 2016. I remember it well, although I wasn’t there. I was still hiding in a closet somewhere, trying to be an ally where I could, because being out in my community was too frightening a thought. The following year, Yorkton had a Pride march. I remember that too, even though I wasn’t there. There were several advertised events that I didn’t go to. I vividly remember driving by them, each time willing myself to go inside, just to see. I wondered, was that the reality for anyone else? Was anybody else even in there?

Marching in my first Pride parade in 2017, in my hometown, was the most amazing thing I have ever experienced. After that, I never looked back. I hadto do this, I had to get involved. At that time, we were supported by Moose Jaw Pride and the Saskatchewan Pride network and by the almost single-handed efforts of Laura Budd, our liaison in the area. Calling her a liaison feels unfair. She is an advocate, a champion, and an all-around amazing woman without whom Yorkton might never have had a Pride movement at all.

We began as a fledgling movement, fumbling around and trying to get a toehold in the community. Well, we must have done something right because we went from having just a handful of folks at those first Pride events to having a couple of hundred show up over a week’s worth of events at our most recent Pride week.

Of course, we had backlash. On social media, people complained about the rainbow crosswalk that our LGBTQ+ youth had painted. But when the bullies come out, so do the allies. We found out that we had more allies than we realized – we had people in our corner.

By 2019, we had grown so much that we decided it was time for us to strike out on our own. With the support of Moose Jaw Pride and the Saskatchewan Pride Network, we were able to incorporate and create a Pride board. I now proudly sit on that board as its secretary, and I think back to that few short years ago, sitting in my car and deciding whether to stay or to go. That all seems so long ago.

I’m glad I was able to be a part of this movement alongside two amazing women: Margo Allaire, our board chair, and Laura Budd, our treasurer. We now have regular board meetings and social media pages, events throughout the year such as game nights and movie nights, and events like bubble ball soccer. We have the privilege of being able to serve our LGBTQ+ community in ways that foster connection and help people feel less alone.

In March 2020, we made the difficult decision to postpone our Pride events indefinitely. It was a blow, considering the momentum we had gained. But what is it they say about the best-laid plans? So now we face a new reality: finding ways to support our queer community amid social distancing and fears of COVID-19. But, as queer folks, we all know what it’s like to have to wait until it’s safe to come out. We know we can handle this, and we aren’t going anywhere.

JENN TATTON is a queer activist, writer, advocate, cosplayer and all-around geek who loves to be involved in their queer community. They work in mental health and help support LGBTQ+ mental health in their community.