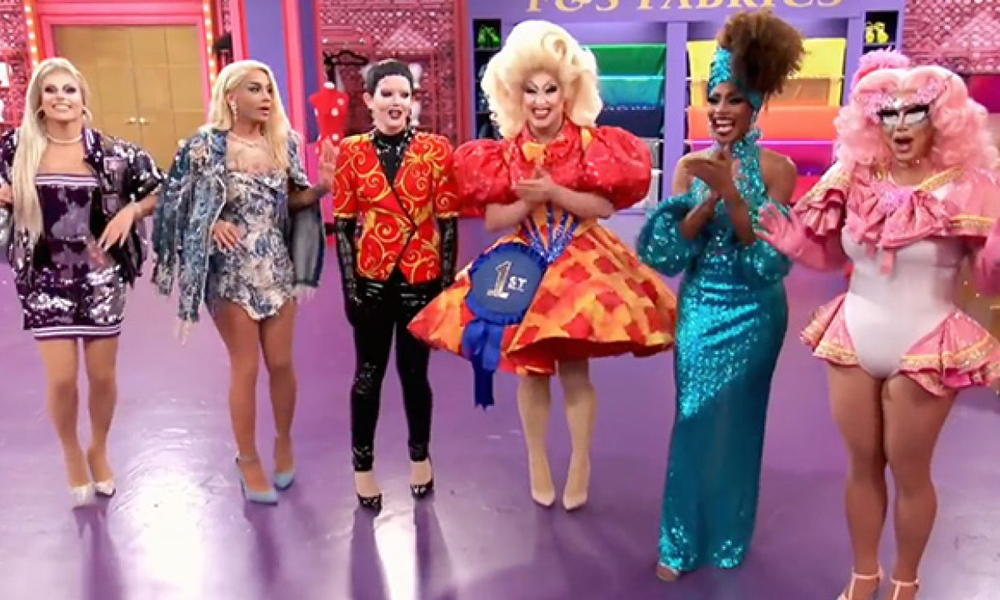 And all that jazz…

Alright, after last week’s promising premiere, it’s been a bit of a bumpy ride for our season 12 queens, which suggests that this season might be a bit of a bumpy ride to watch. Are you strapped in and ready to go? Because we’ve still got half a cast of queens to meet, and another half a premiere to watch! The episode begins where we left off last week. The first seven queens we met enter the werk room, gagged at the events of the week. And while an intimate group of seven feels right, some of the queens are already on to Ru’s plan, because they know exactly what’s going to happen this week, and none of them are invited.

The post main stage kiki is interrupted by a video message from Ru herself, who instructs the first set of queens to leave a message on the mirror for the second half of the group, which some of them have a little too much fun with. Relax girls, none of you are safe yet. It’s a new day, and it’s time to meet some new queens. First in the werk room is Rock M. Sakura, who is serving Sailor Moon/Trixie realness. Ok, werk. Next in is Dahlia Sin, who hails from the house of Aja, and if she’s anything like her house’s namesake, we’re in for some edgy looks, and an attitude to match. Next in the werk room is disgraced disqualified queen Sherry Pie (read more on that here), who has been in hot water ever since it was announced she would be competing this season. Jan is next through the doors. She’s serving face, but the look is a little pedestrian, you were all thinking it. Jaida Essence Hall is next into the werk room and she is serving old school drag. Mama looks like she just walked out of a Pose ballroom scene, and we are LIVING. Next we have a spooky queen. Hot off the tails of Yvie Oddly’s win, Aiden Zhane takes the place of the “weird arty” queen of the season, and we’re always up for something different. Aiden finishes the second half of the introductions, and once again the group is confused as to why there are only six of them there. To kick things off, Ru introduces the same mini challenge that we watched last week. This week we didn’t get as many florals for spring, and some different silhouettes, and for that we are grateful. The fall looks were also very different from what we saw from the first group, further proving that we are in for quite the ride this season.

Back in the werk room following the challenge, the queens are de-dragging and just about everybody has a crush on Dahlia, and she knows it too. Ru re-enters the room and introduces the maxi challenge of the week. A jazzy musical number called You Don’t Know Me. The writing of the lyrics doesn’t seem to be a problem, but the choreography looks like it’s going to be just as messy as it was last week. Rock takes the lead with the choreography, and she’s actually doing a pretty good job of it, but some of the queens are feeling like the dance should be kept simple. Jaida speaks up to say she can’t keep up, and Rock is feeling responsible for her leadership. I’m sure whatever happens, they’ll turn it out on stage, so I wouldn’t worry too much.

It’s main stage day, and while the queens are painting, Rock reveals a piece of her past in the makeup chair. While bonds are beginning to form, Sherry reveals she’s a bit worried for Aiden’s performance after yesterday’s rehearsal, and as much as I don’t want to be the one to say it, worry about yourself girl! Out on the runway Ru introduces this week’s guest judges Thandie Newton, and pop icon Robyn. The musical number is up first, and I’ll be honest, it’s not as strong as the rap challenge last week. It lacks substance and personality. Lyrically, Jan performed the most memorable segment. Out on the runway the category is tulle, and the queens are serving us Ariana at the Grammys realness.

The critiques of this group are a little harsher than last week’s but still gave us a lot of information on what queens will excel in this competition based off of their reactions to critique. After the judge’s deliberations Ru tells Jan, Aiden, Rock, and Dahlia that they are all safe. Leaving Sherry and Jaida to battle for the top spot of the week. The top two lip sync to Robyn’s Call Your Girlfriend. After her twists, turns, outfit reveal, and splits, it’s no surprise that Jaida was crowned the winner of the week. Condragulations girl!! We can’t wait to see where this season takes you. The episode ends with this week’s queens meeting the first group from last week, and it all feels a little red rover at recess, if you get what I’m saying. “Meh.”

Front runner of the week: Jan was strong in every challenge this week, and really stoof out on the main stage. She takes criticism well, and she’s here to grow. I hope she sticks around for a while.

Worst edit of the week: Miss Jaida had us worried she wouldn’t be able to keep up with the choreography in rehearsal, but gave the most natural performance out on the main stage… What was that all about?

What we’ll see next week: Ru shakes things up with an improv challenge (not shocking), and tensions rise with all of the girls in the werk room at once.

And, of course… Here’s the lowdown on Sherry Pie being disqualified from the season.