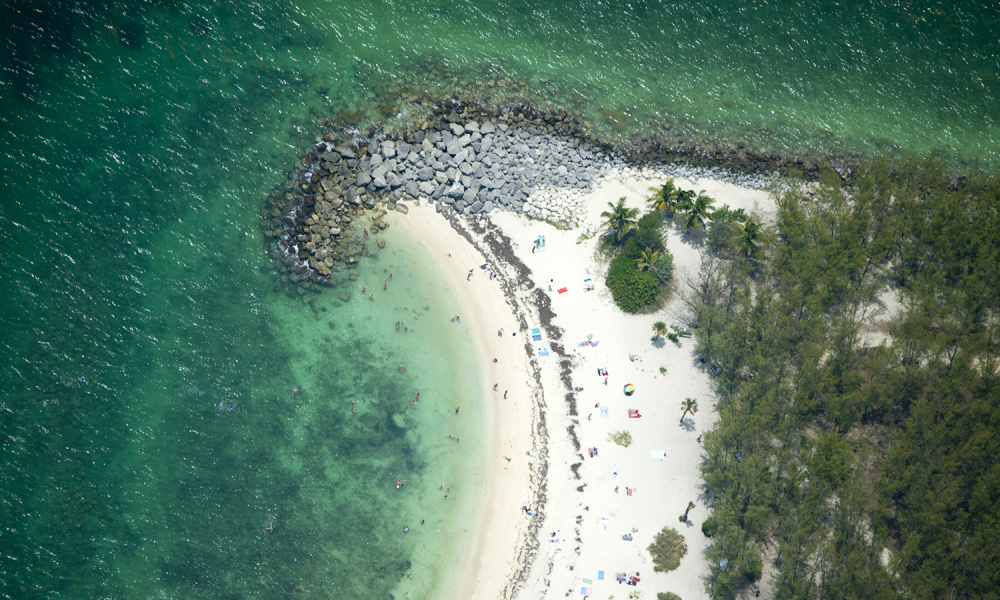 A road trip down Overseas Highway to Key West nets the freshest fish, naked pool boys, pesky pelicans and sublime sunsets. The pie’s not bad either…

This is the straightest road I’ve been on for a while, and I’m from the Prairies. We’re bombing down Florida Highway #1 heading south. In a few minutes, we’ll be on the famous Overseas Highway of the Florida Keys, the longest overwater road in the world, with 42 bridges, including one that is 11 kilometres long. This road trip is an adventure I’ve been looking forward to ever since watching the chase scene in True Lies, where Jamie Lee Curtis holds on to the helicopter skid for dear life. Handily, little police radar icons start popping up on the map on my phone, keeping us in check. We silently hope the black Mustang convertible doesn’t make us look like shooting ducks to the radar guns.

Ta-da! Swiftly, the road opens up to nothing but water, and we are in Key Largo, talking out of the sides of our mouths like Humphrey Bogart. We screech off the road, last-minute-like, pulling into a giant liquor store the size of a supermarket. We really are in film noir drama, I think. It’s hard not to go to the United States these days and not feel you’ve landed inside a TV show.

While Hurricane Irma flatted huge swaths of the Keys in 2017, things are mostly back to normal, with just a few properties still pondering their fate. We’re visiting right before peak season, so everything is looking ship-shape, the calm before the tourist storm – more than two million people visit the Keys each year. That’s a lot of Mustangs.

With driving comes lunch; there are only so many car Doritos I can eat in a day. Our first taste of Keys comfort food sets the tone for the week, as we eat like the locals do, at the iconic roadhouse-style eateries that line the highway, some quirky, some plain – all delicious.

At The Fish House, we slide into the start of what becomes a week-long routine, selecting a fish (grouper, yellowtail snapper, mahi mahi, and more), then choosing how we’d like it prepared (grilled, blackened, breaded, pan sautéed, jerk…the list goes on). My partner in crime orders his done Matecumbe-style – topped with tomatoes, shallots, basil, capers and lemon – then relives a Walt Disney movie moment, outlining the plot of Treasure of Matecumbe, oblivious to my eye rolls. The Keys restaurants have menu staples that quickly become a good habit: conch chowder, spicy tuna nachos, lobster done every which way, stone crab claws, crab cakes, fried oysters and, of course, variations on the celebrated Key Lime Pie. Open-air places like Sundowners and Keys Fisheries, the front house for one of the region’s biggest fish exporters, sport large wooden terraces filled with locals and tourists alike, inhaling right-off-the-boat fish along with decent local craft beer. 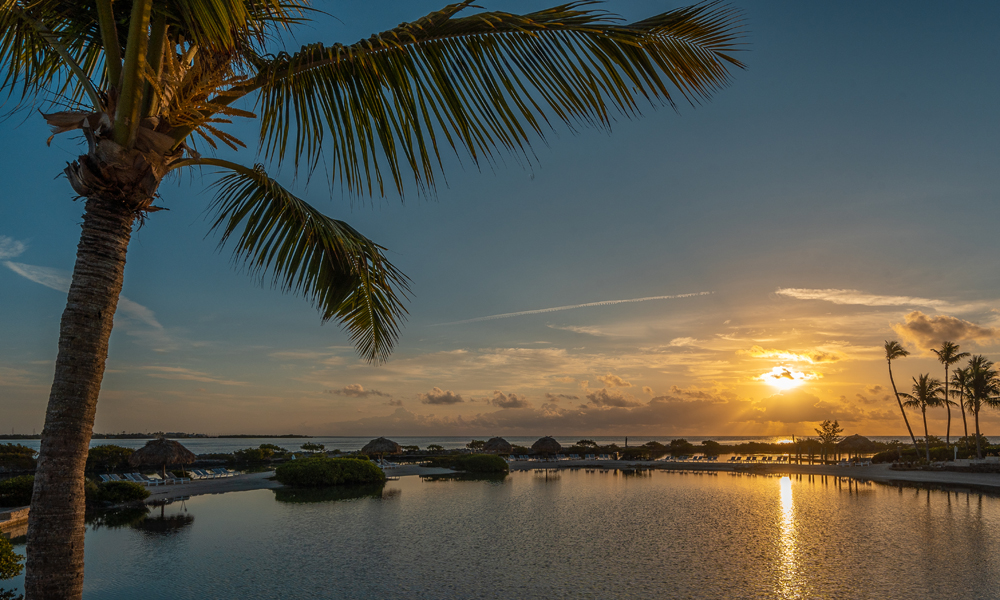 We wander into the outdoor market mix that is Robbie’s Marina in Islamorada to find it filled with visitors who have stopped specifically to hand-feed the giant tarpon that favour the pier here. We sink into stools on the deck of the adjacent, aptly named Hungry Tarpon restaurant, order Trailer Trash Bloody Marys and fish burgers, then watch as crazy-big pelicans go greedy-gus all over the tourists’ fish buckets. Despite a sign that says The Pelicans Bite, parents let their kids run free. In between mouthfuls of lunch, we laugh as at least two children are bitten and start crying. One pelican even draws blood. The waitress quietly admits to a daily scene of screams during the busy season, people falling in the bay, a fish-feeding frenzy, absolute mayhem.

The culinary delights continue at Playa Largo Resort & Spa, the first new-build resort in the Upper Keys in more than 20 years. At the whitewashed Sol by the Sea, a beach-house vibe sets us up for crab fries, curried black grouper, jerk chicken, and warm pineapple bread with molasses butter. It’s at Playa Largo that we experience for the first time a nightly ritual celebrated throughout the Keys: sunset. At what the resort pegs as its daily Eventide, guests gather for shoreline cocktails and music by the fire pits – some right from the pool, some already dressed for dinner, others taking in the scene from kayaks out on the water.

The sea really is the draw of the Keys, as there is no escaping it truly – water sports of every nature, snorkelling on the reefs, fishing, tons of paddling, parasailing, sunset cruises and, of course, scuba diving. When we swing into Hawks Cay on Duck Key the next day, the first question is: What’s the difference between a cay and a key? Nothing, as it turns out. You’re even supposed to pronounce them both “key” but a few don’t, I notice.

Fresh from a $65 million renovation, Hawks Cay Resort has incredible oceanfront suites, plus several “streets” of villas, some with four bedrooms. The complex is really self-contained, with its own marina and boat excursions, a store, kid’s club, spa, tennis courts and six restaurants. One of those is the stellar Angler and Ale, where I break with the fish tradition and devour a plate of sweet and sticky ribs. I work these off the next morning swimming lengths in the saltwater lagoon, which I have all to myself. Not having to worry about hitting my head at the end like I do at the pool? Priceless. 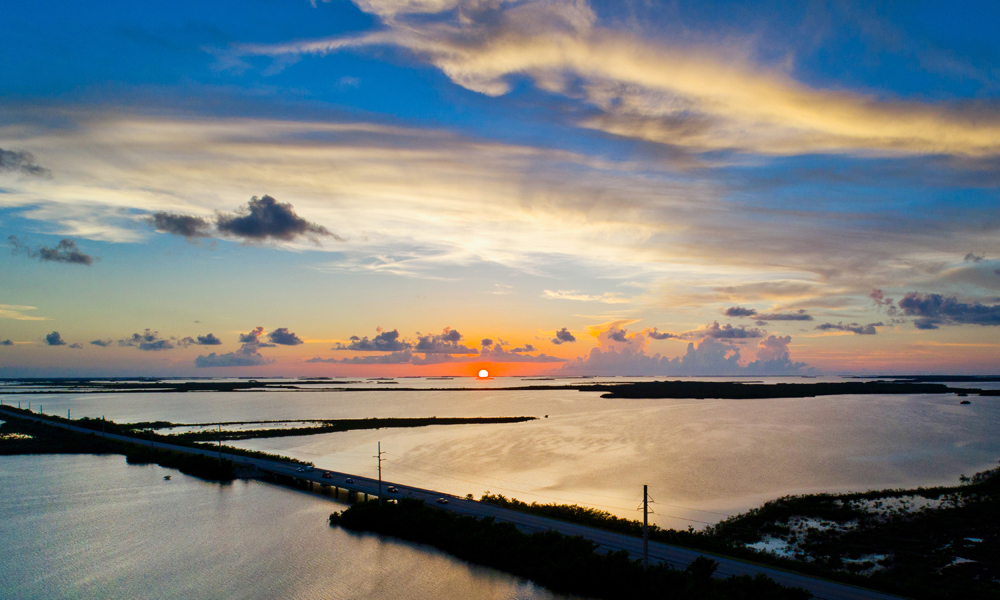 The gay paradise at the end of the road
It starts to rain on our approach to the southernmost point in the continental US, the gay mecca that is Key West. But there’s no way we’re putting the top up; we just drive faster. It works! Sort of.

This two-by-four-mile island was originally an eclectic haven for Indigenous Americans, Spaniards, freed slaves, sailors and pirates, and eventually welcoming the creatives, the queers and the misfits, including Tennessee Williams and Ernest Hemingway. It’s more like the Caribbean than the US – the locals sometimes refer to it as Unflorida. Key West was rather dangerous after dark a hundred years ago, and they’re proud of their somewhat bawdy history, playing it up in places like Sloppy Joe’s, Captain Tony’s and the Green Parrot. We find a comfortable, devil-may-care attitude spilling into different parts of the culture.

Home base here is Ocean Key Resort, awash in classic Key West style, all turquoise, yellow and lime green, folk art and florals, with rustic-chic trimming. The resort is best known for its sublime, Latin tapas-inspired Hot Tin Roof restaurant and for its extremely long Sunset Pier, now made of concrete after Irma blew away the wooden version. It’s packed at sundown, a parade of colour and cocktails, live band chugging away, people waving to the boats and vice versa.

I take in the scene from my balcony: two docked cruise ships, sunset-cruising catamarans, a tall ship, several small boats that look like floating tiki bars. Spectators are settling in for the sunset, relaxing in the pool below, on the pier and in adjacent Mallory Square. Buskers, bands, boat stereos and drunk pool buddies drown each other out. A military helicopter flies by.

The same type of surreality continues later on at Island House, a notable LGBTQ hotel-slash-haunt. We luck into the fact that they’re having a Wednesday night pool party and that clothing is optional. We maintain an absurd degree of eye contact with the rather international crowd in order to keep from glancing down, while throwing down half-price drinks for a few hours. We’re not sure what parts we’re playing in Blood Lines, but the drama is real.

When you go
The best time to visit The Florida Keys is between March and May, when the volume of tourists and nightly rates are down. Check out fla-keys.com and visitflorida.com to plan your trip.