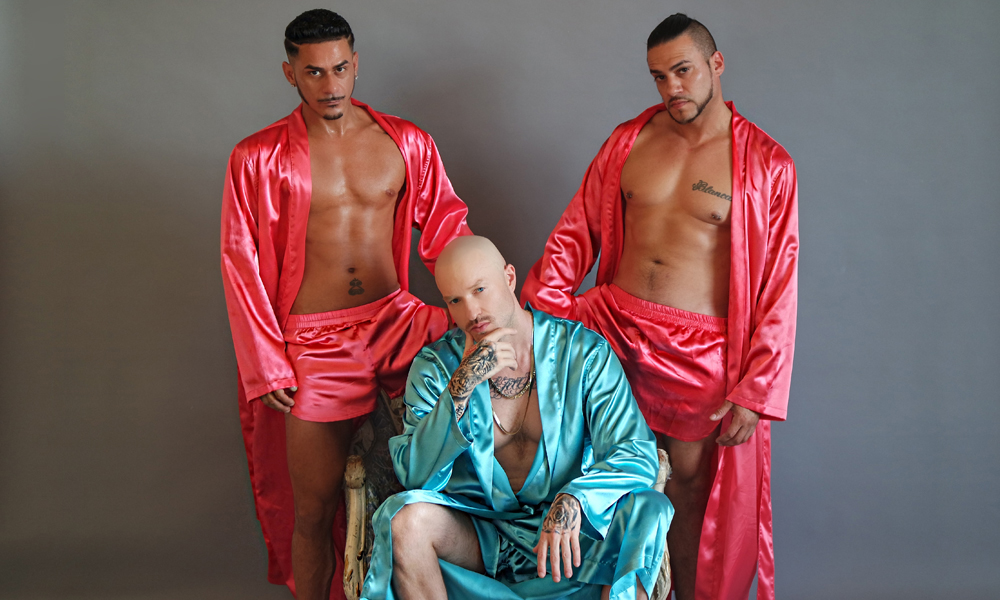 The gay hip-hopper releases his ode to Papi Chulos…

Cazwell got his start in hip hop as part of the Boston-based duo Morplay, which included female MC Crasta Yo. But it wasn’t until the early 2000s, after he moved to NYC and launched his solo career with a steady flow of danceable hip hop club jams that Cazwell became a bona fide gay-lebrity. Songs like “Ice Cream Truck” and “I Seen Beyoncé At Burger King” showcased his hypomanic take on pop culture and made him a dancefloor favourite.

The tour included a slew of LGBTQ icons including Rufus Wainwright, Rosie O’Donnell and the Indigo Girls, but Cazwell was able to hold his own by speaking to a younger gay generation that preferred hard rhymes matched with sick beats.

A decade later, Cazwell continues to do things his way. This month he is out with his latest track, a Latin-infused jam titled “Duo Lingo.” We spoke with him from his home in Los Angeles.


What inspired you to create “Duo Lingo”?
The idea for the song came when I was using the Duo Lingo app on my iPhone last year, trying to learn Spanish — failing miserably, I might add.  At the same time, me and my friend Tom Bike were talking about doing a song together. I told him it would be cool if I did my part in English and he did his part in Spanish. “Duo Lingo” sounded like a good working title to start with.

How would you describe the sound of the song?
It is definitely Latin inspired, combined with electronic drops. DJ Mad Science produced it with me.

And its message?
Just to go out have a good time, party with your friends and get laid. It’s nothing too deep, really, but I will say the opening line (“Hello, it’s me, I was wondering if after all these years, you want to get the D”) was inspired by Adele’s “Hello.”

This isn’t your first Latino-inspired single. You’ve had “Rice and Beans,” “Spicy,” and now “Duo Lingo.” Where does this affinity for Latin culture come from?
Latin influences in pop music is extremely common. I love it because it is sexy and always gets people on the dance floor.

Do you date Spanish men?
I date Latin men but not exclusively. “Rice and Beans” and “Spicy” were both inspired by boyfriends I had at the time.

Your videos often feature Latino men as strippers in skimpy outfits. How do you feel about those who argue you are fetishizing Latino culture and unfairly sexualizing POC stereo types?
I understand my music videos that tend to stand out the most are the ones where the guys are wearing thongs, shaking their asses. I only do it when the video calls for that kind of look, based on the theme of the song. When I do a video like, let’s say, “I Love You,” “Hella Horny” or “Loose Wrists,” it’s not necessary to have as much of a super sexual visual. But, for “Duo Lingo,” it definitely was.

Where was video filmed?
Myself and Brad Hammer filmed the video in the middle of August at the legendary FuBar in West Hollywood. I wanted to make sure the bar looked like a hole in the wall dive bar. I wanted the environment to be as grimy and as ratchet as possible. I used to throw a Friday night party at Fubar and the owner has always treated me like family. I’m so grateful he let me borrow the space.

Adult film stars Cesar Xes, Beaux Banks, Fernando Figuero and Rudy Yos appear in the music video.
Most of the boys in the video are dancers in West Hollywood. Cesar and Fernando are very good friends of mine. KiKi Xtravaganza helped me get the others. She was a big help with the casting.

Do you frequent male strip clubs in Hollywood?
Yes, I like to go where the boys are and have a good time. I also DJ in West Hollywood at least twice a week and have worked in clubs for over 15 years so I’m in the environment all the time. Trust me, in a strip club, the stripper has all the control. Everyone in the strip club is there for the strippers and they know it.

Whose idea was the cute little salsa dance at the end of the video?
I can take credit for that idea. I knew finishing the video with a cute dance that got everyone involved would wrap the video up in a nice little bow. My lead dancer Jon Silva helped me execute it. I love videos where all the cast come together at the end.