Tinder Will Now Hide Your Sexual Orientation In Anti-LGBTQ Countries 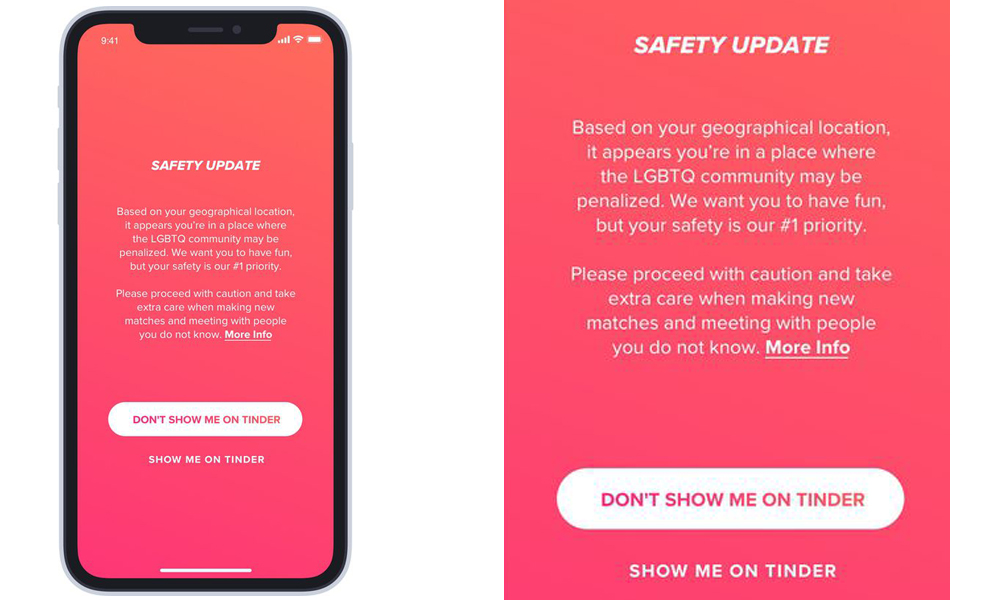 Tinder has added a new safety feature that will hide your sexual orientation when you are visiting a potentially unsafe country if it is indicated on your profile. Travellers will also receive alerts when they open the app.

Tinder writers: “We recognize and believe in the importance of being inclusive of all gender identities and sexual orientations, but the reality is this: nowhere in the world is without potential risk, and some countries have specific laws that target LGBTQ+ people. Check out the laws around you when you travel to a new place and research what types of legal protection, if any, are available to you based on sexual orientation. In the event that you’re in unsafe territory, we suggest toggling off “Show me on Tinder” which you can find under the settings page.”

“If you have added a sexual orientation to your profile and choose to be shown on Tinder, we will hide your sexual orientation from your profile until you leave that area,” the app added. “It’s important to exercise extra caution if you choose to connect with new people in these countries – as some law enforcement have been known to use dating apps as tools for potential entrapment. Some countries have also recently introduced laws that criminalize communications between individuals on same-sex dating applications or websites and even aggravate penalties if that communication leads to sexual encounters.”

Tinder is available in 190 countries and in more than 40 languages.

According to Tinder CEO Elie Seidman, the update is in direct response to the company’s decision in June to add new sexual orientation options. People can now select up to three out of nine terms that best describe their sexual orientation, which can then be displayed on profiles. Those terms include: straight, gay, lesbian, bisexual, asexual, demisexual, pansexual, queer and questioning. Previously, people were limited to selecting a preference of men, women or both.

“As our team discussed the ability to add your orientation to your profile and display it, the conversation quickly shifted to focus on how this could put users in some areas at risk. Before rolling out Orientations more widely, we wanted to build an update to address this and work with the experts to do so,” Seidman said.