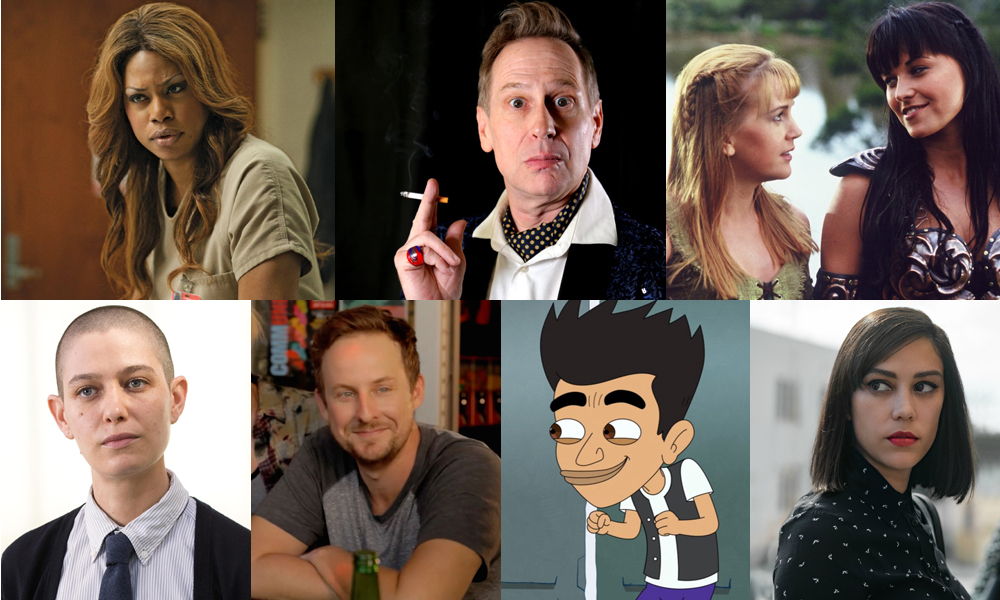 Homer Simpson once quipped: “I like my beer cold and my homosexuals fa-laaaaaming!” It’s a sentiment media portrayals seem to agree with. Though the last few years have seen more diverse, nuanced depictions of folks in the LGBT rainbow, media hasn’t always been kind to its LGBT characters (see: Jenny from the L Word, every maudlin HIV story from the early 90s, Family Guy’s near hate crime portrayal of Quagmire’s trans parent). Amongst the lisping, limp-wristed, louche LGBTQs, here are a few of our favourite representations of queers in television.

Sophia Burset, Orange is the New Black
Laverne Cox
Sent to prison for credit card fraud, Burset makes the most of her time in jail by operating a salon for the women of Litchfield. The character is not perfect (who is?), but Cox’s portrayal of Burset – a perennially positive voice of reason, until people push her too hard – is proof positive that it’s just better to hire trans actors to play trans roles. Hear that, almost every other movie and show, ever?

Buddy Cole, Kids in the Hall
Scott Thompson
All that stuff we said about lisping, limp-wristed nellies? They’re only bad when it’s not hilarious. Thompson played up the stereotypes to perfect comedic effect. He even toured, in 2018, again as Cole. When asked if he thought Cole was a negative stereotype, he told Orlando Weekly, “I think most gay men are more Buddy than Sly. I mean, I’m sorry.” How Canadian.

Xena and Gabrielle, Xena: Warrior Princess
Lucy Lawless and Renee O’Connor
This high camp mid-90s spin-off from Hercules: The Legendary Journeys (near naked Kevin Sorbo also had all sorts of mid-90s boys feeling some sort of way!) was about a great friendship between two powerful women. No, it’s never outright stated that Xena and Gabi were lovers, but Lawless herself told Lesbian News that Xena was “Gay. Gay, definitely.” She goes on to say, “They’re married, man.” Case closed.

Taylor Mason, Billions
Asia Kate Dillon
Asia Kate Dillon plays Taylor, a non-binary intern at the cutthroat Axe Capital. Their out of the box thinking is what draws the main character, Bobby Axelrod, to hire them. One of the first depictions of non-binary characters, so Mason won’t be everything to everyone, but this kind of representation is important. Dillon is also non-binary in real life.

Derrick, Happy Endings
Stephen Guarino
No last name, like Cher. This character brought “d-r-a-m-a, drama!” to the Chicago group of friends that was shockingly similar to… Friends. When Penny seeks out a more stereotypical gay best friend, she finds Derrick who later tells her “say it don’t spray it, you stupid clumsy bitch!” (a series of words funnier on screen than in print). Yes, Max was the main character, but his gay slob persona was nothing compared to Guarino’s portrayal of Derrick.

Jay Bilzerian, Big Mouth
Jason Mantzoukas
It’s a crass, foul-mouthed coming of age story, and Jay’s character is the crassest, most foul-mouthed of them all. It’s animated, and there are many surreal parts to the show (another favourite scene is when gay teen Matthew learns, from Harvey Fierstein, that being bitchy is not a replacement for a personality.) We’ll leave it to you to watch, but Jay eventually discovers he’s bisexual through couch cushions and a pillow. It takes a kooky route to get there, but his bisexuality is never played for gross-out laughs, and Jay learns to be proud of his identity.

Emma Hernandez, Vida
Mishel Prada
Emma has a complicated relationship with Los Angeles and the mother who sent her away when she saw her kissing another girl. When mom Vida dies, Emma must return to sort of the pieces of the bar her mother left. She herself is presumably lesbian, although she is seen having sex with a man, disinterestedly, but she doesn’t come out and say it, despite having a lot of girl-on-girl sex. Her motivations become even more confusing when she discovers her own mother was gay as well. Prada plays Emma as a strong, but deeply vulnerable person, and we look forward to seeing how the character grows.