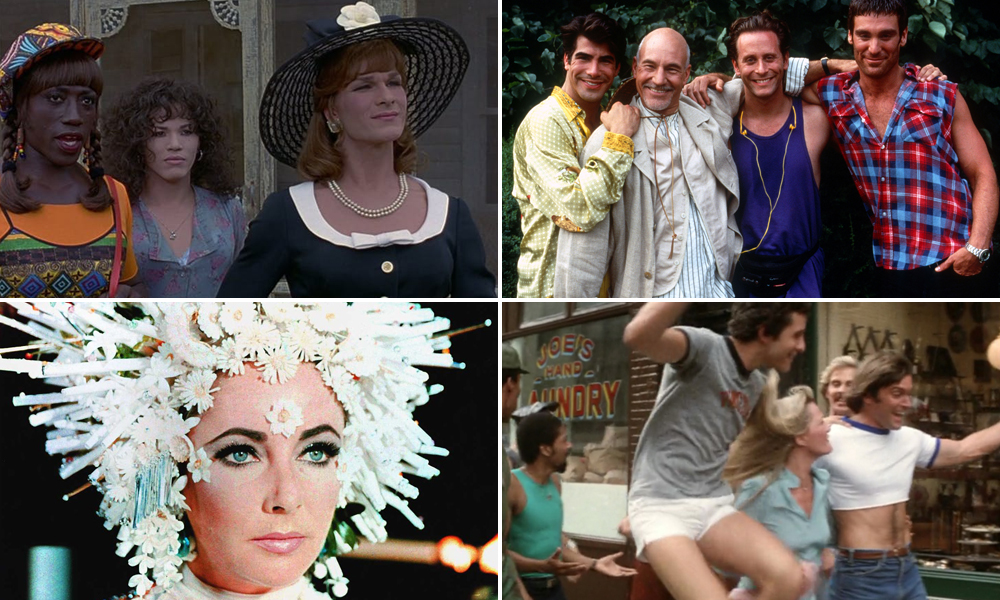 Just in time for Pride, Shout! Factory is releasing four classic Queer titles on Blu-ray. The films represent a wide variety of genres, from a romantic comedy to a Tennessee Williams drama, to a splashy musical and a drag extravaganza.

First up: Produced in 1995, Beeban Kidron’s To Wong Foo, Thanks For Everything, Julie Newmar attracted a good deal of attention upon its initial release due to the casting of straight macho men Patrick Swayze and Wesley Snipes as gay men in drag. Though the film received mixed reviews at the time, it was a moderate success at the box office, pleasing the crowds who came out to see it.

To Wong Foo is the story of Vida (Swayze), Noxeema (Snipes) and Chi Chi (John Leguizamo), three New York drag queens who embark on a road trip to Hollywood, where they plan to compete in the Drag Queen Of America pageant. Along the way their car breaks down, and they find themselves stranded in Snydersville, a run down hick town in the middle of nowhere. During their two day stay in the town they quickly bond with many of the townspeople, often involving themselves in the townspeople’s problems. Vida, for example, comes to the aid of battered wife Carol Ann (Stockard Channing), while Noxeema befriends lonely widow Clara (Alice Drummond). The girls also provide a number of the local ladies with makeovers.

The film’s opening scene, set at a New York City drag pageant, is great fun, and includes cameos from many of the city’s biggest drag legends, such as Coco Peru, Candis Cayne, Hedda Lettuce and The Lady Bunny. Gay icon Quentin Crisp is briefly glimpsed as a pageant judge, while superstar RuPaul has a small role as the winner of the previous year’s pageant. There’s also an amusing post-pageant cameo from Robin Williams.

The film includes a bizarre subplot featuring Chris Penn as a homophobic sheriff who’s looking for the three heroines. Though he’s presented as an idiotic half-wit and is meant to provide comic relief, his constant barrage of anti-gay remarks are not in the least bit funny. In one particularly offensive scene, the sheriff sits at a bar, rambling on and on about all the things he thinks gay people do. It’s hard to believe that gay viewers would find his tirade amusing.

But for the most part, To Wong Foo is an enjoyable mixture of comedy and drama. The three leads look fabulous, though it’s never explained why they remain in drag after they exit the stage. And you have to hand it to the guys–they really dived into their characters, playing their glamorous roles with gusto.

The blossoming friendship between Vida and Carol Ann is quite moving and includes some nice commentary about tolerance–Carol Ann notices that her new friend has an Adam’s apple, and counts herself lucky to have found such a friend. When it’s time for the girls to continue on their journey, Vida and Carol Ann have trouble saying goodbye. These two characters give To Wong Foo it’s heart.

While not a great film, To Wong Foo, Thanks For Everything, Julie Newmar is a good one, and, with the exception of the scenes involving the Penn character, the film is a pleasant way to spend an afternoon.

Paul Rudnick’s Jeffrey (1995) is a most unusual romantic comedy–it’s about AIDS. Steven Weber stars as the title character, a gay man in New York who swears off sex out of fear of the disease. As soon as he takes his vow of celibacy, he meets his soul mate, the HIV positive Steve (Michael T. Weiss). Their on again, off again flirtation forms the core of the story, which offers some insightful commentary about life during the epidemic while also being screamingly funny.

Star Trek‘s Patrick Stewart steals the show in an Oscar worthy supporting role as Sterling, a wealthy, and quite flaming designer who madly loves his HIV positive chorus boy boyfriend (Bryan Batt). Sterling tries to convince Jeffrey to follow his heart–Sterling holds nothing back, delivering zingers that are worthy of Will and Grace.

1968’s Boom! written by the great gay playwright Tennessee Williams based on his play The Milk Train Doesn’t Stop Here Anymore, is a bizarre opus starring 36 year old Elizabeth Taylor as a 60ish character, and 43 year old Richard Burton as a character meant to be played by a man in his early twenties. Openly gay actor/playwright Noel Coward offers support as a man known as The Witch Of Capri–this role was originally offered to Katherine Hepburn, who declined. So Coward, a gay man, is actually playing a female role.

The story doesn’t make too much sense–super rich Taylor, dying of an unnamed disease, is visited on her private island by struggling poet Burton, though the reason for his visit is vague.

And finally, Shout Factory offers the notorious bomb of a musical Can’t Stop The Music, a highly fictionalized retelling of the formation of Village People, the disco era supergroup who were named after Greenwich Village, New York’s popular gay neighborhood–group members presented themselves as symbols of gay masculinity.

So how bad is the film? Actually, it’s not bad at all. It’s just a silly, plotless tale of a young man (Steve Guttenberg) trying to make it as a music producer with the help of his roommate (Valerie Perrine). Though the band is given little screen time, the songs are good and the musical numbers are splashy. Guttenberg and Perrine play off each other well, delivering their fast talking lines with tongues firmly planted in cheek.

Most interestingly, the film includes a supporting performance by a pre-transitioned Caitlyn Jenner, when she was still known as Bruce. If we only knew…….